There is no over-the-top design here, especially not on the leased aircraft — it's all out of the catalogue — but it ticks all the boxes on comfort and convenience and is ideally suited for the market in these routes. 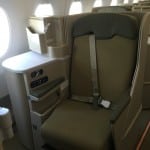 In a ceremony today in Toulouse, Vietnam Airlines has become the world’s second airline to fly the A350XWB aircraft — it is the first airline SkyTeam alliance member, and the first Asian carrier to fly Airbus’ latest NextGen aircraft.

This aircraft will allow Vietnam Airlines to boost its traffic in Europe for business and tourism, capitalizing on Vietnam’s recent lifting of Visa requirements for citizens of five high-demand European countries. The airline also has plans to upgrade its long-haul fleet with new aircraft, from both Airbus and Boeing, which will appeal to passengers and keep its long-haul routes cost-effective.

Skift was at Toulouse for the handover ceremony and a walk-through of the new cabin.

Opening Doors to More of Europe

Vietnam Airlines currently operates direct flights year-round to Hanoi and Ho Chi Minh City from Paris, Frankfurt and London Heathrow; and offers further connections throughout Europe through partner airlines as well as by special agreements in place with European rail companies (SNCF and Deutsch Bahn). Passengers on Vietnam Airlines can connect in Indochina, including domestic flights in Vietnam and Trans Indochina (Laos, Cambodia), as well as make onward connections through its own flights operating within the Asia Pacific region.

An airline spokesperson tells us that demand is high for both business and tourism between Europe and Vietnam, but especially concentrated in France, thus the airline’s selection of a launch route for the A350XWB in Paris, starting this October.

As the airline plans for the growth stemming from the government’s more liberal travel policies, and common interests in Europe in Vietnam for ongoing trade or as a holiday destination, Vietnam Airlines will upgrade its fleet by adding new Airbus A350XWBs and Boeing B787-9 Dreamliners on an accelerated schedule over the next three years.

In all, Vietnam Airlines will receive 14 new A350XWBs, the first four of which it will lease through AerCap Aviation Solutions, with subsequent aircraft purchased directly by the airline from Airbus. The operational and passenger experience advantages of the A350XWB make this an ideal aircraft for the airline’s high-demand Paris route, as the airline explains.

“We strongly believe that this wide body jetliner is shaping efficiency for our long and mid-long haul routes in the future,” Vietnam Airlines Vice President Trinh Ngoc Thanh told attendees gathered at the delivery ceremony today in Toulouse.

The first of these leased A350XWBs will fly Paris-Hanoi and Paris-Ho Chi Minh City routes starting in October and November of this year, respectively.

Mr. Thanh explains that the airline aims to keep up with trends in the industry for improved services and improved cabin products. “Vietnam Airlines is ‘reaching further’. Our corporate slogan conveys all aspects of the message,” he says.

The new A350 introduces a new livery, which will become the fleet standard, featuring golden lotus flower which both the airline’s corporate symbol, and the national flower of Vietnam.

This first A350XWB, like the next three leased A350XWBs to follow, features a three class cabin, which is comfortable and functional, though subsequent aircraft will receive additional product upgrades. Both the airline and Airbus confirmed that the decision to introduce an interim product for these first four aircraft made an expedited delivery of the A350XW possible.

An upgrade cabin product will feature in the further ten A350 aircraft which Vietnam Airlines will buy from Airbus directly.

In Business class, passengers can expect to find 29 fully lie-flat seats, arranged with singles at either side and double seating in the centre, in-flight video on demand entertainment with 15-inch screens, and power ports.

The 45 Economy Deluxe seats, in a 9-across (3x3x3) configuration, include a 91 cm pitch and a 10.6-inch IFE screen, and power outlets. This second-cabin product is similar to other Economy+ cabins around the world, with the only differentiation that passengers have additional space, extra services, and more privacy. On later A350s, Vietnam Airlines will debut a fully differentiated Premium Economy product.

Economy class is comfortable, taking advantage of the A350’s roominess and its open, light, airy feel. A total of 231 seats in a 9-across (3x3x3) configuration give everyone room, including 18” seats with a 81 cm pitch. Economy passengers also get video on demand IFE with a 10.6” screen.

Vietnam Airline’s A350 XWB is also equipped for Wi-Fi service and mobile connections for SMS.