Travel Habits of Americans: Almost Half Didn’t Take a Single Day Off This Summer

Americas are overworked, and not taking enough days off in summer for a long vacation, much to the detriment of the overall travel industry here in U.S.

Earlier in April, we asked Americans about their vacation plans for summer in 2014, and the results from our Google Consumer Survey said a majority, about 63 percent, did not plan on taking one. Out of that, more than half said they couldn’t afford it. Only about 15 percent of Americans said they would take a long summer vacation this year. About one-fifth of Americans said they planned on taking some long weekends over the summer.

Cut to September now — post-summer — and we decided to follow up on this. We asked a new question last week, “Now that summer is over, how many days of vacation did you take this summer?” Turns out, almost 43 percent of adult Americans said they did not take a single day of vacation this summer. Which, of course, is a depressing number and jibes with our overworked states. A decent chunk, 26.5 percent, said they took more than a week off of time.

Important: This survey — not served to Skift users — was administered to about 500+ members of the U.S. adult internet population from Sep 3-Sep6, through Google Consumer Surveys. The methodology is explained here. 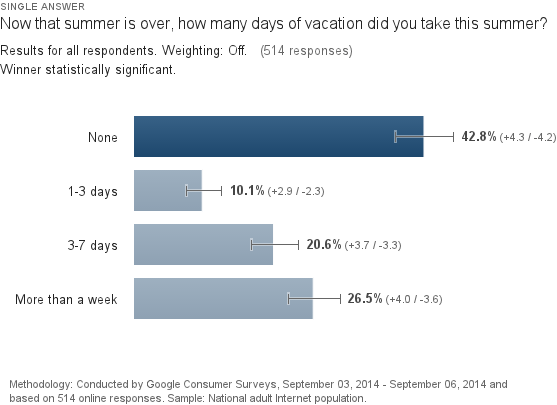 » Breakdown by sex, Chart 2 below: More U.S. women didn’t take any vacation days in summer 2014 than men. And overall, women are more overworked than men this summer, having taken fewer vacation days than men, when they didn’t take days off from work. » Breakdown by income, Chart 3 below: This is obvious from understanding current state of U.S. economy: Lower income Americans are taking lot less days off than richer Americans.

» Breakdown by region, Chart 4 below: The U.S. West took more summer days off than any other part of America, while U.S. Midwest took the least. » Breakdown by region, Chart 5 below: Urban America took more summer days off than rural or suburban residents this year. » Breakdown by age, chart 6 below: Turns out, older Americans took less days off this summer, while the young did more. There are lots of nuances here that require further study beyond the scope of this survey.