As Europe's largest urban redevelopment project, HafenCity is attracting top architects and planners, but will it attract tourists? 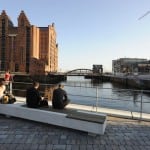 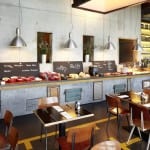 Hamburg’s audacious Elbphilharmonie Concert Hall is scheduled to open in 2017 at the cost of $785 million, seven years behind schedule and about $450 million over budget following severe construction challenges.

If, however, the building manages to eventually accomplish for Hamburg what the Opera House did for Sydney—as is the intention of Swiss architecture firm Herzog & de Meuron, who accomplished something similar with London’s Tate Modern—people will say the design had to be monumental in its aspirations and scope.

The Elbphilharmonie anchors Hamburg’s HafenCity (Harbor City)—Europe’s largest urban redevelopment project. Located at the entrance of Germany’s main shipping port, HafenCity was designed around today’s best urban planning practices, with almost half of a metropolitan inner city to use as a live test bed.

In 1997, Hamburg’s civic leaders proposed to build a new port across the Elbe River and convert the existing port, occupying 40% of the urban core, into a 21st century city of the future. There were only a few streets with warehouses salvageable for adaptive reuse. Meaning, the rest of the almost 400 acres of waterfront real estate was an empty slate for Europe’s top urban planners and architects to conceptualize and build a highly livable, mixed-use urban utopia.

The city granted land plots to developers submitting the most innovative designs, and every building was required to incorporate five-meter-high commercial spaces at street level to attract both Hamburgers and out-of-town visitors. Because the biggest challenge for this monster endeavor was how to make the water-bound HafenCity an organic extension of the mainland, versus remaining an island both geographically and socially.

During our conversation in HafenCity’s HQ office with Susanne Bühler, communications director of HafenCity, she emphasized three priorities dictated by the masterplan. There needed to be an organic mix of residential, commercial and green spaces in 10 distinct districts. It was important to attract families to live in HafenCity, and rents needed to be as accessible as possible to attract the widest range of resident demographics.

“It’s not easy to create a city,” said Bühler, who has a knack for understatement. “Building a city is also a learning process,” alluding to the question: How do you infuse such a large city built almost from scratch with enough bodies to give it, what Bühler calls, “urbanity?”

In comparison, there are 14,000 residents presently living in Hamburg’s existing city center.

“The social structure is really heterogeneous, and that’s important because many people think HafenCity might be mostly for rich people, but in fact it’s not true,” explained Bühler. “It’s also important that we have 14.5% of households with children, and this is really good.”

The western half of HafenCity is now mostly complete. The east side, which is presently almost entirely vacant, welcomed its first two major new tenants this spring.

The Greenpeace Germany building opened as part of a waterfront complex with design-centric art galleries and restaurants, capped by residential housing with a large children’s park overlooking the water. The Greenpeace inner atrium is open to the public to explore exhibits chronicling the organization’s exploits worldwide.

Nearby, HafenCity University welcomed its first class of 2,000 students studying architecture, urban planning, engineering and “metropolitan culture.” As an aside, the new underground train station near the school has become a bit of a thing among public transportation aficionados due to its nightclub ambience.

Bühler lights up during the discussion about the university and its role in this next generation livability laboratory.

“You really feel this new sense of energy now with all of these young people strolling around here,” she said. “It’s quite nice for us.”

Bühler was even somewhat excited about the Occupy Movement demonstrators who were protesting the rising taxpayer cost of the Elbphilharmonie during the weekend previous to our meeting. Hundreds of heavily armed riot police with heavy-duty military vehicles and water cannons had rimmed HafenCity to dispel the protesters, a few of whom clashed with police.

For Bühler, however, she said any kind of disruption brings a level of public discourse and confrontation that’s important during the birth of any city, which for her is much preferred to a static environment devoid of contradictory viewpoints.

“Although it is kind of a financial debacle, we really believe in the Elbphilharmonie,” she said. “This is a landmark and it’s important for HafenCity, but also Hamburg to compete among cities globally. There was a demonstration, this is life. But this is also a sign of normalcy when people come to demonstrate, and we feel this type of debate defines what a real city is.”

Presently, 25hours Hotel Hamburg HafenCity is the only hotel in HafenCity, with numerous branded hotels and independents located nearby in the historic core. When it opened in 2011, 25hours made a lot of buzz in hotel design circles with a bright orange shipping container inside the lobby.

More hotels are scheduled to open in the harbor city beginning in 2016, including a 200-room hotel in the Elbphilharmonie.

A new conference hotel is scheduled for development near the cruise ship docks, and this fall, work breaks ground on a family-themed hotel with extra large suites close to HafenCity’s upcoming central park development.

The 13-room Stadthaushotel Hamburg is also developing a 90-room property in HafenCity, designed for, and staffed by, people with disabilities.

Waterfront cafes are sprouting up everywhere because by the time HafenCity is complete, the project will add almost eight miles of new seaside promenades. Meanwhile, along each sliver of water in the channels where freighters once docked, dozens of independent restaurants and shops cater to both locals and tourists.

With only 2,000 permanent residents so far, there is somewhat of a sense of emptiness on a few of the streets, but at the same time there’s a very real sense of community. Locals are consistenly creating special events ranging from concerts to flea markets, and seemingly everyone rides bikes in HafenCity to gather in all of the new parks and plazas.

After 72 hours in HafenCity without leaving its borders, you start to wonder what constitutes a “real” city, and even begin to question the question. HafenCity is a bit of a bubble, of course, which is inherent in any project of this kind during the early phases of development. After leaving in a taxi and arriving at Hamburg’s main train station to go home, suddenly the “real world” felt somewhat chaotic and disarming in contrast.

That’s HafenCity’s value as a travel destination. By playing the role of a foil to the other half of Hamburg’s downtown core, you can experience the duality of the two and make your own decisions about the potential future of urban living.

“What tourists find interesting is that HafenCity isn’t for tourists; we didn’t build this as a kind of touristic enterprise, although we did expect tourism,” said Bühler. “We tried to make [HafenCity] fit well with the historic city, so it will be a little bit touristic, but it will be Hamburg…. Really, it’s a new definition of an inner city.”