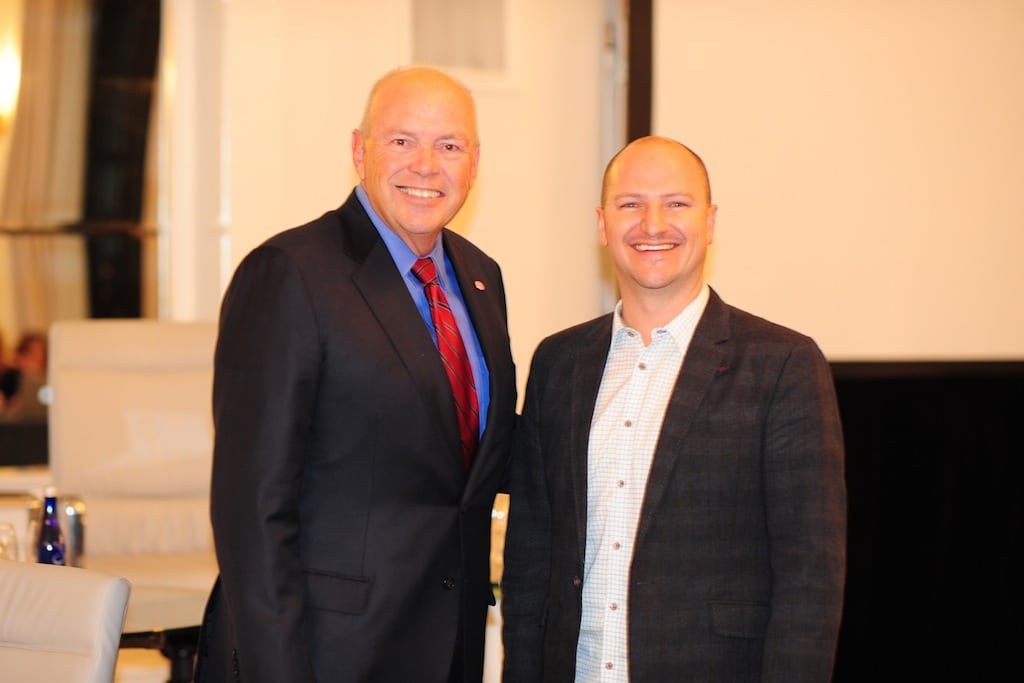 Skift Take
If anyone could predict what’s in the pipeline for the hospitality industry, it’d be Lee Pillsbury. But the pace of innovation today means that his venture fund is also in search mode to find what the next Hilton or Expedia will be.
— Samantha Shankman
Share
Tweet
Share
Post
Send

There are hundreds, if not thousands, of startup founders that would pay for the insights that Lee Pillsbury, co-founder and CEO of Thayer Lodging Group and advisor at Thayer Ventures, has accumulated over the years.

After his company joined the top five percent of hotel investment firms, Pillsbury worked with the principals of Quest Hospitality Ventures to launch Thayer Ventures. It has since invested in travel companies including Hipmunk, TripBam, Duetto, and Liftopia.

Pillsbury says he built a venture capital fund focused on the travel industry due to the founders’ industry knowledge, the vast opportunities present in the enormous global sector, and the fund’s ability to help portfolio companies succeed.

Skift spoke with Pillsbury at the Revenue Strategy Summit in New York City last month. Pillsbury talked about what he looks for in a startup, why he’s not worried about Airbnb, and how hotels could likely be the next industry that Apple disrupts.

Skift: Let’s start with Thayer Ventures. Why did you start a venture capital fund focused on the travel industry as opposed to a general fund?

Lee Pillsbury: The Kauffman Foundation came out with a study last year that suggested venture capitalists have done very poorly over the past decade and that it’s been an unsuccessful investment strategy. Travel, as a class, has not been a good investment or a good place for institutional investors to be.

We think that’s driven by three problems with venture: One is underwriting a new idea. In a complicated value chain like the travel industry, an idea might appear to be a good one, but when you really understand the business you recognize that it’s not.

A great example is the check-in kiosk that is so successful in airports and a complete failure in hotels. It’s obvious to a hotel investor why that wouldn’t work and wouldn’t be appealing to guests, but a Silicon Valley capitalist might logically think, “If it works in the airport, we’ll put it in the hotel lounge.” Some venture capitalists thought that and lost a lot of money. So, the first reason for a specialized fund is industry knowledge. We think the importance of industry knowledge has been underrated in the venture world.

The second reason is that the travel space is enormous. Travel and hospitality is the largest employer in the United States. This is an enormous global industry. There are lots and lots of tentacles and lots and lots of players and different pieces. It’s not just evaluating if the kiosk is a good idea, it’s the ability to understand the whole value chain, if the idea is going to fit or not fit in that value chain, and who the competitors are. Competitors are not always obvious in this business.

Duetto and Nor1 are both dealing with Four Seasons. The CEO of Four Seasons, Allen Smith, is a long-time friend of mine. One CEO to another, I can pick up the phone and call him and say, “Hey, I’d like you take a look at this, I’d like you to tell me what you think, or I’d like your revenue managers to jump on this.” That’s something that we can do that Sequoia can’t do. I couldn’t do it in the roofing business. If someone said, “I invented a new shingle invest in my business,” I couldn’t possibly add any value there. But our advisory board can add a lot of value to companies here.

One of the benefits to us is that because of these reasons companies want us in their capital stack. We’re increasingly finding companies that come to us and say, “We’re out talking to the venture community, but we really want to talk to you because anybody can write a check but you guys can do more for us.”

We’re a small fund. We can’t compete with Sequoia or any of these big groups, but even those big groups now are beginning to recognize us and say, “If Thayer Ventures underwrites you in this space, we’ll be there, but we want Thayer there too.”

Skift: What makes one startup succeed over another? How do you discover new startups and how do you vet them?

Lee Pillsbury: We’ve looked at well over 800 in the space, and we’ve invested in 15, so it is weeding out the needle in the haystack. I will tell you from having spent a long time in strategy that it’s 15 percent inspiration and 85 percent perspiration. When it comes to an investment in a startup, you’re betting on the jockey much more than you’re betting on the horse.

It is inevitable that the [first] business plan isn’t going to work and that it isn’t going to turn out exactly the way that everybody thought it was. What it comes down to is the CEO. Are they dominant and are they impatient? I want a CEO that’s got those two characteristics. I’m damn well going to make the world the way I want it to look and I’m not going to wait a whole long time to do it.

Skift: Are you seeing hotels and hospitality brands open up to working with startups more than they have in the past?

A 500-hotel company has got to be more aggressive in this area than the company with 3,000 hotels. One explanation is that the bigger companies have bigger staffs and they’re more inwardly focused, I don’t know if that’s the reason or not, but that’s a characteristic of them.

There has been disruption in the value chain in the hotel industry for 100 years. It started in 1907 when a guy named Ellsworth Milton Statler started the first chain of hotels in the United States. It accelerated in 1927 when Conrad Hilton built his first hotel in Abilene, Texas, and started the Hilton chain. In the 1950’s Kemmons Wilson came along and did Holiday Inns.

In the second half of the 20th century, the disruptions occurred in the balance sheets, separating ownership and management, the financial engineering, and real estate investment trusts. In ’96, Expedia arrived and launched a whole other set of disruptions that have taken place down towards the consumer. Disruptions have moved over a hundred years closer and closer to the consumer.

One of the interesting things to think about, today, is Apple. Apple has had a history of destroying industries. It destroyed the music industry, then the cellphone industry, and now the PC industry.

Skift: Do think Apple can touch the hotel industry?

Skift: Why can’t hotel software be as easy as Apple software? Hotel software is horrible from a user experience perspective.

Skift: So how long do you think it will be before the major players, who are not adopting right away, have before they have to adapt or risk becoming obsolete?

As far as how long can big companies survive? I don’t know. The graveyard is full of companies that didn’t adapt.

Skift: What on the user experience side excite you for 2014?

Skift: So you don’t think that tech beyond a certain point has a play with the check-in experience?

Lee Pillsbury: No, I want to be greeted when I walk into a hotel. I want somebody to say, “Welcome, Mr. Pillsbury. It’s nice to have you here.” And I don’t want it to be Siri.

Skift: So you don’t think the hotel check-in desk is going away?

Lee Pillsbury: No, but it may take a different form. I have a lot of young people in my company who think that they’re going to invent something to make it go away, but unless they invest something that’s going to suck up, I’m not buying it. I travel 200 nights a year all over the world. I don’t want the airline experience 24 hours a day. I’m in a place and what makes it a place is people.

Skift: What are your thoughts on Airbnb and the sharing economy?

Lee Pillsbury: A parallel is to think about that time sharing industry in the 1970s and 1980s and the exchange network that RCI and Interval International built. How much impact did they have on hotels and second-home vacation homes? They were a factor, but it was not a big factor.

Skift: Less than one percent of all tourists in New York City stayed in an Airbnb last year.

Lee Pillsbury: So if it got to 4 or 5 percent, would hotels feel it? How much of that one percent was because guests couldn’t get into a booked hotel or they couldn’t afford it? Occupancy in Manhattan is through the roof.

I’m not worried about it right now, but maybe my nephews and nieces should be. I don’t think it’s going to have a significant impact in my lifetime.