A U.S. bankruptcy judge approved the antitrust settlement between American Airlines and US Airways’ and the U.S. Department of Justice today, according to the Fort Worth Star-Telegram.

The Associated Press’ David Koenig tweeted that the last-ditch effort by consumers to show that they would be hurt by the merger failed because the “failed to show how the merger would hurt them.”

.@AmericanAir hearing now over after 20 minutes (and nearly two years). But of course, bankruptcy case will still continue for some time.

Judge is wrapping up @AmericanAir hearing, says the written order will be forthcoming. But he has a few questions about AA's proposed order.

Judge: @AmericanAir “settlement is fair and equitable and in the best interests of the estate," doesn't require new vote by stakeholders.

The stock market remained cautious on the news, with both US Air and American remaining steady. American Air has not confirmed the previously announced merger date of December 9, but expects to issue an update shortly.

“Today’s rulings by the Court are another important step in our path toward emerging from restructuring and closing our planned merger with US Airways,” said Mike Trevino, an American Airlines spokesman. “The new American will compete on a global scale with a network that benefits our people, our customers and the communities we serve. With the court’s rulings today, we now intend to close the merger on December 9.” 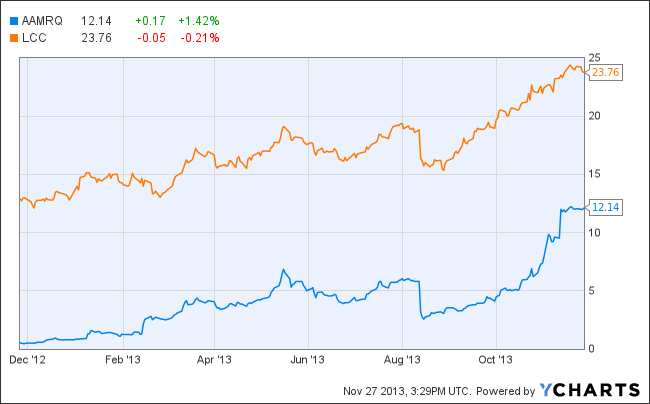 Subscribe Now
Tags: aa-us air merger, american airlines, bankruptcy, us airways
Photo Credit: Pilots from both airlines gather for a photo with Doug Parker, left, of U.S. Airways and Tom Horton of American Airlines after the announcement of the airlines' merger during a news conference at Dallas-Fort Worth International Airport, Thursday, February 14, 2013. Ron T. Ennis / Fort Worth Star-Telegram/MCT