Why Wall Street Heaps Love on Priceline and Disses Expedia You have to wonder whether Priceline relished breaking the $1,000 per share barrier or eclipsed the mark fearfully. With such records come very great expectations.

Wall Street loves Priceline, which broke through the $1,000 per share barrier last month, and at mid-day yesterday its shares were trading at around $1,049.

Why is there such a huge gap? 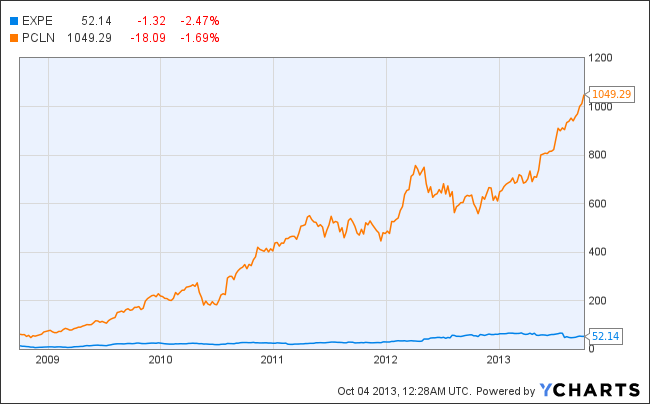 By just about any measure, Priceline is the faster growing company of the two.

In the second quarter of 2013, for instance, Priceline saw its room nights sold metric increase 38.2%, compared with just 19% growth for Expedia.

In addition to its search engine marketing spend, one reason Priceline can increase its hotel room nights faster than Expedia does is that Priceline has a very simple agency/commission model that it uses with hotels while Expedia has a more complex mix and match of merchant and agency models.

With the simple model, Priceline’s Booking.com unit, which currently offers 351,000 hotels and other lodging alternatives, can sign up new hotels faster than Expedia can with its more complicated merchant model, or merchant/agency model mix.

And consider another metric: Priceline’s 2012 gross bookings increased 31.4% to $28.5 billion, while Expedia’s 16% increase in gross bookings to $34 billion in 2012 was considerably more sluggish.

Investors also look for a consistent growth story. While Priceline over the last couple of years has fairly consistently met or beat analysts’ expectations, Expedia’s track record is up and down.

For awhile in 2012 it seemed that Expedia had finally gotten over the hump, and was ready to start challenging Priceline. For the prior couple of years, Expedia had been preoccupied with updating its technology platform, and migrating its far-flung brands onto it. That job has mostly been accomplished now.

But, Expedia’s execution has been a mixed bag in 2013. Expedia has experienced much-publicized difficulties at its Hotwire unit, partially at the hands of Priceline, and Expedia’s room-night growth in the second quarter slowed, with some of the problems tied to difficulties in using TripAdvisor as a marketing channel.

Priceline also gets a lot of street cred for its focus, although recently it is becoming less focused.

Priceline.com in the U.S. offers air, hotels, and cars, and the Priceline Group is putting resources into expanding its Rentalcars.com business, and recently acquired metasearch company Kayak, but Priceline’s primary focus is hotels.

In contrast, Expedia Inc., with more than a dozen travel brands and B2B solutions, sells air, hotels, cars, vacation packages, tours, cruise, leisure and corporate travel, and advertising, and must manage much broader interests than hotels.

In the scheme of things, you can make arguments either way on whether that is a plus for Expedia or a minus. Expedia has less focus on the lucrative hotel sector, but on the other hand, it has more revenue diversity, too.

Still, despite Priceline’s much more compelling growth story than Expedia’s, you have to wonder if that $1,049 Priceline share price, and its eye-popping $54 billion market cap, might be a little inflated.

Priceline has warned for many quarters in a row that investors should expect its growth to slow, given the sheer size of the company.

And, the grossly favoring of Priceline over Expedia, as seen in the depth of their share price disparity, seems somewhat to be the Wall Street equivalent of pack journalism.

After all, in due time, bubbles like Priceline’s have a tendency to burst.

Photo credit: It's been up, up and away for Priceline's stock price, and it broke the $1,000 mark for the first time last month. YCharts