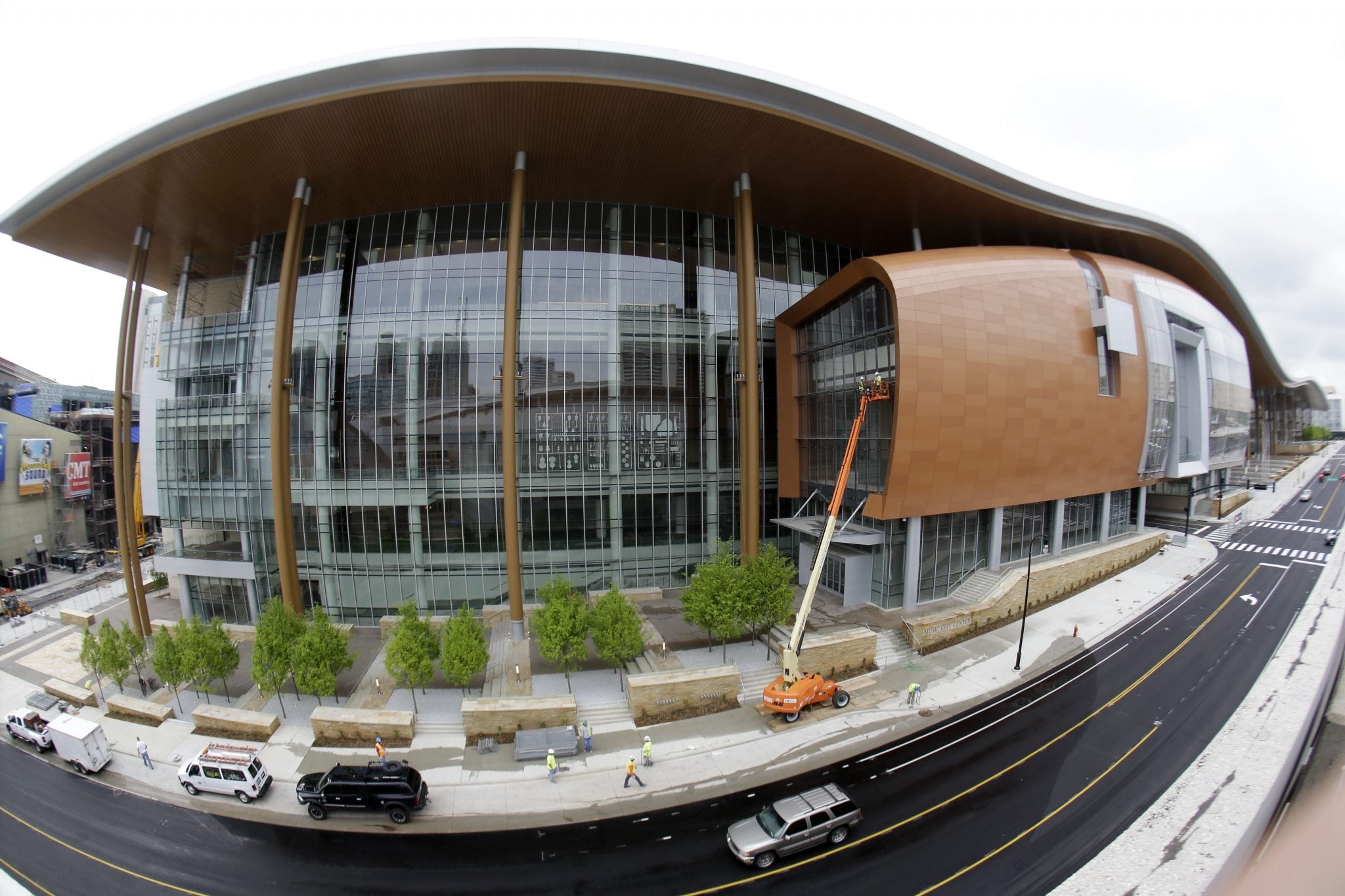 Skift Take
Nashville is looking to diversify its tourism market with its newfound popularity thanks to TV show Nashville, but controversial building costs were a gamble as business travel is just starting to rebound.
— Samantha Shankman
Share
Tweet
Share
Post
Send

A new convention center in Nashville is transforming the look of downtown with a wavy roof dominating six city blocks, but tourism officials hope the eye-catching facility will also show business travelers a revitalized Music City.

The Music City Center has generated heated debate within the city over its $623 million price tag. Critics also contend the city is jumping into an oversaturated market for conventions.

But with an all-star line-up of musicians ready to cut the ribbon on the Music City Center May 20, tourism officials say the facility will build on Nashville’s well-known brand, which already attracts leisure travelers. The city has also been relishing positive publicity from ABC’s show, “Nashville,” along with becoming nationally known for restaurants and a growing cultural scene beyond just country music.

“The center opening helped drive more restaurants, the TV show created some newfound awareness and at the same time, people are starting to see there is this creative buzz, both musically and through the other creative arts,” said Nashville Convention & Visitors Bureau chief Butch Spyridon.

The building is about 1.2 million square feet and features a 350,000-square-foot exhibit hall that’s big enough to hold a commercial airliner and allows for tractor trailers to drive right onto the exhibit floor. It also has two ballrooms and about 60 meeting rooms.

One end of the roof features a guitar body-shaped design and the other side has a live-plant roof of succulents designed to resemble rolling green hills. Inside the center’s lobby, visitors can scroll through images and hear songs in an interactive exhibit from the Nashville Songwriters Hall of Fame.

The convention center has already booked future events with 150 groups, including some big names like the National Rifle Association, which will bring up to 40,000 people to Nashville in 2015. The convention center will also host the annual convention for the Women’s Basketball Coaches Association next spring, which is part of the NCAA Women’s Final Four games that will be held across the street at the Bridgestone Arena. Expected attendance for the games and the convention is some 20,000 fans.

As large as the convention center is, Music City Convention CEO Charles Starks said Nashville didn’t want to have the biggest.

“We could never build a building that is as big as Chicago, Vegas or Orlando, because we don’t have the infrastructure to support that,” Starks said. “So we looked at where that sweet spot was and being able to accommodate about 75 percent of the marketplace was where we thought was a great position for us to be in.”

The city already has the Gaylord Opryland Resort and Convention Center, which is about 15 minutes from downtown but geographically isolated from the rest of the city.

The construction has spurred development in a part of the downtown area that has been mostly stagnant. A new Johnny Cash museum is also opening nearby and more than 1,200 new hotel rooms are being built in anticipation of the increase in convention travelers. The number of hotel rooms sold in Nashville topped 6 million last year, according to data provided by Smith Travel Research.

Debbie J. Culp-Sales, vice president of sales for Destination Nashville, a company that helps meeting planners arrange events in the city, said groups that stopped coming to Nashville years ago are returning and some who have never held an event here are reconsidering.

Vanessa and Allan Thompson, of Durham, England, were drawn to visit Nashville by the music of Johnny Cash and Hank Williams and were impressed with the live music pouring from the bars on Lower Broadway.

“Although we aren’t country music fans ourselves, we just like seeing different things and how different cultures and different people enjoy their music,” Allan Thompson said. “You can see by coming here that it is massive.”

“If you love music, just come to Nashville,” Vanessa Thompson chimed in.