SkiftStats: Water use in hotel industry & the coming crisis in Asia-Pacific

Some fascinating and troubling numbers on water usage in the tourism and specifically the hotel industry, in this eye-opening report prepared by a leading research consortium supported by Australia’s EarthCheck Research Institute. The report cautions that water scarcity could severely limit the growth of the booming Asia-Pacific tourism industry, and offers strategies and tactics for reducing consumption and inefficiencies in key areas of water use, such as optimising laundry wash formulas and rinse cycles to reduce overall water consumption.

As part of the report, it also benchmarks a global water usage per guest night in the hotel industry, and while the numbers tell one aspect of the story, the cultural reasons for the varied water use, not explored fully in the report, would be a full book in itself.

Some charts from the report: 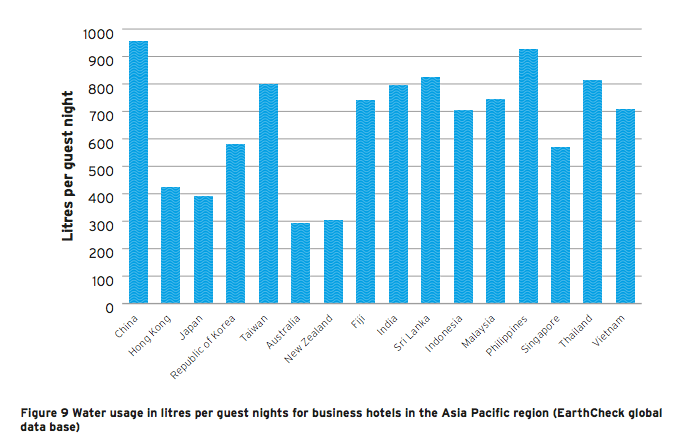 The relatively low consumption levels in the Pacific are likely to be influenced by the water efficiencies which have been achieved in Australia and New Zealand over the past five years (and the large number of properties in the database, relative to other nations). Both countries have benefited in recent years from dedicated marketing campaigns to influence consumer behaviour and hotel managers in relation to the need to conserve water . Overall, European hotels are on average more water efficient than those in some parts of the Caribbean, the Middle East and South and East Asia.

A comparison of business hotels in Asia Pacific shows a wide range of 292 litres per guest night in Australia, compared with 956 litres per guest night in China. Hong Kong and Japan, and to some extent the Republic of Korea and Singapore, display medium efficiency, whereas the remaining countries are characterised by high water intensities. High usages in some Asian countries are likely to be related to extensive use of water for garden facilities, including elaborate water features both inside and outside the building.