The tourist Obama gawks at Petra on his trip, like millions have before This will surely give Jordan, about the only "peaceful" country in that region, a great tourism marketing platform to build on its economy.

President Barack Obama set aside the Middle East’s tricky politics Saturday to marvel at the beauty of one of the region’s most stunning sites, the fabled ancient city of Petra.

“This is pretty spectacular,” he said, craning his neck to gaze up at the rock faces after emerging from a narrow pathway into a sun-splashed plaza in front of the grand Treasury. The soaring facade is considered the masterpiece of the ancient city carved into the rose-red stone by the Nabataeans more than 2,000 years ago. 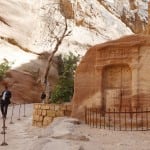 Obama’s turn as tourist capped a four-day visit to the Middle East that included stops in Israel and the West Bank, as well Jordan. The White House set low policy expectations for the trip, and the president was returning to Washington with few tangible achievements to show. Aides said his intention instead was to reassure the region’s politicians and people — particularly in Israel — that he is committed to their security and prosperity.

Curious residents and picture-taking tourists lined the streets of modern Petra as Obama’s motorcade wound toward the entrance to the ancient city. The president, dressed in khaki pants, a black jacket and hiking boots, began his walking tour at the entrance to the Siq, a narrow, winding gorge cutting between two soaring cliffs.

The path opened into a dusty plaza with the massive columned Treasury as its centerpiece. Obama declared the carved monument is “amazing.”

The Bedouins named the building the Treasury because they believed that urns sculpted on top of it contained great treasures. In reality, the urns represented a memorial for Nabataean royalty. Over time, historians have disagreed on the Treasury’s purpose. However, a recent excavation proved that a graveyard exists underneath it.

The Nabataeans established Petra as a crucial junction for trade routes linking China, India and southern Arabia with Egypt, Syria, Greece and Rome. The city flourished until trade routes were redirected in the seventh century, leading to Petra’s demise.

Petra is Jordan’s most popular tourist attraction, drawing more than a half million visitors yearly since 2007. It may be familiar to many people who saw the 1989 movie, “Indiana Jones and the Last Crusade.” Some scenes were filmed in the ancient city.

High winds and overcast skies nearly grounded Marine One, the presidential helicopter, in the Jordanian capital of Amman, which would have forced Obama to scrap the tourist stop. But the weather cleared enough for him and his delegation to make the hour-long flight across Jordan’s rugged landscape, arriving in Petra under bright sunshine.

The president departed Jordan after the tour and was due back in Washington late Saturday.