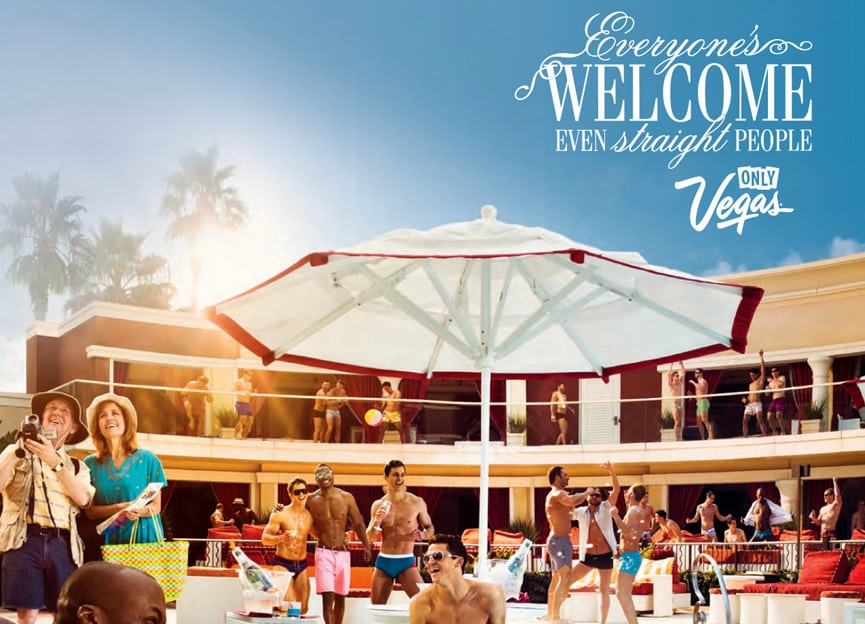 Skift Take
From actual desegregation in the middle of last century to now multi-ethnic, multiracial, diverse city, you’ll have to admit Las Vegas has certainly come a long way even if you don’t agree with the cliches in these ads.
— Rafat Ali
Share
Tweet
Share
Post
Send

Advertising for destinations, especially in print, usually works in cliches. You have to, you’re trying to capture the essence or promise of a destination in one image, one page. Mostly these cliches are meant to make you stop and stare.

And this new print ad campaign from Las Vegas tourism authority LVCVA surely does that by stretching the boundaries of cliches, in a mix of mock earnestness and irony. The five ad series with the tagline “Everyone’s welcome, even straight people” is aimed at gay and lesbian travelers with the positioning to move beyond what it calls lip-serving “gay-friendly” to gay-centric, at least in the stylishness of Las Vegas lifestyle.

That LVCVA decided to go with this particular execution, despite the right goal, does have the capacity to offend even the LGBT community, as evidenced by comments on this blog. What do you think?

Click on the thumbnails below to see the full ads: LGBT advertising is nothing new. It’s been here for decades. For too long, brands have told us they’re “gay-friendly,” shown us a gratuitous same-sex couple, slapped a rainbow logo on it and called it a day. Las Vegas decided to do something different. To imagine a world where – every once in a while – we have to remind the heteros that Las Vegas still belongs to them, too…so long as they’re willing to share.