Travel in the northeast U.S. is slowly heading back to normal, with some caveats Skift Take
The northeast has the U.S.’s best combination of roads, rail, and planes, so despite the amazing damage it’s a role model for how a region can recover from a natural disaster.
— Jason Clampet
Share
Tweet
Share
Post
Send

Travel in the Northeast creaked back into motion Wednesday as Superstorm Sandy receded, allowing workers to check runways and railroad tracks for water damage.

It was a grinding, patchy recovery that made it clear that stranded travelers will struggle to get around for days to come.

All of New York’s three major airports were expected to be open Thursday morning but under reduced schedules. Most Northeast rail service remained suspended. In New York City, some buses were running and subway service was expected to restart Thursday. 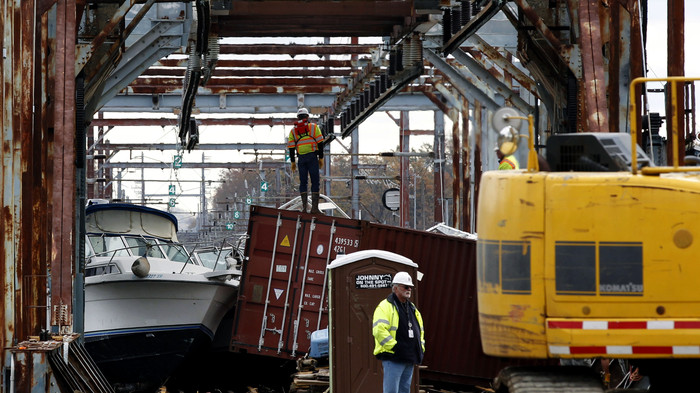 The busy Northeast travel corridor ground to a halt when Sandy slammed into New Jersey on Monday evening. Train tunnels flooded, power went out, and forecasts of high winds forced airlines to cancel thousands of flights.

FlightStats said the storm has caused more than 19,000 cancellations, including 2,820 cancellations Wednesday. The loss of East Coast flights stranded tourists in New York and kept travelers stuck in Hong Kong. The lack of trains left suburban commuters without a way into work.

On Wednesday, the first trickle of air travelers reached New York since the storm hit. John F. Kennedy International and Liberty Airport in Newark, N.J., both opened, but flights were limited. The airlines that did operate were mostly positioning planes for a fuller schedule on Thursday.

Peter and Sheryl Knight were scheduled to fly home to Washington from Hong Kong on Wednesday, but their Cathay Pacific Airways flight via JFK was canceled. The airline put them on a flight for Chicago on Thursday, where they would board another flight home.

“Hong Kong’s not a bad place to be for another day,” Peter Knight said.

Like the rest of the region, the airlines and airports are trying to overcome power outages, lack of mass transit, and the chance that salt water might have damaged equipment down to the runway lights.

“Considering how bad it is, I think the airlines have done a pretty good job,” said George Hobica, who founded the airfarewatchdog.com travel website. He’s booked on a flight from JFK to Los Angeles on Thursday afternoon and expects the flight to take off, although he expects lingering delays as airports continue to recover from the storm.

New York’s third major airport, LaGuardia, will open at 7 a.m. EDT on Thursday, the Port Authority of New York & New Jersey said on its website. LaGuardia has just two runways that jut out into bays and are only a few feet above sea level. They were inundated by Sandy’s huge surge.

American Airlines and Delta Air Lines and Southwest Airlines said they plan to restart LaGuardia flights on Thursday morning, with Southwest joining them in the afternoon. Delta spokesman Morgan Durrant said the airline intends to start landing planes around 7 a.m. and hopes to operate half of its normal LaGuardia schedule, while American is aiming for 70 percent.

“There is some damage to our offices and facilities,” American Airlines spokeswoman Andrea Huguely said. “It’s not pretty, but we can operate. Our employees are cleaning up for our customers.”

Airline employees will face challenges getting to work. Not only is mass transit severely restricted, but driving in will be more difficult. Mayor Michael Bloomberg said that only cars with at least three passengers would be allowed to cross a bridge or enter a tunnel.

“There are a lot of contingencies before we can reopen at LaGuardia,” Southwest spokesman Paul Flaningan said. “It’s still barricaded at the front entrance, which makes drop-offs from taxis and buses difficult.”

Amtrak said it plans to restore some service on Friday to and from New York City, which has been without intercity train service since it was walloped by Superstorm Sandy.

The railroad said the removal of water from flooded train tunnels under the Hudson and East rivers is continuing so that repairs to tracks, signals and power systems can be made. A Friday schedule is expected to be released Thursday.

Airlines continued to waive fees to change tickets for flights to New York airports. Delta and United said that anyone who planned to fly there through Saturday could change their ticket. However, the rebooked travel still had to begin by Nov. 9, giving travelers a relatively narrow window to make their trip.

Airports in Washington and Philadelphia reopened on Tuesday.

Associated Press writers Joan Lowy in Washington and Kelvin Chan in Hong Kong contributed to this report. Copyright (2012) Associated Press. All rights reserved. This material may not be published, broadcast, rewritten, or redistributed.