For a luxury brand with only a handful of properties, Trump talks a big game. But then again, talk is what Trump specializes in.

Donald Trump, the U.S. billionaire real-estate developer, is seeking to put his name on hotels in Argentina and Brazil as he expands his brand in Latin America. 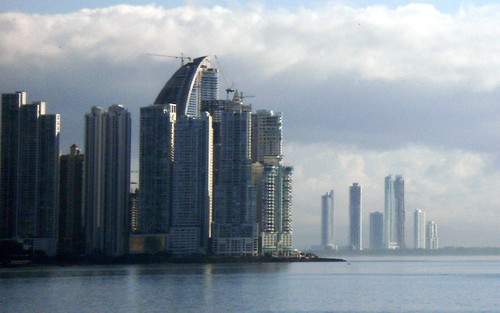 The Trump Hotel in Panama was the company’s first international hotel. Photo by Bruce Dailey.

The Trump Ocean Club in Panama City, the company’s first hotel outside the U.S., is attracting guests even after a boom in hotel construction in Latin America’s fastest-growing economy, he said in an interview in Panama City yesterday.

“We play at such a different level than all those other hotels, it’s not really affecting us,” said Trump, who is Donald’s 28-year-old son. “If you look at the hotel guests, it’s all executives.”

Newland International Properties, the Ocean Club developer, is continuing “friendly discussions” with bondholders after defaulting last year on $220 million of debt to construct the 70-story hotel and apartment complex, he said.

Panama’s gross domestic product expanded 10.4 percent in the second quarter from a year earlier on construction and a $5.25 billion widening of the Panama Canal.

The International Monetary Fund cut its economic growth forecast for Latin America and the Caribbean for this year and next as the global environment deteriorates.

The region will expand 3.2 percent this year and 3.9 percent in 2013, compared with the previous estimates of 3.4 percent and 4.2 percent, the Washington-based lender said Oct. 9 in its World Economic Outlook. Brazil will expand 4 percent next year, compared with a 4.6 percent estimate in July, while Mexico’s forecast was lowered to 3.5 percent from 3.6 percent.