Georgia’s Black Sea resort of Batumi was once a bleak site: Roads were dotted with potholes, the city was pitch dark at night, running water was scarce and the city’s best hotel was infested with rats. Today Batumi glitters with neon lights and luxury high-rise hotels dot its skyline; soon the city will even boast a fountain flowing with Georgian grape vodka. 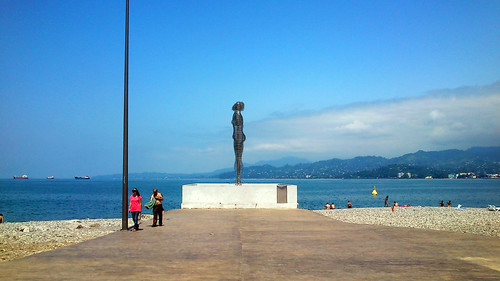 Batumi, Georgia is reinventing itself as a tourist destination to improve the domestic economy. Photo by Olga.

The transformation of the ancient city of 180,000 near the border with Turkey is a vivid example of Georgia’s drive to capitalize on its tourism potential, boosting the economy of an ex-Soviet nation where roughly one person in five lives in poverty. The government has attracted top foreign investors, such as U.S. real estate magnate Donald Trump, to build hotels and develop and renovate tourist sites. And it has aggressively marketed Georgia as a tourism hot spot.

The project capitalizes not only on Georgia’s geographical riches — the Black Sea, the soaring Caucasus mountains and its ancient cities — but also on the very essence of the Georgian culture: hospitality itself. Here, refusing to come into one’s home and sitting down at a food-laden table can result in deep personal insult, while declining to toast with traditional Georgian wine can prompt reprimands like, “Don’t you respect me?”

“Unfortunately, Georgia is not a country that has a lot of natural resources, there is no oil, no gas and so what helps the country grow economically is intellect and tourism,” Batumi mayor Robert Chkhaidze told The Associated Press in an interview. “For us, a guest is something precious. For a Georgian, each guest is like God.”

Since coming to power in the peaceful 2003 Rose Revolution, the pro-Western President Mikhail Saakashvili has turned the tourism industry into a key sector of the Georgian economy, now comprising 7.1 percent of the Georgian GDP, compared to 3.4 percent in 2004. In 2001, Georgia’s Black Sea towns, the ski resorts of Gudauri and Bakuriani, the winemaking region of Kakheti and other tourist attractions have drawn 2.8 million or nearly 8 times more than in 2004 and tourism revenues have jumped from $176 million to $938 million, according to tourism officials.

It remains to be seen whether Saakashvili’s rival, billionaire Bidzina Ivanishvili, who appears poised to become the next prime minister, will continue developing the tourism sector or focus on something else.

But the effects of the tourism campaign are plain to see in the transformation of this resort, dubbed the “Batumi Miracle.”

Today, the center of Batumi could easily be mistaken for a western European seaside town with neat cobblestone streets, graced by vine grapes descending onto the pavement, bustling cafes and noisy fountains. The city skyline is dotted by internationally renowned hotels like the Sheraton and the Hilton; scores of others including a 47-story Trump Tower are being built. At night, Batumi is bright with lights and even the pineapple-shaped palm trees, which line the embankment, are illuminated.

Batumi now boasts its own piazza, dominated by a soaring clock-tower, which is modeled after central city squares in Italian cities. Work is also under way to erect a fountain flowing with chacha, Georgian grape vodka, available for free, though in small amounts. There are scores of fashion boutiques and even a plastic surgery clinic.

The new hotels have created several thousand jobs for the graduates of a recently opened tourism college, a heartening change in a country where the unemployment rate is 16 percent. Restaurants and cafes have sprung up like mushrooms, offering the traditional Georgian dish called of Khachapuri, crusty boat-shaped bread in which an egg yolk floats in melted cheese and butter.

And while some skeptics say that the official tourism figures may be inflated, there is no doubt that tourism is booming, with beaches and restaurants busy with visitors. Most tourists come from other ex-Soviet nations like Russia, Ukraine, Belarus, Armenia and Azerbaijan, but English, French and other languages are also heard on the streets.

Oksana Dovrenova, 40, came to Batumi with her daughter Damira Rakhmanova, 15, from the Central Asian nation of Kazakhstan. It was their first time at the sea and they were pleasantly surprised to discover that sea water is indeed salty.

“The people are very friendly, very welcoming, they are always happy to see you. Good job,” Dovrenova said, as she sunbathed at the pebble stone beach.

Shi Tang, 29, from China who works as a sales manager at a radio station in nearby Turkey, said he will return to Batumi, which he called a “European city,” with his friends.

“This is a good place: good sea, good beach and there are so many churches,” Shi said.

Locals call Batumi “the city of love” and authorities have erected numerous monuments to make the point — like the figure of a man kneeling down before a woman, offering her a red heart. They’ve even opened a round-the-clock marriage registry, where anyone can tie the knot day and night.

“A lot of families have been created after the tourist season in Batumi,” Chkhaidze, the mayor, said with a smile.

But a lot remains to be done. Step a few blocks away from the city center, and you may stumble into a pothole, see crumbling buildings and underwear flapping in the wind on balconies. Locals complain that water shortages still persist in residential areas and the average monthly salary in the city is just $300.

“People are still struggling, but the city is getting better and better,” said Marina Soselia, a 57-year-old doctor in Batumi.

Despite the difficulties, officials say, tourists are sure to get a warm welcome in Georgia.

One recent afternoon, a taxi driver pulled up to entrance of the Batumi and told his passengers, a young couple, that the next time they come here, “I will show you such places, that you wouldn’t want to leave.” The couple smiled with gratitude, but a colleague of the driver who stood nearby admonished him, “Why didn’t you show them these places this time around? If you had, they wouldn’t be leaving now!”

Has the Pandemic Killed the Freebie Trip for Travel Influencers?