Internet ignorance is bliss. Public Wi-Fi use has jumped 240 percent in the past year, but privacy fears aren’t strong enough to stop users from sharing credit card numbers and work files on open servers.

Despite the fear of identity theft and threats from computer viruses, the use of public wireless Internet access has jumped 240 percent in the last 12 months, a new survey has found.

The top log-in sites were coffee shops and restaurants (75 percent), hotels (54 percent) and airports (38 percent), according to an online survey of 377 people by the nonprofit Identity Theft Resource Center in partnership with Private WiFi, a firm that develops online protection software. 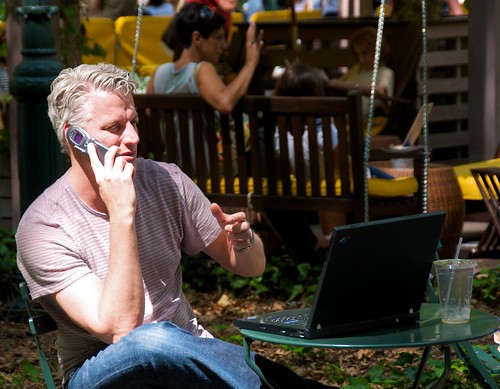 Cafes and restaurants are the top log-in sites. Photo by Ed Yourdon.

The survey’s authors suggest users of public Wi-Fi log on with a virtual private network, or VPN, to protect their data. But 44 percent of those surveyed said they didn’t know there was a way to protect themselves while using public Wi-Fi.