As I walked out of a noticeably dirty Hyatt hotel while on a book tour in San Francisco last week, I was startled by a major labor event with a well-executed picket line and loud, disciplined chanting. It became clear that the housekeeping staff and their union were asking customers to boycott Hyatt over a dispute of which I had been unaware. 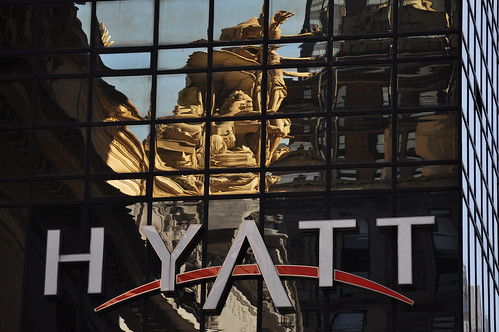 Hyatt responded to the union’s claim by pointing out that half of its employees stay at the company for 10+ years. Photo by Ludovic Bertron.

I received a tip to the story from Julia Wong of Unite Here, a coalition of union members in the hospitality industry, which asserts that Hyatt commonly exploits its workers. At first, housekeepers were calling for boycotts of individual Hyatt properties. But when Hyatt refused to address some of the concerns raised – such as health and safety, when the hotel chain led the opposition to a California bill that would have required hotels to use fitted sheets in order to ease the physical burden on cleaners – the effort ramped up to a global boycott.

In July 2012, Unite Here and other groups, including the National Football Players’ Association – whose representatives said that many players had been raised by hardworking women like the housekeepers who had joined the campaign – launched the escalated boycott, Hyatt Hurts. The coalition already includes some serious players in the feminist and leftwing activist worlds like the National Organization of Women (NOW), Moveon.org and the National Gay and Lesbian Task Force.

Hyatt has been awarded the dubious title of “the Worst Hospitality Employer in America” by the Hyatt Hurts website. Rather movingly, as the movement spread, workers in Hyatts in India, the UK, Israel and the Phillipines went on strike. This is a historic effort, because as globalization extends employers’ power globally, it also strengthens the global counter-protest, or global boycott, by uniting workers across the world to organize successfully from the ground upwards.

In interviews with the housekeepers, the issue of these women often being treated as if they are “invisible” came up again and again, as did the quantity of extremely hard work, sometimes injurious, that is expected of the mostly female, and mostly non-white, workers. As they pointed out, hotel guests rarely think about this, simply expecting vacuumed floors and dusted surfaces. But cleaning women and men typically perform heavy labor very quickly for a big chain such as Hyatt. In May, the federal authority, the Occupational Safety and Health Administration (OSHA), actually sent a letter to Hyatt management, warning executives about the health risks of driving their cleaning people so ruthlessly (a letter that is considered a first in the industry).

The Hyatt staff whom I interviewed describe the rapid pace of cleaning room after room, including the hard physical work like scrubbing bathrooms on one’s hands and knees and lifting heavy mattresses. These and other strenuous moves increase the likelihood of back and knee injuries given the expected high room turnover.

Jacob Tomsky, a desk clerk for a luxury hotel who has written a tell-all account of working in the hospitality industry, Heads in Beds: A Reckless Memoir of Hotels, Hustles and So-Called Hospitality, has great sympathy for housekeepers’ work conditions:

“Hyatt provides industry-leading wage and benefits packages, maintains an outstanding workplace safety record, and is a recognized leader in promoting a diverse workforce … It is because of our commitment to our associates that average tenure of our housekeepers at our North American properties is more than 12 years, with approximately half of our nearly 40,000 associates having worked with us for more than 10 years.

“Housekeeping can be a physical and difficult job. Contrary to Unite Here’s assertions, our associates have the tools, resources and training they need to do great work.”

Patrick also said that Hyatt’s workplace safety record “has been validated” by the OSHA, and counter-claimed that OSHA investigations had been instigated by Unite Here “as part of its ongoing campaign to pressure Hyatt to impose union membership on employees”.

A second issue raised by Hyatt Hurts is that Hyatt has led the industry in union-busting and exploitative temp-work outsourcing. A federal agency has issued a complaint against two Hyatts in San Francisco for violating the law by implementing “E-Verify” – a practice that immigrant rights advocates say is riddled with errors and can be used by employers to intimidate immigrant workers.

“More than nine out of ten workers in US Hyatt hotels are Hyatt employees. On an as-needed basis, and like virtually all hotel management companies, Hyatt uses staffing companies to supplement certain functions at our hotels so we can respond effectively to fluctuations in business levels and can operate efficiently.”

In San Francisco, I was appalled at the response a representative for Hyatt’s management when I asked her to explain Hyatt’s position on the striking workers.

“Those people don’t even work here,” she said through clenched lips. Which misses the point: of course, they don’t work there – they are union brothers and sisters of those who do work there. That is what a union does, that is how it works: solidarity.

What will be the outcome of the global boycott? Can these workers win?

The odds are daunting: housekeeper staff are at the very bottom of the social hierarchy in the hospitality industry – the hidden hands that make travel comfortable and clean. They lack money, representation and clout. And as Hyatt continues to contract out temp work systematically, the chain is probably betting that even more desperate workers will quietly take their places.

But what was obvious from talking to the workers outside the Hyatt Embarcadero – obvious in a union-busting age during a presidential election where one candidate is committed to gutting labor – is the conviction that it is “the union makes [them] strong”. Thousands of “invisible” women and men uniting around the world may be able to do what one woman or man kneeling alone, scrubbing a bathroom floor can never accomplish.

I, for one, was persuaded that I no longer wished to spend another night, or one more tourism dollar, in a Hyatt hotel until a group like Unite Here can give the chain a clean bill of health.

Thank you for signing up
Tags: hyatt, labor

Moving Beyond Demographics: Data Drives the Future of Travel Advertising