Skift Take
Vijay Mallya must be feeling hopeful after talks of foreign airlines looking to invest in his bankrupt airline began, but it’ll be a miracle for the airline to get the $600 million it desperately needs.
— Samantha Shankman
Share
Tweet
Share
Post
Send

Billionaire Vijay Mallya asked lenders for more time to recapitalize Kingfisher Airlines Ltd., the carrier that has defaulted on loan payments and cut flights after five years of losses, according to two bankers familiar with the matter.

Mallya, the Indian airline’s chairman, also sought additional working capital loans, said the bankers, who attended a meeting with the executive and declined to be named because the talks were private. Mallya reiterated that the carrier is in talks with foreign airlines to sell a stake, they said. 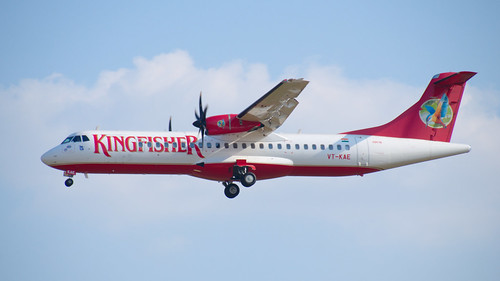 Mallya has asked lenders for more time to recapitalize the ailing airline. Photo by Tahir Hashmi.

Kingfisher is also talking to local investors for funds, Mallya said yesterday. The airline needs a capital infusion of $600 million in the next two months, industry consultant CAPA Centre for Aviation said in August.

The carrier was separately asked by India’s National Stock Exchange to submit details of the stake sale plan, according to a statement published on the exchange website.

Kingfisher, which has been seeking funds since at least November, has cut two-thirds of services, grounded planes and halted international flights as it struggles with an 86 billion- rupee ($1.6 billion) debt pile.

The Bangalore-based company’s founders have contributed 11.5 billion rupees since April 1, Mallya told shareholders at the company’s annual meeting yesterday. The airline is operating 15 planes, down from 66 in the year ended March 31, 2011.