Workers knew it was coming, but that doesn't make it any easier to swallow that 15 percent of American's workforce in Miami and Fort Lauderdale will lose jobs. The heaviest cuts set for service clerks and crew chiefs.

Nearly 10 months after one of Miami’s largest private employers filed for bankruptcy protection, South Florida finally knows what to expect from a restructured American Airlines.

The picture for the airline’s 9,000 employees in the region is glum: more than 1,400 jobs lost, the vast majority of them at Miami International Airport. Most of the jobs will be cut shortly before Christmas. 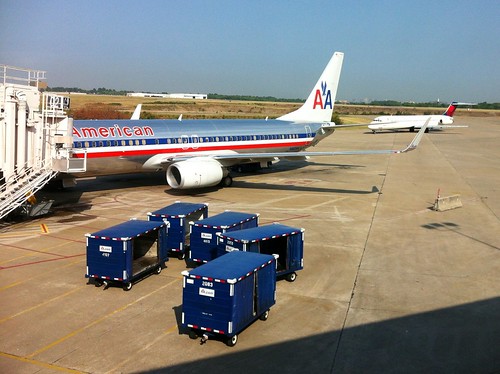 American Airlines is one of the Miami’s largest private employers. Photo by Grant Wickes.

The bulk of the jobs lost — 668 — will be fleet service clerks and crew chiefs at MIA, followed by 323 mechanics, 174 plant maintenance workers and 102 airport agents.

The details came in a letter to the State of Florida from Michael Waldron, American Airlines’ managing director of diversity strategies and talent development.

“Regrettably, reducing our costs requires that we must make a number of tough decisions,” he wrote. “Several of these very difficult decisions involved modifying work rules so as to allow American Airlines to outsource certain work across the American Airlines system, which will result in a reduction in force.”

Miami executives with the airline could not immediately be reached. In the past, American has said it would try to help employees whose jobs are outsourced find new employment with contractors.

Part of the airline’s overall strategy for success, post-bankruptcy, is to increase traffic at key hubs by 20 percent over the next five years. Miami, with its profitable Latin American routes, critically important to American.