Will the Euro crisis lead Catalonia to declare itself Europe’s newest nation? Skift Take
It’s unlikely Catalonia will ever secede from Spain, although one benefit would be the rush of tourists looking to visit the world’s newest country and sweet marketing materials the come from such a title.
— Samantha Shankman
Share
Tweet
Share
Post
Send

September 11 always brings Barcelonans into the streets to dance the sardana, sing for their enemies’ blood in the anthem Els Segaders, and chant political slogans in celebration of their national holiday, the Diada de Catalunya. But this year, a new intensity colored the Catalans’ nationalist fervor. The independence movement’s flag bearing a white star against a blue triangle outnumbered the region’s official plain yellow-and-red striped standard. A pro-independence march, which in the past has never drawn more than 50,000 people, pulled in a crowd estimated by city police at 1.5 million. And every newspaper in the city carried the results of a poll released this week that reveals a once-unimaginable transformation: Half the population of Catalonia supports secession from Spain. 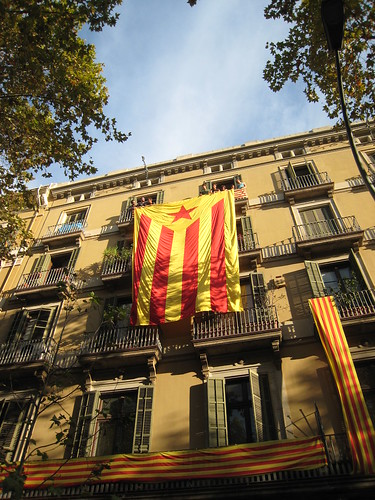 The economic crisis has also increased pro-independence sentiment in less concrete ways. Historian Enric Ucelay-Da Cal, who specializes in Catalan nationalism, sees the growth in secessionism as a reactionary response to the erosion of many of Catalonia’s traditionally distinguishing features.

“There’s terrible pressure on both Spain and Catalonia right now, and the frustration is enormous,” says professor Guibernau. “Secession was always unthinkable in Catalonia. But  it’s precisely at moments like this that the unthinkable can occur.”