Skift Take
Germany’s image as an efficient place for business and travel is in conflict with the reality of labor strikes at Lufthansa and unfinished airports in Berlin.
— Jason Clampet
Share
Tweet
Share
Post
Send

The union representing striking cabin crew at Lufthansa said it would resume talks on Friday afternoon with the airline in a bitter row over pay and conditions that led to a 24-hour strike on Friday, the biggest stoppage to date.

Speaking to protesters through a megaphone at Frankfurt’s Terminal 1, UFO head Nicoley Baublies said he had telephoned Lufthansa to try to end what he described as “trench warfare.”

Friday’s Germany-wide stoppage was the third strike in eight days by cabin crew, which so far have resulted in hundreds of cancelled flights and cost Lufthansa over 10 million euros ($12.6 million).

Lufthansa is resisting UFO’s demands for 5 percent pay increases and guarantees against outsourcing as it tries to slash costs in a plan to improve annual earnings by 1.5 billion euros by 2014.

“This dancing around must come to an end at some point, that’s why I called up Lufthansa,” Baublies said. 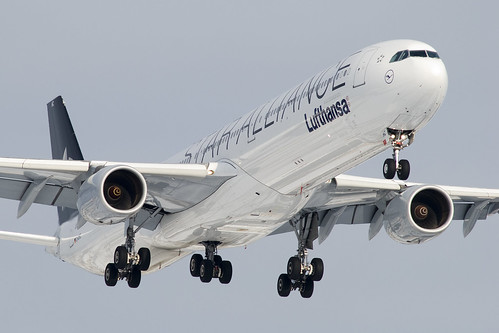 A Lufthansa plane in Toronto. Photo by BriYYZ.

He said the union was planning no further strikes for the time being but was prepared to resume industrial action should Lufthansa management not move beyond “tactical game playing”.

Germany’s labor relations are usually more harmonious than in other countries such as France and Spain, but after years of enduring low wage growth, employees are fighting back.

In May, Germany’s largest industrial union agreed to a 4.3 percent pay rise for 3.6 million car and engineering industry workers, their biggest pay rise since 1992.

In Germany’s airline industry over the last year, there have been threatened walkouts by air traffic controllers, and a strike by airfield workers in February at Frankfurt airport in rows over pay.

Lufthansa had repeatedly called on the union to return to the negotiating table.

“This invitation is still open and we now hope for constructive talks,” a spokesman earlier told a German TV station.

The airline has refused to improve on its offer of 3.6 percent more pay in exchange for longer hours, and has also said it does not see much point to calling in a mediator, which under German law would bring an end to the strikes.

Talks between the two sides broke down last week after 13 months of negotiations. The union went on strike for eight hours at Frankfurt airport last Friday before widening the stoppage to Munich and Berlin on Tuesday this week.

Lufthansa said it hoped to operate about half its daily schedule of around 1,800 flights on Friday, more than previously forecast.

After the 24-hour, Germany-wide strike was announced earlier this week, the airline said it would probably cancel around two thirds of flights.

Unlike previous strikes, where the union gave only six hours’ notice of the location and duration, Lufthansa has had time to prepare for the latest action.