Resentful locals and moneyed visitors is never a good mix for long-term tourism success, but it's great for capturing snapshots of the current economic state.

On a jetty alongside the town beach a loud phone call disturbs the peace of a handful of Spetses residents lying in the sun before taking their daily swim – one free pleasure that is still available to all. A rich weekender from Athens booms ostentatiously into his mobile, directing a man behind the wheel of a sizeable speedboat. “Just ignore the line of buoys,” he says, “and steer straight over to me so we can talk.” The instruction provokes a furious reaction from locals, who yell out angrily that boats are never allowed to come so close to the swimmers. A nasty row flares up – a sign of growing social tensions on an island where poor locals live cheek-by-jowl with the holidaymaking rich.

Antonis Samaras, the Greek prime minister, spent last week pleading with European leaders for more time to implement the severe austerity programme that is, ultimately, the condition for Greece remaining in the euro. Back home, and on islands such as Spetses, those well-off Greeks who remain financially cushioned from the effects of the deepening crisis, and from the fresh austerity measures due to be imposed next month, are the targets of growing fury. 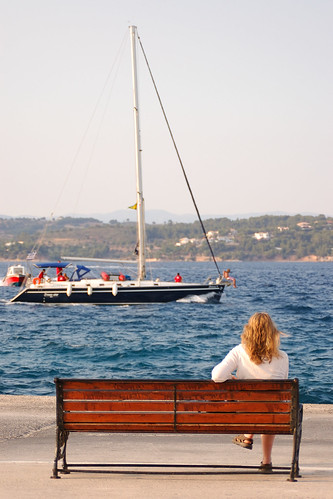 The waterfront of Spetses, Greece. Photo by Rosino.

The Saronic isle, with its pretty horse buggies and flowery villas, has been chosen as the location for a new Greek tourism advert, designed to reassure international visitors that the beaches and the bobbing fishing boats are still waiting for them, despite the economic meltdown. Yet the place is also a microcosm of the country’s troubles: 10 square miles that encompass unimaginably big gaps in income.

While Athenians can enjoy browsing in the expensive deli that has replaced the souvlaki outlet in the square, the majority of Spetsiots can no longer afford to eat in local restaurants. The price of food in supermarkets and shops has soared.

“It is a theatre now,” says Kostas, who is stockpiling food against a coming national emergency and has hunting guns positioned around his home. But as the son of an old Spetses family, he knows that appearances must be kept up to attract wealthy guests, no matter how difficult life becomes for residents. Leisure and pleasure are Spetses’ only lifeline in the crisis, but might also put islanders in peril. Kostas is aware that communities on the mainland are envious of the apparently lavish lifestyle on the isle. There are fears that if the Greek economy really does melt down, Spetses could be targeted as a symbol of the feckless rich even as most of its year-round inhabitants struggle to get by.

The glitzy reputation is not new. By custom elderly women, wrapped in black scarves and long dresses, would gather in the afternoon to share slices of watermelon as they sat in the shade. A scene from old Greece, sure enough, but this was never really a rustic island – not the kind with donkeys and quiet tavernas with broken chairs. Proximity to Athens ensured that it became a tycoons’ playground as soon as international shipping began to make billionaires in the 1950s.

And so it has continued. In 1962 Stavros Niarchos, second only to Aristotle Onassis in the magnate stakes, bought the tiny neighbouring private island of Spetsopoula where Charles and Diana later spent part of their honeymoon; and in the early 1980s when Duran Duran’s Simon Le Bon wanted to celebrate a birthday, he did so under the flashing lights of a disco in Spetses’ glamorous Old Harbour.

Even as Greece staggers towards a possible exit from the euro, the glamorous facade is intact. Far from looking down-at-heel, or being daubed with angry graffiti, Spetses has never looked more affluent. The failed economy is the fearful topic of conversation everywhere, but the place is gleaming. Smart decking has replaced crumbling concrete around the cobbled maritime mosaics of the Dapia, the island’s neat port, and alongside a new crop of sophisticated bars and clothes shops, two sparkling rival frozen yoghurt parlours vie for trade with an equally clinical-looking ice cream cafe.

The imposing Edwardian Poseidonian Grand Hotel – so disliked by John Fowles when he set his 1966 novel The Magus here – is more stately than ever. But its linen-covered terrace tables are reserved for the owners of a succession of vast, state-of-the-art yachts moored at the marina on the promenade.

Perhaps most tellingly of all, no restaurant here, no matter how traditional, seems to serve retsina, the national wine. “Tastes have changed,” say the waiters. Moneyed Athenians have largely switched to the European-style Greek wines that have started winning admirers.

This opulence, tailored for the few, explains why little Spetses has come to be known as the Monaco of Greece. It is somewhere, along with a few other smart islands such as the neighbouring Hydra, where those Greeks who still have lots of money can spend it in splendid seclusion.

There are no private cars on the island and so the locals travel on mopeds or quadbikes. Visitors, on the other hand, take horse buggies, traditional wooden fishing boats, or water taxis that charge €18 to cross the bay to the Old Harbour, while those who are really flush can be heard landing on the island’s private helipads.

Middle-class European tourists tend to come to the wider Saronic Gulf for its safe sailing. Although the sea can be affected by the unpredictable meltemi wind, it is a haven for amateurs in search of day trips and weekend excursions. Trade is just about surviving, says Melody McKay Burton, who runs the Aegean Sailing School from nearby Aegina. People are booking much later, but still booking. Her work, she adds, brings her in touch with all nationalities and so has emphasised Greece’s key position at the meeting point of the Middle East and Europe. “We have had Palestinians and Israelis, Greeks and Turks, all on the same skippered boat before, and they all seem to get on and to be interested in each other.” Russians also now regularly hire out her yachts for lavish weekend parties.

Back in the 1980s and 1990s the island of Spetses flirted with cheap package tours, but British firms pulled out in the recession, leaving in their wake an adventurous group of British women who had fallen in love with the island, and with some of its men, and stayed to raise families. Fortunes have ebbed and flowed since then, as mass tourism beat a slow retreat from Spetses’ beaches. But behind the picture-postcard facade, the times have never been worse than now.

The island, once described by Fowles as “a place so beautiful, quiet and empty that it verged on the terrifying” is full of worried people. Memories of the atrocities inflicted on Greeks by Greeks at the end of the second world war, and recounted in The Magus, are still vivid for many. They may have been distorted in the retelling, but they remain powerful enough to create fear and suspicion. After all, people were lynched on the Dapia and shot outside the Poseidonian.

An old sense of vulnerability is returning to Spetses, behind the beach parasols and designer sunglasses.

The words on the island’s flag, which dates back nearly 200 years to the Greek war of independence, are “Freedom or Death”. They no longer seem such a quaint remnant from a swashbuckling past.