Going back in time along Sicily’s most pristine coastline

Untouched Mediterranean beaches are there to be found. Just step away from the resort areas and be prepared to walk a bit.

They had a feel for location, those Ancient Greeks. On the south-west coast of Sicily, the colony of Selinunte seems placed for effect, rising on a low cliff of sandy clay above a buff-coloured beach that stretches for miles on either side. The ground around the handsome Doric temple that dominates the seaward part of the site is covered in fennel, poppies, sea holly, gorse and the wild parsley (selinon in Greek) that almost certainly gave the settlement its name.

When the connoisseur and art collector Richard Payne Knight visited Selinunte in 1777, this was a desolate, wild and romantic place – we know as much because Payne Knight had two artists in his train, Jacob Philipp Hackert and Charles Gore, whose job it was to chart their patron’s travels, and several of their watercolours of Selinus, as it was then known, are now in the British Museum. 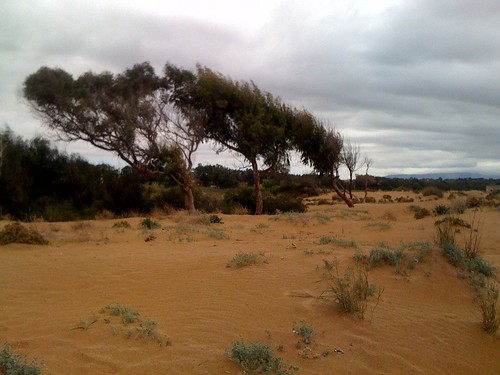 Corners of the site are still as sublimely bucolic today as in those sentimental scenes of long-horned cattle amid the ruins; but the seaward view has changed beyond recognition. For years, a combination of malaria and poverty kept development to a minimum along this pristine stretch of coastline. Today however, Marinella di Selinunte, once a scatter of fishermen’s shacks to the east of the temple mound, has become a sprawl of seaside houses and cheerful beach diners with names like Boomerang Bar and Baffo’s Castle.

However, continue east past this jerry-built resort and you get to one of Sicily’s best beaches, a two-mile-long stretch of golden sand that since 1984 has been part of the Foce del Belice nature reserve. Here, at last, is the unspoilt dunescape charted by those early Grand Tourists, and here, at last, is the peace and space to enjoy it.

The Foce del Belice is one of the last remaining stretches of substantially untouched Sicilian coastline, and it’s well maintained, with boardwalk paths leading through the pinewoods and across the dunes from the SP56 road that runs parallel to the coast; alternatively, you can simply walk along the beach from La Pineta restaurant at the western edge of the reserve, or from the smaller resort of Porto Palo to the east.

Le Solette, a wide swathe of sand just to the west of Porto Palo, is as good a place as any to lay out your beach towel, but there are also some lovely secluded coves further to the west, such as Capparrina di Mare, with its sea-turtle colony and scatter of Chamaerops dwarf palms. Another charmed spot is the mouth of the Belice river, from which the reserve takes it name: it’s not unusual to see kingfishers along here. Agaves, sea daffodils and sea rocket sprout straight out of the sand in some stretches.

On the map, visitor attractions in this corner of Sicily look to be a little thin; but in fact, the surrounding area has plenty of under-advertised draws. A little inland and to the east, Menfi, rebuilt after 1968, is at the centre of one of the island’s great wine-growing areas, and the coastal town of Sciacca beyond has a glorious Baroque centro storico. The inhabitants seem to live outside all year round, indulging in the Sicilian pleasures of eating, drinking, strolling and chatting.

But my favourite trip in the area is to Cave di Cusa, 12 miles north of Selinunte. This was the quarry from which Selinunte’s masons hewed the stone that went into the town’s great temples. They were cut and dressed in situ, but many never made it to the coast: when the Carthaginians attacked Selinunte in 409BC, the site was abandoned. Great stone drums lie beneath lentisk and almond trees, in a long shallow gorge of a quarry that is a carpet of wild flowers in spring. It’s like Shelley’s Ozymandias – with buttercups and borage replacing the lone and level sands.

British Airways (0844 493 0787; ba.com) flies from Gatwick to Catania; Ryanair (ryanair.com) from Stansted to Palermo and easyJet (easyjet.com) from Gatwick to Palermo; not all flights are available out of season. Selinunte is 90 minutes’ drive from Palermo airport. A car is needed to get the most out of the area, but bus from Trapani airport to Menfi (autolineelumia.it) take you part of the way. For tailor-made trips, contact specialist Think Sicily (020 7377 8518; thinksicily.com).

THE BEST PLACES TO STAY

Opened by leading wine producer Planeta in 2009, this cool contemporary rural hotel looks down over vineyards to the sea. Each of the 14 chic rooms has its own private terrace, and the creative Sicilian restaurant is worth a trip in its own right (0925 195 5460; planetaestate.it; doubles from €160/£126).

These two villas stand just above the beach in one of the most protected and secluded parts of the riserva. Both are luxurious Crusoe hideouts, built in the Sixties by an eco-friendly Palermo architect (020 7377 8518; thinksicily.com; weekly rental from €2,370/£1,874 for two).

It’s just a simple beach bar, but the seafood antipasto spread that they serve up here is one of the best on the south coast, and so abundant that you may not even make it to the pasta course. Try to save some room for the lemon granita. Around £16 without wine (Piazza delle Metope; 335 656 3751; closed Wednesday lunch).

This unassuming beachside restaurant is one of Giorgio Locatelli’s favourite places in Sicily. Follow Giorgio’s lead and order that Sicilian classic, sarde a beccafico, a sweet-and-sour baked sardine dish. Around £22 per head (Via Friuli Venezia Giulia 9; 0925 78381; open daily).

A cute gourmet trattoria in a Sciacca back lane, the Hostaria prides itself on making good things out of the best and freshest local ingredients – as in their excellent tagliolini with John Dory roe and wild fennel. Around £28 per head (Vicolo Sammaritano 10; 0925 23071; hostariadelvicolo.it; closed Monday).