Now the Colosseum of Rome is leaning, repairs shutdown a possibility

What if the Colosseum has to be shut down for repairs, the way Leaning Tower of Pisa was closed for more than a decade all through the 1990s? What losses could it inflict on Italian tourism?

The Colosseum of Rome could be in need of the kind of structural intervention that saved the Leaning Tower of Pisa after officials found that its south side is 15 inches lower than the north.

Authorities became aware of the tilt in the 2,000-year-old amphitheatre about a year ago and have been monitoring it closely for the past couple of months.

They believe that “dynamic vibrations” caused by Rome’s heavy traffic, may be responsible for the drop on the south side next to one of Rome’s busiest thoroughfares. 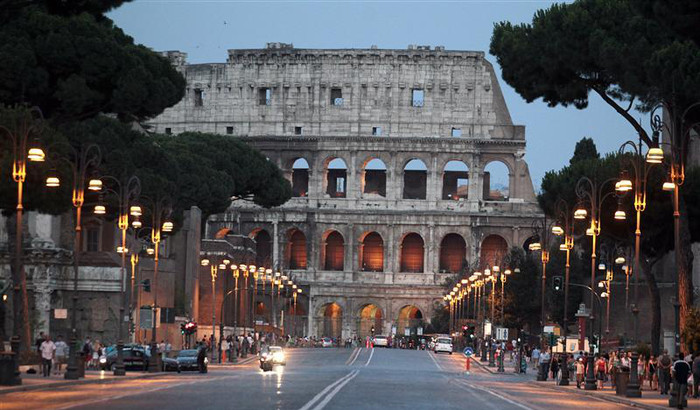 An empty Fori Imperiali street in front of ancient Colosseum is seen in Rome during the Euro 2012 final soccer match between Italy and Spain July 1, 2012. Photo by REUTERS/Stefano Rellandini

Now experts from Rome’s Sapienza University and the Institute of Environmental Geology and Geoengineering (IGAG) have been asked to conduct an urgent scientific study to determine the cause.

Professor Giorgio Monti, from Sapienza’s department of structural engineering, said he fears there may be a crack in the base of the monument.

“The concrete foundation on which the Colosseum is built is an oval-shaped ‘doughnut’ which is 13 metres [42 feet] thick,” ProfMonti said. “There could be a stress fracture inside it.”

This may explain why the north and the south side of the monument are no longer in horizontal alignment.

Rossella Rea, the director of the Colossum and an archaeologist with nearly 30 years’ experience, said: “If our doubts are confirmed, we are dealing with two structurally different monuments and at that point it would be necessary to reunite them.”

She has now raised the prospect that the same sort of restoration work that saved the Leaning Tower of Pisa more than a decade ago will be needed.

The decorative 12th century tower was closed to the public for 10 years after concerns about its stability and reopened in 2001 after successful reconstruction efforts to straighten its incline and strengthen its foundations.

“Like the Leaning Tower of Pisa, we need to evaluate the best approach but any discussion now is premature,” Ms Rea said.

The need for a more comprehensive restoration of the

, which was built by Emperor Vespasian in 72AD, has been evident in the last couple of years as chunks of masonry and stone have fallen from the arena.A controversial £21 million proposal by wealthy entrepreneur, Diego Della Valle, head of the Tod’s shoe empire, to restore the monument’s façade and underground area has also been bogged down by bureaucratic infighting.

The two-year restoration was due to begin in March and the proposal will be presented to Italy’s powerful culture ministry tomorrow.