This German-speaking autonomous region of Italy has fended for itself for years and now a confluence of smart spending, pristine scenery, and dissatisfaction with Italy's economy has it considering going solo. 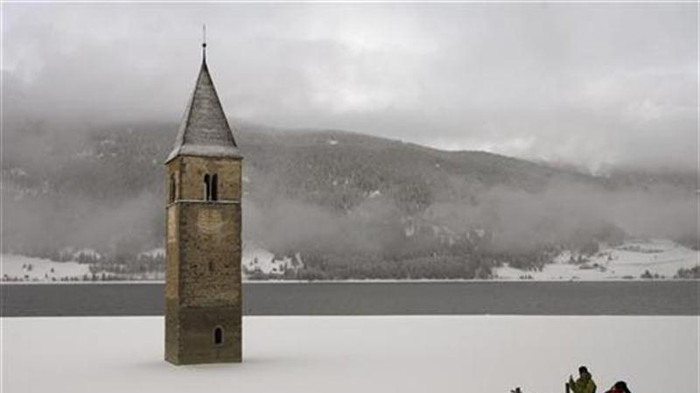 People take pictures in front of the former church tower of the Village of Graun in South Tyrol which sticks out of the partially frozen Lake Reschen reservoir in Northern Italy November 29, 2008. REUTERS/Arnd Wiegmann

Pure spring water, solitary Alpine paths, the discreet hospitality of mountain people: this is the sober recipe with which the remote South Tyrolean hamlet of Sulden has won over German Chancellor Angela Merkel for seven summers in a row.

Merkel, a keen hiker who shuns exotic holiday destinations, was introduced to this village, population 350, at the foot of the majestic Ortles glacier by Italy’s best-known living climber, Reinhold Messner, over dinner in Berlin in 2004.

“She was planning to go to Seiser Alm, another resort in the Dolomites. But then Messner’s wife Sabine said: why don’t you come to Sulden? And Merkel replied: I have never heard of it,” said Messner’s friend and expedition companion Paul Hanny.

Six million tourists made their way last year to this pristine, mostly German-speaking Italian region wedged between the Swiss and Austrian borders, seeking refuge from the stresses of Europe’s deep economic crisis and keeping South Tyrol’s economy afloat while the rest of Italy sank into recession.

Like elsewhere in South Tyrol, Sulden, nicknamed ‘Merkel’s Valley’ after her frequent visits, relies on German tourism to make up for the shrinking presence of cash-strapped Italians.

The region’s inhabitants enjoy a much closer relationship with Europe’s paymaster Germany than does the rest of euro-zone struggler Italy.

Walking past the well-kept chalets, cafes and hotels it is difficult to believe that Sulden, which also enjoyed a three-day visit by pop star Michael Jackson in 2001, was once an impoverished village where even bread was a delicacy. It lacked a proper paved road until the late 1960s.

“The crisis has not hit us as badly as elsewhere in Italy. This is because 70 percent of our tourists are Germans,” said Tschenett Hartwig, mayor of the town of Stilfs, to which Sulden belongs.

The rise from rags to riches of Sulden is symbolic of the ascent of South Tyrol, an autonomous Italian province that is home to half a million people and is Italy’s wealthiest with an average yearly income of around 35,000 euros per head.

The region, once part of the Austro-Hungarian Empire, was annexed to Italy after World War I and fascist dictator Benito Mussolini tried to suppress the German language in the 1920s and 1930s, banning even the use of German first names.

This forced ‘Italianisation’ sparked opposition to rule from Rome that erupted in political violence in the 1960s and came to an end only after the region was granted autonomy in 1972. The autonomy statute, updated over the years, allows South Tyrol to retain and use locally the bulk of its tax revenues.

Once the political conflict ended, South Tyrol started to prosper, turning itself in less than 40 years from a struggling mountain region to a top European skiing and travel destination. In 2009, parts of the Dolomites mountain range that crosses South Tyrol were declared a UNESCO World Heritage Site.

South Tyrol also benefits from being the main gateway to Austria and subsequently Germany through the Brenner Pass.

“I am very surprised at the resilience of the economy here,” said German-born Peter Schedl, who gave up a high-flying job at Deutsche Bank in 2009 to become the Chief Executive of the Suedtiroler Sparkasse, the biggest local bank.

“There is of course an impact from the crisis, for instance in the building sector, which has slowed down. But tourism has kept up very well and there is no recession to be spoken of.”

While the Italian economy is forecast to contract by as much as 2 percent this year, South Tyrol is seen growing by up to 0.5 percent in 2012, according to local research institute IRE.

Unemployment, which in Italy is now at 10 percent, is here hovering around 3 percent. This is higher than the 2 percent seen in the run up to the start of the crisis in 2008, but still at levels that economists count as full employment.

South Tyrol’s jobless levels are the lowest in Europe after the Dutch region of Zeeland and in line with prosperous Bavaria. Youth unemployment, which in Italy reaches 35 percent and in Spain 50 percent, is here only around 6-8 percent.

Unlike the rest of Italy, there is also no sign of the credit crunch that is choking off small enterprises elsewhere.

Local entrepreneurs, who have privileged access to the German-speaking world, tend to embrace Merkel’s call for radical structural reforms as a way to fix the fundamental imbalances within the euro zone.

“Merkel’s call for austerity is not anti-European. She says: Germany is ready to do more, providing that other countries – including Italy – do their homework,” said Stefan Pan, who heads the local business association Assoimprenditori.

Calls to leave the euro from maverick comedian Beppe Grillo’s rising Five Star Movement and others have won little support in this border region.

“The population has been strongly in favor of the euro and they are still convinced of its necessity, even though they have been a bit disappointed by a perceived rise in retail prices,” said Michl Ebner, head of the regional Chamber of Commerce.

The secret of South Tyrol’s success, locals say, has been the careful use of the tax revenues the Italian state returns to the province under the autonomy statute.

South Tyrol shares only 10 percent of tax returns with Rome and keeps the remaining 90 percent to develop its own hospitals, schools, public services and to subsidize the mountain farms that dot its Alpine landscape.

And compared to the rest of Italy, crime is low.

The benefits of autonomy contribute to this prosperity, said provincial governor Luis Durnwalder.

“In the 1960s living here was like Uganda,” said Durnwalder, who grew up on a mountain farm with “11 children and seven cows” and only got to study because he said he wanted to be a priest.

“Young people have grown up with the benefits of autonomy. They do not realize that we have been poor, they have not lived through the tensions of the 1960s-70s,” said Durnwalder, a member of the moderate SVP (South Tyrol People’s Party).

Yet, locals fear their autonomy could be diluted by technocrat Prime Minister Mario Monti’s austerity drive.

While they broadly back Monti’s reforms, they are up in arms against mandatory spending cuts by public administrations, which could breach South Tyrol’s autonomy statute.

Local hard-rightist parties are seizing this opportunity to attack the government and stoke anti-Italian sentiments.

The SuedTiroler Freiheit (South Tyrol Freedom) party is openly calling for a referendum on whether to leave Italy.

The party, led by separatist leader Eva Klotz who is popular in the German-speaking mountain valleys, has seen its membership soar since the beginning of the economic crisis in 2008.

Should Durnwalder, a charismatic 70-year-old, decide not to run at next year’s provincial election, the moderate SVP could lose its control of the province to the advantage of hard-right parties, which already have nearly a quarter of the seats in the provincial parliament.

“In the 1960s and 1970s there was a strong opposition against Italy’s central government. Then, thanks to the autonomy statute, the situation has much improved,” said Stilfs mayor Hartwig, who has taught at the local middle-school for 21 years.

“Now the hard right is gaining support among the young generation. Some do not see their future in Italy.”