Serial airline entrepreneur David Neeleman's new venture Breeze Airways takes off next week. While it may not yet be the Amazon or Uber of airlines, Neeleman is confident in its prospects tapping some of American's pent-up travel demand.

David Neeleman was recently in Huntsville, Alabama, for family reasons. His mother-in-law had passed away. But while there he saw a growing, lively city with people who wanted to travel but, after all of the airline consolidation of the past decade, could not easily do so without a connection at a major airport like Atlanta.

So what does a serial airline entrepreneur do? Adds Huntsville to the list of initial destinations for his latest venture, Breeze Airways.

Breeze will take off from Tampa on May 27 with plans to initially serve 16 destinations, most east of the Mississippi River. The carrier is Neeleman’s fifth after Azul in Brazil, JetBlue Airways, WestJet in Canada, and Morris Air. If there is someone who could launch an all new airline during the worst crisis the industry has ever faced, it’s Neeleman.

“Obviously we’ve been through a tough year, [what] with Covid and the industry has been particularly hard hit,” Neeleman told Skift in an interview. “But thank goodness there’ve been so many improvements on the vaccine front and our knowledge of the disease. I think people are feeling more comfortable now to be able to travel. I think there’s a lot of pent-up demand.” 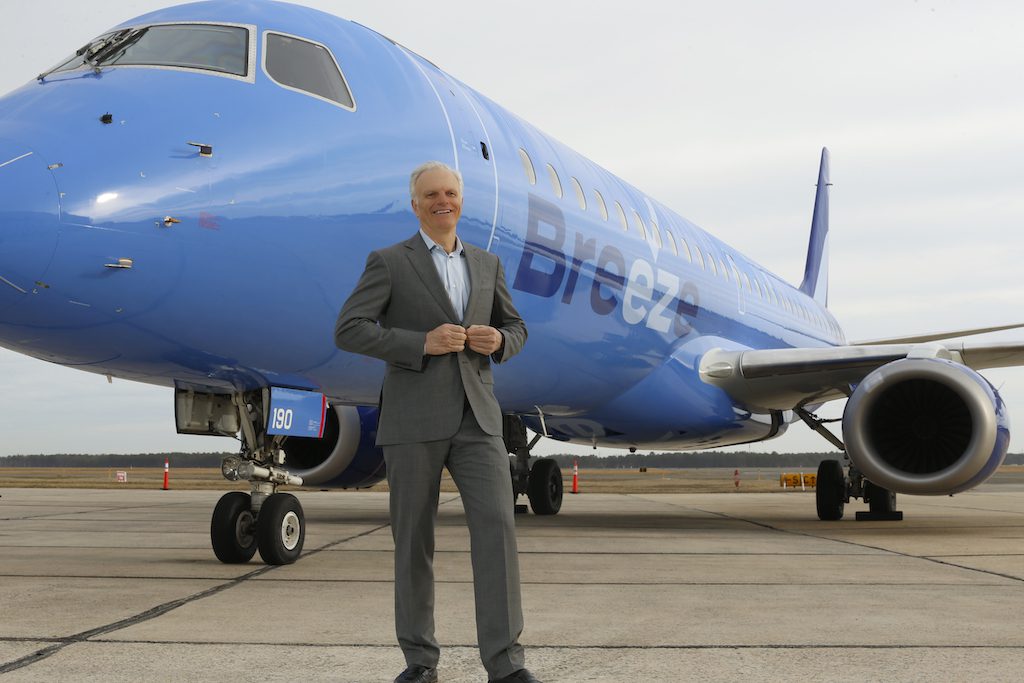 Breeze Airways founder David Neeleman in front of one of the airlines’ Embraer jets. (Cean Orrett/Cean One Studio)

That’s good for Breeze. The airline will begin flights just as the U.S. industry is bracing itself for what could be a strong summer for leisure travel. Many discounters plan to fly more this summer than they did in 2019, while major carriers like American Airlines and United Airlines see leisure bookings at or near levels last seen two years ago. Frontier Airlines executives even think the travel surge could last as long as 18 months.

That said, the Breeze’s launch has not been without hiccups. A controversial plan to hire college students as flight attendants fizzled earlier in May when the carrier did not receive enough applicants. And in April, Neeleman told Bloomberg that anyone who wore a mask outside while social distancing was a “moron.” Both generated negative headlines for Neeleman and his airline.

Every hiccup matters for a startup airline, a notoriously tough endeavor even in the best of times. There are far more failed attempts than successes. The last major startup that is still flying is JetBlue that launched in 2000. Since then, every startup has either failed — California Pacific Airlines, Skybus, a reincarnation of People Express to name a few — or been bought, like Virgin America.

Neeleman is not alone in thinking this is a good time to launch an airline. Former Allegiant Air and United executive Andrew Levy’s Avelo Airlines took to the skies from Burbank, Calif., in April. The carrier plans to open a second base in New Haven, Conn., later this year. And if two new airlines were not enough, Massachusetts-based Waltzing Matilda Aviation hopes to launch Connect Airways connecting major U.S. cities with Toronto before 2021 is out.

“Each of these airlines are well capitalized, run by industry veterans that have seen the entirety of multiple business cycles and understand that there are different models that can be used to survive and flourish,” said William Swelbar, chief industry analyst at advisors the Swelbar-Zhong Consultancy, referring to Avelo and Breeze. “I think the timing could not be better.”

The Amazon or Uber of Airlines

During its incubation, Neeleman touted Breeze as a “technology company that just happens to fly airplanes.” Speaking with Skift in 2018, he outlined a vision for the airline equivalent of Amazon or Uber, where a highly functional app would take care of most customer service needs.

Asked whether that vision has come to fruition, Neeleman said Breeze’s app is “the equivalent to anybody else’s.” Travelers will be able to book and change flights, check in, select seats and all of the other functions they can do on most other major airline apps today. They can also reserve rental cars, one of many added capabilities that are planned.

The app he described is about par for the course for the industry. In terms of functionality, it may be a step ahead of the one Avelo launched with that, at first glance, allows travelers to book and change flights, as well as check in for trips.

Breeze tickets are split into three buckets: bargain “Nice” fares that require an extra fee for checked bags, seat assignments and beverages; mid-range “Nicer” that include the Nice extras as well as extra-legroom seats; and, when it introduces its first Airbus A220 around year-end, a new business class dubbed “Nicest.”

Neeleman has a multi-functional vision for the Breeze app. Say a customer is looking at their reservation to Tampa, he wants the app to automatically ask if they want to add an Airbnb or a rental car to that trip. While hardly an out-of-the-box concept, few airlines have done this well. Some, like JetBlue Airways, have built websites that offer similar functionality but, as yet, do not offer it on their apps.

“I just wanted it to make it like ordering an Uber or ordering something on Amazon,” said Neeleman. “We can start layering things in, [like] ‘hey, we see you’re flying today. We’ve got an amazing filet mignon sandwich for $19. Do you want us to add it to your credit card and serve it to you hot on the airplane?’ You know, whatever.”

Breeze, like Neeleman’s past ventures, aims to tap an unserved niche in the U.S. travel sector. JetBlue brought a significant amount of domestic flying back to JFK after it had shrunk to primarily an international gateway in the late 1990s. And Breeze sees a similar opportunity in connecting small- and medium-sized cities — many of whom lost air service even before Covid-19 hit — with nonstop flights.

Breeze will connect three airports on day one: Charleston, S.C., Hartford and Tampa. The airline will add its remaining 13 cities over the next two months: Louisville on May 28; Tulsa on June 4; Norfolk on June 9; Northwest Arkansas and Oklahoma City on June 17; Akron/Canton, Ohio, on June 26; New Orleans and Pittsburgh on July 1; Columbus, Richmond and San Antonio on July 8; Huntsville on July 15; and Providence on July 22. Most flights touch either Charleston, New Orleans, Norfolk or Tampa. Breeze will initially serve 16 cities with flights beginning May 27. (Breeze)

Out of Breeze’s initial 40 routes, it only faces competition on 10 of them, according to Cirium schedule data.

Limited competition does not necessarily mean success. There are reasons why other airlines have either not succeeded on these routes or not seen a large enough opportunity to try.

Low trip costs are the answer, said Neeleman. By that he meant the total cost of operating a given flight — or “trip” — including everything from fuel, labor to the aircraft itself. Low trip expenses coupled with a smaller jet — Breeze is launching with 13 Embraer E-Jets that seat 108-118 passengers — allows the airline to go into these seemingly overlooked markets.

“We experienced the power of trip costs in Brazil, as we built out a network of 118 cities [at Azul] and it really works,” he said.

The strategy flies contrary to the larger-plane-is-better trend among U.S. budget carriers. Allegiant, Frontier and Spirit Airlines have all shifted toward larger jets that seat more than 150 passengers in their relentless drive to lower costs per seat mile, or unit costs. This strategy, while undoubtedly successful for these other carriers, has left a “big space in the middle” of the market for a startup like Breeze, said Neeleman.

Swelbar agreed that there are a lot of unserved markets with more than 50 daily passengers each way in the U.S. By his analysis, there are 885 such routes across the country today. In other words: plenty of opportunity for the likes of Avelo, Breeze and any other airline willing to expand onto these routes.

Airlines across the industry have opened new markets even as the crisis has shrunk their overall maps. For example, JetBlue has added more than 50 new nonstops since last summer, with executives saying many have met or exceeded expectations. But the airline also remains out of some key markets, including flights on business-focused routes between Boston and places like Baltimore/Washington, Rochester and Syracuse.

Breeze has no immediately plans to serve big cities like New York or Washington, D.C., said Neeleman. Serving New York would mean flying to either MacArthur Airport on Long Island to Stewart north of the city, neither of which “pencil” well in the airline’s initial financial analysis.

With the arrival of the first of 60 new A220s in October, Breeze plans to add routes longer than two-hours to its map. Neeleman did not specify any potential markets but said that, like the airline’s initial routes, they will most lack nonstop competition.

In addition, he declined to comment on reports that Breeze has ordered another 20 A220s for a total of 80 aircraft.

Breeze tickets are on sale from today. The airline launches on the Thursday before the symbolic start of summer in the U.S., Memorial Day weekend, giving it less than a very tight week to attract bookings for the historically busy travel period.

“My dream for Breeze is to serve a lot of communities that don’t have air service or don’t have nonstop service,” said Neeleman. “We’re just looking to create … another segment of the economy to help these communities.”