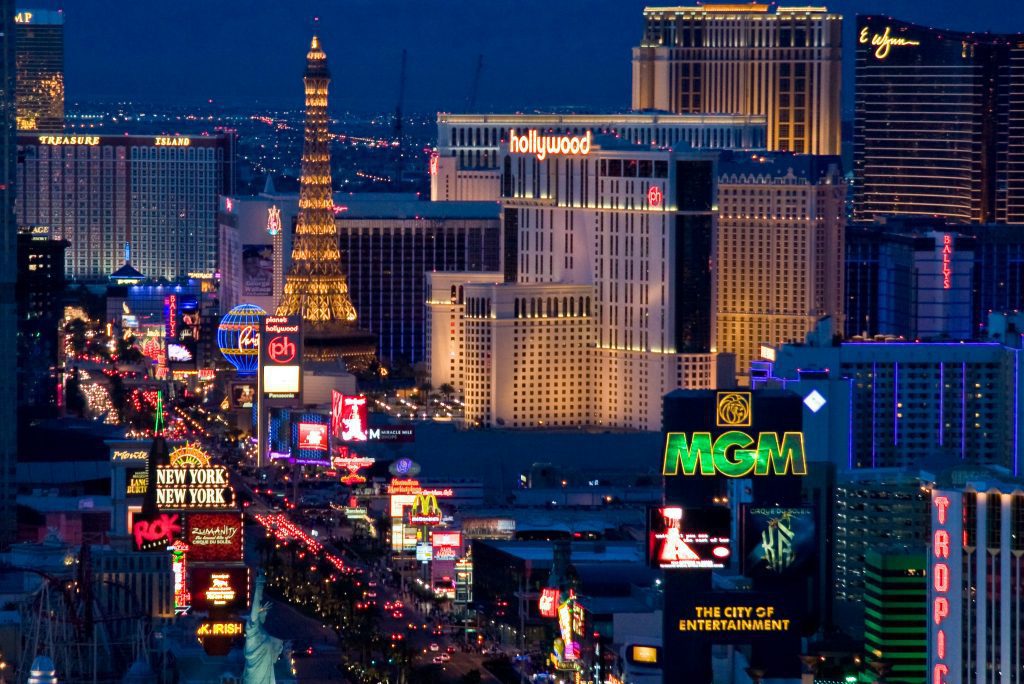 Relaxed restrictions on crowds puts Sin City on track for an accelerated recovery over the duration of the rest of 2021, but MGM Resorts still has to grapple with a lagging comeback in Macao, its other key gaming market.

MGM Resorts — the global casino operator behind many Las Vegas properties like Bellagio and Mirage as well as venues in China and across the U.S. — is a good financial bellwether for how things are going in the gaming industry.

While the company’s first quarter performance still drastically lags pre-pandemic levels, the company’s leaders see momentum in bookings and advance sales of events. The financial odds appear in favor of the house, at least at MGM’s Vegas properties.

“It’s been great to see Las Vegas come alive again as the vibrant destination that we’ve all come to know and enjoy,” MGM Resorts CEO William Hornbuckle said on an investor call Wednesday. “Our gross bookings in March were one of the best months in the company’s history.”

Hornbuckle may be optimistic on where the company’s performance is heading, but the company still dealt with a turbulent first quarter compared to pre-pandemic times. MGM Resorts posted a $332 million loss. Revenue at its Las Vegas resorts was down 52 percent from the same quarter in 2020.

But there are other signs the company has the opportunity for an extraordinary summer.

March occupancy rates at MGM’s Las Vegas resorts averaged 62 percent, with 85 percent occupancy typically on the weekends and 52 percent during the week. That outperformed the U.S. hotel average, which have hovered just shy of 60 percent for weeks, according to STR. April occupancy rates, so far, averaged about 73 percent.

More entertainment revenue becomes possible across the second quarter, as Las Vegas casinos can go to 80 percent capacity on May 1 and reduce social distancing to three feet.

This clears the way for nightclubs and pools, a major daytime entertainment revenue generator at casinos, to reopen. The Clark County Commission, which presides over the Las Vegas Strip, plans to lift all capacity restrictions once 60 percent of the county’s 1.8 million eligible residents receive at least one dose of a coronavirus vaccine.

“The pent-up demand has been incredible,” Hornbuckle said.

The nearly 21,000 tickets for Conor McGregor’s UFC fight against Dustin Poirier on July 10 at T-Mobile Arena, partially owned by MGM Resorts, sold out in less than an hour earlier this month. A 13,000-seat Dave Chappelle show slated for MGM Grand Garden Arena later this year sold out in hours.

Capacity into Las Vegas McCarran International Airport is slated to be at 93 percent of pre-pandemic capacity in June and at 99 percent as early as July, Corey Sanders — MGM’s chief operating officer — said.

While convention business is still non-existent, the city will have its first jolt of city-wide event business in June when World of Concrete, a construction trade show that drew 60,000 attendees when it last took place in 2019, reconvenes. Nevada officials granted approval last month for the event to resume this summer following last year’s pandemic shutdown.

Industry analysts see a successful operation for the event as vital in the path to a full business recovery for Las Vegas hotel owners. Weekend leisure travel is further along in getting back to pre-pandemic levels, but conventions returning to the city will boost mid-week occupancy rates and daily rates.

Convention business will be key in getting back to 90 percent average occupancy rates in Las Vegas, Hornbuckle said.

MGM Resorts doesn’t exclusively operate in Las Vegas, and slower recoveries in casino markets across the U.S. and China will dictate the timeline of the company’s ability to reach a full recovery.

Cross-border travel is limited, and easing travel restrictions with Mainland China as well as Hong Kong are key in reviving the Macau gaming industry. The city’s overall gaming revenue fell roughly 80 percent last year due to the pandemic, according to Macau’s Gaming Inspection and Coordination Bureau.

The premium gambling business is back to half of its pre-pandemic levels while VIP, those spending the most, is only at 20 percent of where it was before the health crisis, MGM competitor Las Vegas Sands reported on its own earnings call last week.

But there are signs things are looking up for MGM Resorts. The company’s $296 million first quarter revenue in Macau was up 9 percent from the same time in 2020. MGM’s China portfolio recovered to about 40 percent of its pre-pandemic 2019 levels.

The company isn’t giving up on the region and plans to expand its two resorts with more hotel rooms and other entertainment options.

“I am confident about Macau’s longer-term growth prospects and believe our investment will ultimately bear much fruit,” Hornbuckle said.

Along with future resort growth, the MGM Resorts team was extraordinarily bullish on its BetMGM online gaming and sports betting platform in partnership with British gaming company Entain.

Online gaming has been a major focus for MGM in recent years. Entain turned down MGM’s $11 billion offer earlier this year. Barry Diller’s IAC/InterActive took a $1 billion, or 12 percent, stake of the company last year with the intention of beefing up its online gaming presence.

“Today, we see this space as a three-horse race,” Hornbuckle said without naming any specific leading competitors like DraftKings or FanDuel. “We are incredibly excited about this trajectory in the sports betting and gaming market.”