A lot of data and other metrics are being tossed around when prognosticating about the recovery of the travel industry. What we aren't hearing so much about is the prolonged impact of anxiety and stress that Covid-19 leaves in its wake. Let's not discard that fallout. The travel industry cannot ignore the psychological effects of the Covid-19 crisis. While consumers intend to travel, these best intentions could be short-circuited by self-preservation driven by anxiety and fear.

The message is clear — consumers want to travel again. The intent is there. Many data points paint a picture of pent-up demand, driven by our collective social isolation and national impatience. We’ll get to that data in a minute.

However, when put in practical terms, we can’t help but think there’s something huge missing in this equation, and that is fear.

The human toll of Covid-19 remains to be seen. But the fear and general sense of unease it generated has already impacted our decision-making process and personal well-being.

There are critical questions that haven’t been widely addressed from a behavioral psychology perspective, as they pertain to the travel recovery timeline:

Not having a Ph.D. in psychology ourselves, we spoke to someone who does.

Jamie Howard, Ph.D., is a senior clinical psychologist in the Anxiety Disorders Center at The Child Mind Institute in New York, and the director of the center’s Trauma and Resilience Service. She specializes in the evaluation and treatment of anxiety and mood disorders in children and adolescents. She also brings expertise in treating post-traumatic stress and adjustment disorders across the lifespan.

With Howard’s guidance, we take a closer look below at the psychology of the recovery and the practical implications for the travel industry.

We all want an escape from the Groundhogs Day (you know the scene I’m referring to) lifestyle of these last few months, and the numbers prove it.

According to the latest research from travel marketing group MMGY and the US Travel Association, nearly 40 percent of Americans say they plan to take a domestic leisure trip in the next six months. This is an increase of 7 percent from early April.

Somewhat surprisingly, 20 percent of those surveyed say they are planning to travel internationally during the same time period 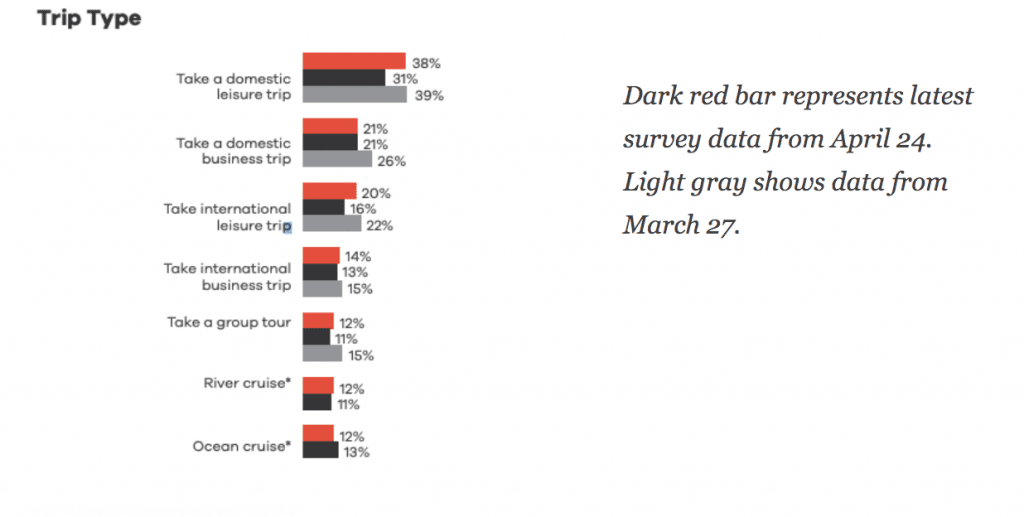 This data is hugely valuable and points to some green shoots ahead, as do the early booking trends coming out of countries such as China.

However, looking solely at these data points would lead us to believe that we’re perhaps close to a significant recovery in the United States. That’s far from a sure thing.

As an industry, we need to dig past the surface of intent-driven metrics to engage in conversations around deeper-seated issues affecting the recovery.

If we don’t, we risk doing ourselves, and our customers, a disservice by failing to address the current and potential future psychological impact that Covid-19 has left in its wake.

Only then can we restart the travel economy and communicate to travelers in a thoughtful manner.

So where does “intent” end and “action” (bookings) begin?

According to Howard, it’s all about our natural drive as humans towards self-preservation.

“We like to stay alive,” said Howard. “It’s unclear right now how safe it is because we’re getting mixed messages. There’s too much uncertainty…when there’s a little more clarity about relative risk, I think people will be more willing to make a calculated risk [to travel]. But we’re not in control of that calculation right now.”

At the macro level at least in the United States, it might be a while until mass testing and contact tracing programs are at full capacity. With increased testing comes data on infection rates and with that, perhaps details emerge that help people make educated purchase decisions.

Within travel, some companies are already leading the charge.

Most major U.S. air carriers have implemented PPE policies for their staff, with some extended to the flying public as well. This serves to mitigate some, but not all, of the risk associated with flying in the age of Covid.

No, we’re not talking about the amazing Joe Rogan show from the early 2000s.

Although, thankfully, we seem to be on the downward slope of infection and death rates in some major American cities, the fear is not receding.

Earlier in April, Skift reported that one-third of travelers wanted to take a trip within three months after stay-at-home restrictions were lifted. However, Skift added that “the lingering fear about the virus and the new routines developed during the shelter-in-place seem to lead to changes in travel patterns.” It’s a two-headed monster — the fear of returning to society without a vaccine or treatment plan in place and fear of the unknown and what’s to come.

The byproducts of fear are anxiety and depression, and both are unfortunately on the rise.

According to ThriveNYC, New York City’s multi-agency partnership to close gaps in mental healthcare, website traffic rose by 58 percent in April vs. March of this year.

Yale University conducted a nationwide poll in early April and asked ‘how much, if at all, has worry about the coronavirus harmed your mental health?’

A majority of respondents, 54 percent, said their mental health was harmed at least ‘a little.’

Howard said that, in this case, anxiety is driven primarily by the uncertainty surrounding the virus and what comes next. She believes that for most people, the single biggest game changer will be easy access to a vaccine.

There are, however, different factors that contribute to an individual’s overall tolerance of uncertainty and fear. For example, those with pre-existing diagnoses of anxiety or depression may have a lower capacity for tolerance, and thus a harder time adjusting to our new normal of Covid co-existence.

Even for people with clean bills of mental health, rational decision making around when to go into the office, when to send kids back to school, and yes, when to travel again, might not be possible until the warm blanket of a vaccine is available.

We also asked Howard about PTSD (post traumatic stress disorder), and whether we as a society will experience some form of it.

She stated that although this is a stressful time, for most people, it’s not technically a traumatic event. To experience true trauma, there needs to be an immediate physical threat to your life or to others, where you are a witness.

This means PTSD could still affect some Americans, unfortunately including first responders and those on the frontlines of the pandemic.

On the topic of PTSD, Howard added “for most people this is a significant stressor, but does not rise to the level of trauma because they aren’t worried about being in acute risk of danger. For many people, social distancing and the economic impact are just as stressful as the risk of getting sick.”

If you’re a glass-half-full kind of person, perhaps there’s a positive spin to all of this.

By and large, we aren’t going to be a nation or world suffering from the very real and debilitating effects of PTSD. Although this is a very stressful time with balancing work and kids, disinfecting our packages, and fearing the grocery store, perhaps our natural resilience will power us and the recovery.

On the flip side though, is it that hard to imagine a world where a vaccine eludes even the finest medical researchers for a year or longer and uncertainty persists?

Jared Alster is co-founder and chief strategy officer at Wildebeest. This article is an edited version of a post that appeared on the Wildebeest blog and on LinkedIn.

Photo Credit: The psychological toll from Covid-19 needs to be considered as part of travel's recovery. F8studio / Adobe