Since Klook's launch five years ago, big changes have occurred in the sector. TripAdvisor bought Viator, TUI-Musement, and Booking-FareHarbor, and most recently, Airbnb invested in Atlas Obscura. All this, plus competition from online travel agencies, will test Klook's playbook, even though its strategies seem sound for now.

Tours and activities seller Klook expects another strong performance in 2019, its fifth anniversary year, despite troubles in north Asia impacting the business.

The Hong Kong-based company is projecting more than 60 million bookings this year and is striving for another triple digit year of growth of gross revenue, just like it recorded in 2018, co-founder Eric Gnock Fah told Skift.

Revenue last year amounted to $1 billion, Klook claims, but declined to reveal the number of bookings, which would give an idea of its average booking value.

A projection of 60 million bookings is high when compared to the bookings of rival GetYourGuide, which, like Klook, recently received funding led by SoftBank Vision Fund. The Berlin-based company told Skift it sold 10 million tours, activities and attraction tickets in the nine months between June 2018 and March 2019.

But what counts is not how much Klook is selling but what it is selling and the unit economics, according to tours and activities expert Douglas Quinby.

“If you look at Klook’s listings for top destinations across Asia, some of the top-selling products [WiFi and SIM card packs, transfers and transport tickets, and some sightseeing tickets] are very low-cost products, many selling for less than $10 or even $5,” said the founder and CEO of Arival. “They have also been very aggressive in selling other higher-priced tours and tickets at aggressive discounts. Some operators report seeing pricing on Klook near wholesale rate levels.”

“Klook appears to be pursuing a growth strategy smartly tailored to the Asian market. They have focused on products that are relevant to younger, cost-conscious travelers from the region – products you don’t always see on other global OTAs. The big question is whether those customers purchasing $4 SIM cards today will book $50 experiences next year…But we have seen this playbook before across Asian markets: invest first in acquiring customers, and profits will come later. And there appears to be plenty of capital, patience and appetite from investors,” added Quinby.

According to leading tours and activities meta-search engine TourScanner in its just released annual report 2019, the average booking value of players in the sector is $157. Assuming Klook achieves a triple-digit 100 percent growth in revenue this year, over 2018, it will rope in $2 billion in revenue. Based on 60 million bookings, its average booking value will be $33.33.

Klook needs to achieve a much higher triple-digit growth in order to reach the sector’s average of $157.

Sticking to the Playbook

But given the Hong Kong pro-democracy protests, China’s economic slowdown, South Korea’s brawl with Japan, that’s a moot point. Gnock Fah, however, said bookings remain strong for the Hong Kong-based company because, unlike a crisis like SARS, travelers are continuing to travel, just to different destinations.

“China is our number one outbound market, however, the trade war is impacting the manufacturing sector the most and this affects mostly group tours, whereas on the FIT [Free Independent Traveler] side, which is coming more from the services industries, we haven’t felt so,” he added. 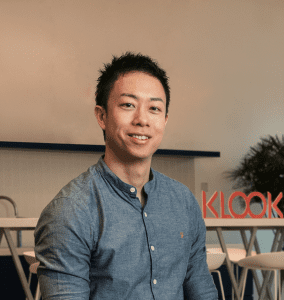 Asked when Klook will be profitable, Gnock Fah said “when we say it’s time to go for (an) IPO,” declining to give a timeline. But he stressed Klook is not burning cash to acquire customers. “In many markets that we’re in, we are comfortable with the unit economics; it’s not like we’re in a hole where we continue to be burning cash, in fact, investors will be pleased with the health of the company,” he said.

Travel, said Gnock Fah, is different from ridehailing. “Not saying that Uber is a bad business, just saying that travel dynamics  is different from ridehailing, which is hyperlocal. We, on the other hand, depend on a global network and that is not something that is built by burning a lot of cash but by building a very strong foundation and looking at profitability, unit economics, retention rate, customer service, and so forth.”

For Klook, that foundation is based on strengthening what it believes is its competitive edge: understanding a new set of customers who are mobile-first and who book in-destination; giving them all the products they want in-destination; and growing the global network, both demand and supply.

“As we’ve seen, having a global network has helped us weather the current turmoils,” he said.

Still, 85 percent of Klook’s users are in Asia, which is why it is bent on expanding international source markets. Europe is key as Klook is seeing growth in bookings from the U.K., France and the Netherlands, said Gnock Fah. On the other side,  more Asian travelers today are veering towards Europe than the U.S., thus having the supply in Europe is important.

A measure it is taking to increase bookings from Europe is launching a multiple languages option including French, Italian, Spanish, Russian and German in the coming months.

A Europe expansion however puts it in competition with GetYourGuide. Asked about speculations over a potential consolidation with GetYourGuide, Gnock Fah said, “Both the investors and us are all about growing the company…We’re more focused at the moment on growing our own teams.”

Besides, they are different.

“Two angles,” said Gnock Fah, “one, we focus on knowing what our customers want, and we offer them a wider scope. Klook is more than just tours and activities. We’ve evolved into a one-stop shop for anything that customers want in-destination, from tours and activities and attractions all the way to Wi-Fi connectivity, airport transfers, rail [bookings], and food and restaurants, which is integral for a traveler on the road. We have built that kind of expertise over so many categories of business, so this is an edge.

“The other edge we bring is a hyper-localized go-to-market strategy because what a Chinese wants versus what a Korean wants versus what a European wants is all different. We work with our supply partners and educate them about this and about catering to a new set of customers. In the beginning, for example, Asian operators were serving Western baby-boomers who are comfortable with desktop bookings, the focus of the OTAs. Now, operators have to think how to serve Asian and Western millennials and we are advocating for mobile-first and in-destination bookings.”

But whether or not Klook can take on Western competitors in their home grounds remains to be seen. TourScanner’s report shows travelers (the majority of TourScanner’s customer base are Americans and Europeans) still prefer desktop services (54 percent), although the percentage of mobile bookings remains relevant (38 percent).

Meanwhile, Klook says it will continue to invest in Asia-Pacific. Among efforts, it will further help local operators digitize operations, from booking and redemption to post-experience reviews, and connect them to AI-powered voice assistants including Actions on Google.

In addition to its current engineering hub in Shenzhen, China, Klook will expand its innovation capabilities to Singapore. It believes this dual-hub will allow it to “glean more behavioral insights through data analytics to improve the experience for both customers and merchants.”

It is also expanding its rail offerings. From Thursday, September 12, it is working with West Japan Railway Company (JR West) on several initiatives for the Southeast Asian market, such as combining a JR-West Rail Pass with popular experiences such as Harukas 300 Observatory tickets, and doing co-marketing initiatives to attract more South-east Asians to discover western Japan.