Although much focus as of late has been on Airbnb's ability to become a new kind of online travel agency, we shouldn't lose sight of the fact that it continues to be a major disruptor to the traditional hotel industry, too.

While the hotel industry has said Airbnb isn’t as big a threat to their business as some may think it is, a new report from Morgan Stanley Research suggests otherwise.

The report, called “Who Will Airbnb Hurt More — Hotels or OTAs? … One Year Later,” used survey data collected from more than 4,000 consumers in the U.S., UK, France, and Germany to demonstrate the competitive threat of Airbnb to both hotels and to online travel agencies (OTAs).

That threat, says Morgan Stanley Research, is greatest for hotels because “Airbnb usage has increased more than we thought it would and cannibalization of traditional hotels has also been higher.”

Brian Nowak, executive director of Morgan Stanley Research, wrote in the report: “Our AlphaWise survey shows rising Airbnb adoption (now approximately 18 percent of travelers) with demand increasingly coming from hotels.” He added, “While still small, we believe Airbnb has been almost double the threat to hotels in 2016 than previously believed, and the threat is growing.”

It should also be noted, however, that Morgan Stanley is an investor in Airbnb, and in December, Airbnb bought back approximately $94 million in stock from the investment company. While this report, in particular, was drafted to provide investment guidance on lodging and online travel agency stocks for its investors, it’s still worth noting that Morgan Stanley still has a financial stake in the success of privately owned Airbnb, which is now valued at more than $30 billion, based on money raised. Among those surveyed, approximately 49 percent also said they had replaced a traditional hotel stay with an Airbnb stay in 2016. In 2015, 41 percent had done so. Morgan Stanley predicts this number will remain steady throughout 2017 and Airbnb’s cannibalization of hotels business will hover at approximately 50 percent for both business and leisure travel. 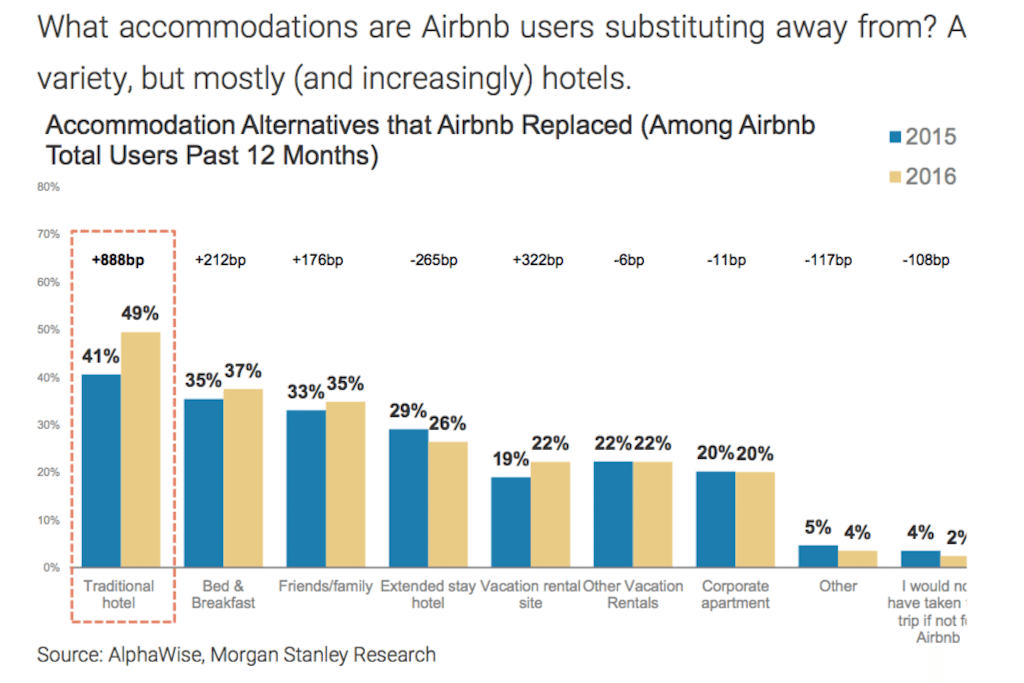 Not only does Morgan Stanley believe the number of Airbnb users and room nights will continue to grow, but it also estimates that Airbnb will have a direct negative impact on hotels’ ability to maintain the same levels of occupancy and nightly rates that they have in the past year.

By 2018, Morgan Stanley estimates overall lodging occupancy in the U.S. and Europe will fall to 66.8 percent from 67.6 percent in 2016. And because the hotel industry saw its second lowest level of nightly rate growth in 2016 in 20 years, excluding the recession, Morgan Stanley also believes Airbnb will be a drag on hotels’ revenues in the years to follow as they lower nightly rates to boost occupancy. Morgan Stanley forecasts that in 2016, Airbnb will have decreased U.S. and European hotels’ revenue per available room (RevPAR) by nearly 1 percent, and that in 2017, that dent will rise to 1.8 percent, and it will be 2.6 percent in 2018.

Not only that, but hotels have fewer compression night opportunities to raise prices when cities have city-wide occupancy rates of 95 percent or more. From 2015 to 2016, for the first time since 2009, the number of compression nights in the top 25 U.S. markets actually dropped about 20 percent, suggesting that alternative accommodations providers like Airbnb may be making a dent in hotels’ ability to fill rooms during major citywide events.

This sentiment was recently expressed by Laura Paugh, Marriott International’s SVP of Investor Relations, at a lodging industry conference in December.

Paugh said that when it comes to compression nights, “We don’t get as much ability to really press pricing as much as we’d like. In a time like that, where you could conceivably see big increases in room rates to deal with that sort of demand compression, you’ve got less demand compression because of Airbnb.”

She did note, however, that Airbnb does not appear to be chipping away at Marriott’s corporate travel business. “We’ve not seen it really making headway in the corporate environment, which is really our bread-and-butter business.”

Just how big of a threat is Airbnb to hotels in the next few years, however, will likely hinge on the company’s success in converting business travelers into regular Airbnb users. While Airbnb is growing in use among leisure travelers, 70 percent of room nights in the U.S. lodging industry are generated by business travel. When it comes to OTAs like Booking.com or Expedia, Morgan Stanley sees Airbnb as an opportunity, as opposed to a threat. However, since this report was published prior to Airbnb’s announcement of its entry into tours and activities and news reports of its foray into flights, it’s arguable whether this assessment will stay the same heading into 2018.

As more OTAs like Priceline Group and Expedia expand their inventory of non-hotel accommodations, ranging from bed and breakfasts and chalets to apartments and more, it’s likely those “alternative accommodations” could drive up as much as a third of future bookings growth, Morgan Stanley estimated.

Who’s Using Airbnb and Why

In its survey, Morgan Stanley found user frequency of Airbnb in 2015 and 2016 remained constant, with respondents using Airbnb an average of approximately 3.3 times per year in 2015 and 3.2 times in 2016.

Consumer awareness of Airbnb is also very high, ranging from 62 percent in Germany and France and up to 76 percent in the U.S. Morgan Stanley estimates only about 25 percent of travelers who know of Airbnb have used the service at least once, so there is tremendous growth opportunity for Airbnb as its awareness continues to rise.

Of those surveyed who have used Airbnb, 93 percent reported they were satisfied with the service in 2016, up from 90 percent in 2015.

However, among those respondents who are aware of Airbnb but have not used it, the top reasons for not using Airbnb relate to concerns over privacy (30 percent in 2016, 19 percent in 2015) and safety (9 percent in 2016, 7 percent in 2015), and those concerns have actually grown in the past year. This could be a major hindrance to Airbnb’s efforts to grow its corporate travel business, as well as to potentially launch its new Airbnb Lux category of luxury accommodations and experiences later this year.

The No. 1 reason why respondents are using Airbnb still relates to price (53 percent), followed by location (35 percent), authentic experience (33 percent), and “easy to use site/app” (28 percent). The fact Airbnb’s site and app were noted as one of the top reasons why people choose to use Airbnb is a good sign for Airbnb as it evolves into a company that is more than just a marketplace for places to stay.

However, although many Airbnb users turn to Airbnb for lower prices, Morgan Stanley found that 71 percent of U.S. respondents who use Airbnb earn an annual income of $75,000 or more, which is up from 66 percent in 2015. This suggests that while Airbnb users do tend to be younger (51 percent of respondents who used Airbnb were under the age of 35), not everyone who uses Airbnb is a millennial, student, or someone who has a lower income. Only 39 percent of non-Airbnb users earned annual incomes of $75,000 or more.

For now, Airbnb users also appear to be using Airbnb for longer stays as opposed to one-night stays. In its survey, Morgan Stanley found 6 percent of Airbnb stays are one night and 22 percent are for six nights or more. Twenty-six percent of hotel users, by comparison, stay for just one night.

Photo credit: A promotional image from Airbnb depicting a business traveler staying in an Airbnb. A new report from Morgan Stanley Research suggests Airbnb's success in becoming a major competitive threat to traditional hotels hinges on its ability to succeed in growing its usage by business travelers. Airbnb / Airbnb