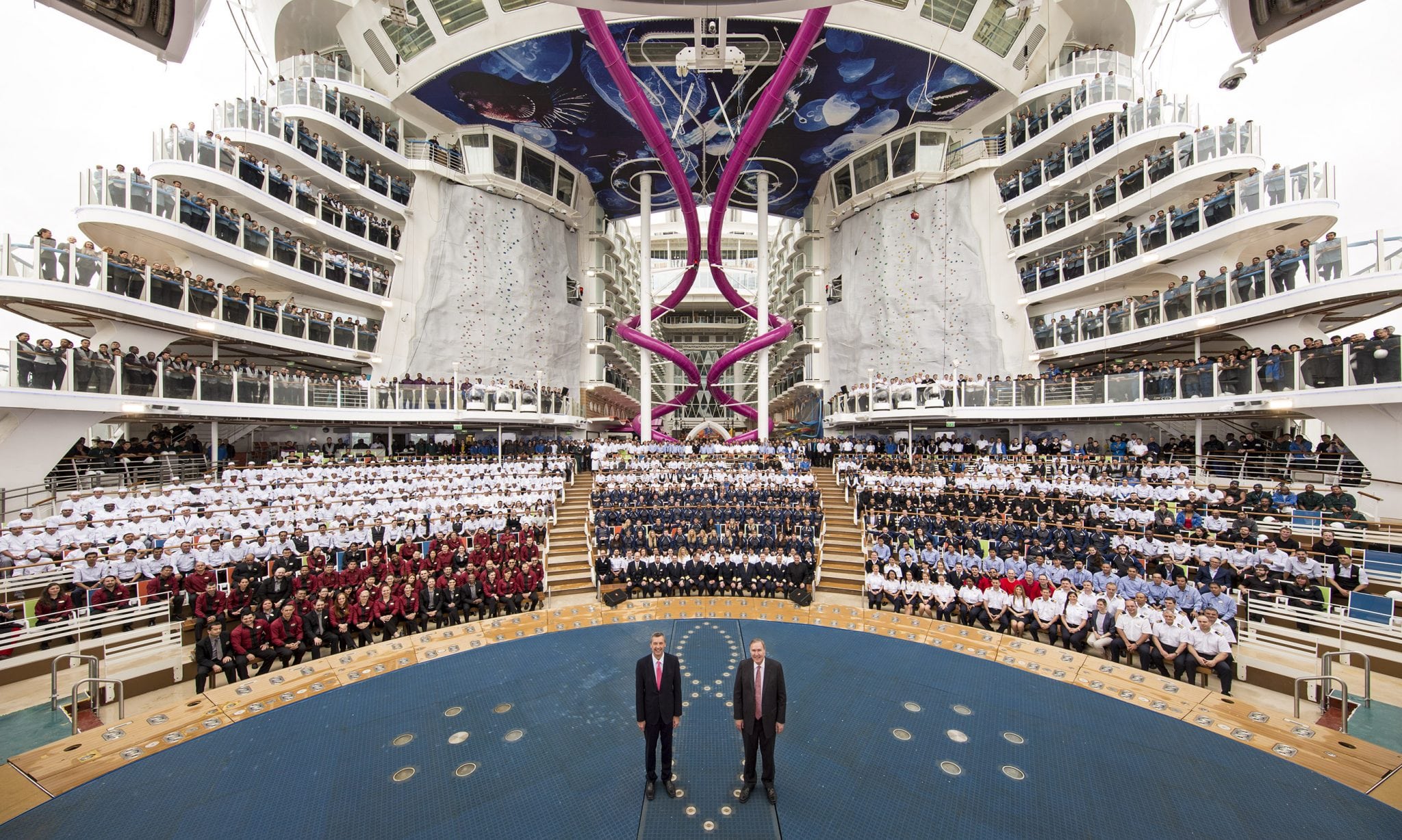 It’s been a big couple of months for Royal Caribbean International.

The cruise line welcomed two giant new ships back to back — Ovation of the Seas in April, followed by Harmony of the Seas earlier this month.

The newest ship, which embarked on its first short preview cruise Friday, is now officially the largest cruise ship in the world. Harmony is the third Oasis-class ship from Royal Caribbean International, following Oasis of the Seas and Allure of the Seas. But it is slightly larger than its two sister ships and can hold several dozen more passengers — 5,479 at double occupancy. [Update: After this story originally published, parent company Royal Caribbean Cruises announced that it had agreed to buy a fifth Oasis-class ship, due in spring of 2021.]

Harmony of the Seas is sailing Mediterranean voyages for now; it will head to its new home port in Fort Lauderdale and cruise the Caribbean starting in November. Ovation of the Seas is bound for China, a focus area for Royal Caribbean. And a smaller, much older vessel that most recently sailed for the Spanish brand Pullmantur — Empress of the Seas — is being renovated before sailing from Miami at the end of the month. Royal Caribbean is expected to use that ship for Cuba trips once it receives government approval to visit the island.

In a phone interview, Bayley spoke to Skift about the opportunities that come with a new ship, why being the biggest cruise line doesn’t really matter, pushing into new markets, and descending into the “Ultimate Abyss.”

Skift: This is technically the world’s largest ship. I think Royal Caribbean International has, if I’m not mistaken, already the world’s five largest cruise ships between the Oasis- and Quantum-class ships. I guess this is just adding one more, but what does it mean? Is it meaningful in anyway to have the new world’s largest ship? Does it just get that much more attention?

Bayley: That’s correct. Harmony of the Seas is the sister of Oasis and Allure. Harmony, though, is this kind of the fusion of Quantum class and Oasis class — it’s the largest ship in the world and it’s the newest ship in the world. It has all of the refinement and the improvements that come from both the Oasis and Quantum class. It has lots of nice additional features as well.

I guess if you think about it like a new car class: every follow-up with customer feedback, everything that needed tweaking, improving, and then the merging of new ideas, and then all of a sudden you just introduce something that’s super lovely.

Skift: I think that now you have 25 ships in the fleet when you include Empress, right?

Skift: So I guess that ties Royal Caribbean with the other very large individual cruise line, Carnival in terms of number of ships. But I thought to myself, “You know, I’m sure Royal has, of any cruise line that exists, that you have the most capacity.” I did some checking and it looked like you guys crossed that boundary, or set a new record, when Quantum came back in 2014 as having the most capacity of any individual cruise line. I don’t know if that’s even something that you track, or have paid attention to, or matters to you, but I do think it’s kind of interesting and not something that anyone really noticed.

But we honestly don’t pay much attention to that. It’s truly about customers, and guests, and trying to deliver these great vacations, which Harmony does in the most beautiful way.

Skift: So we shouldn’t expect to see that in all of your press releases moving forward?

Bayley: To see something like “the largest cruise line in the world?” No, I think…I’m not sure. I think occasionally we may put something like that in there, but it’s not really something of huge importance to us. I’m not sure it’s particularly important to our travel partners or our customers. I think people associate themselves with Royal Caribbean because of the fun innovations, the quality of the service, and the experience that we deliver. I think that’s far more meaningful than telling people you’re the biggest cruise line in the world.

Skift: You just welcomed Ovation, and Harmony is now part of the fleet. You’re also bringing back some of the older ships. So why does it make sense for Royal to be expanding in both directions, both with very new capacity and giving life to older ships also?

Bayley: We also have Oasis Four coming in 2018. We also have Quantum Four and Five coming in 2019 and 2020. To answer your question, it’s very connected with customer demand. If, obviously, we see demand and we see markets growing, then we believe that we have the brand and the product to deliver a great vacation experience when it comes to either bringing back ships, or building new ships and delivering that vacation experience.

Skift: I’m sure one size doesn’t fit all, and I don’t know if there is a group of customers who have been long-time Royal fans who are just more comfortable on an Empress-era or Majesty-era ship as opposed to a Harmony, or Ovation, or one of those classes. Do you see that there are niches of people who want Royal Caribbean experience but not the new Royal Caribbean experience?

That’s not the majority. A ship typically is put into a market and an itinerary, and then we offer the product to customers at a price point, and then people vacation with us.

Skift: I’m thinking back to when the Quantum class was first announced, and I think that was 2011. That was two years after Oasis launched. I don’t know if Royal Caribbean sticks to a time table for all new classes of ships, but given that we’re two years out now from when Quantum launched, are you working on what comes next?

Bayley: We are perpetually thinking about what’s next. That’s been pretty much all we’ve done for many, many years. Actually, many decades. You’re right. Typically when we introduce a class, or coming to the mid-life of a class, or towards the end of a class, then we’re not too far away from talking about something new, something different. That’s very typical for us.

Absolutely we’re thinking and working through what’s next, but we’re not going to say anything because Harmony has just arrived, Ovation’s just arrived and we’re very excited by both of those ships.

Skift: Do you expect there to be people who have gone on Oasis and Allure who will come back to Harmony just to see what’s new?

Bayley: Oh yeah, absolutely. Harmony in Europe and Harmony when it comes across to the Caribbean really is our top seller. We’ve got past guests who are sailing on Harmony that want to see the new ship, and lots of first-timers as well. Really, when you think about it, that’s one of the key objectives of a brand new ship the quality of Harmony. It attracts so many different customers’ attentions. It gives us the opportunity to further extend the brand and further allow people to take a look at Royal Caribbean and hopefully come and experience it.

Skift: What is keeping the Oasis class from China? Are there infrastructural issues now that mean that those ships couldn’t go there, or is it just a matter of deploying the capacity that you have to the places where it makes the most sense?

Bayley: I think when we first designed Oasis class, the belief was that we’d keep it always in the Caribbean. In fact, that’s what happened with Voyager class. It’s happened to many classes before. We start with one intention and then very quickly realized that this can handle all over the place. And then we start broadening the horizon.

China is very much a key market for Royal Caribbean. It’s a growing market. It’s got a lot of opportunity in the future and already today. We’ve currently got several ships in the China market, and we’ve been growing our presence. That’s why Ovation of the Seas, the latest Quantum-class ship is going there to join its sister, Quantum. I think that at some point we’ll probably see an Oasis-class there, but there are considerations, as you pointed out, with regards to port infrastructure, etc., etc. Which, as usual, we work our way through.

Skift: And when it comes to China, you have been the biggest single brand there. I know that a lot of competitors are coming that way in the next couple of years, some of them for the first time. How is that going to change the way that you do business there, or is it changing that at all?

I think as we look at our situation, we’ve been developing and in the market for nearly nine years. We’re the recipients of the best cruise line in China for the past eight years in a row. We’re the company that has the newest, best ships in the market and we continue to move forward. We’re obviously excited about the future of that market, equally as we are for the United States, which was, is, and will always continue to be one of our biggest markets.

Skift: That brings me to my next question which comes straight out of your last earnings call. A lot of the conversation was about the struggle to get North Americans to Europe this year given security concerns and the lingering effects of the attacks in Paris and Brussels. The flip side of that is there was so much activity closer to home when the Caribbean has been, for many cruise lines, a weak area in the past few years. What does that pattern this year mean to your efforts, especially to attract more first-timers who I assume are more likely to take their first cruise when they’re closer to home?

Bayley: One of the positives about being a large cruise line or a global cruise line is that you have presence in many markets, and you have products in many markets — nearly all of the desirable destinations. It’s certainly true when you see some kind of weakness in one geographical region. It doesn’t mean people don’t go on vacation, it means that they just choose a different destination.

Caribbean, Bermuda, Alaska, those have been really good this year. There’s lots of demand. That’s a positive. I think certainly we have a focus on [new-to-cruise]. We put some of our marketing efforts and energy into communicating with new-to-cruise. We’ve seen quite a nice lift in new-to-cruise coming to the Royal Caribbean International brand this year.

Skift: Is there any way you can quantify that?

Bayley: No. Mostly because it’s very competitive. We’re pleased with what we’re seeing the increase in new-to-cruise. Sorry, that’s all I can say.

Skift: I would be remiss if I didn’t ask about Cuba. Do you foresee sending a ship to Cuba this year? Are you confident that the talks, whatever you’re doing with the Cuban government, are going in a productive direction for that?

Bayley: Yes. We’re optimistic that at some point everything — all of the approvals and whatnot — will be received, and as soon as they are we will make an announcement. I think it’s reasonable to assume that over the coming weeks and months, hopefully there will be a series of announcements.