Southeast Asia owes much of its tourism growth to China but people from within the region are also generally more interested in travel than they were 10 years ago. It's a region that's social, mobile-dependent and interconnected that make it the ideal testing ground for the future of travel.

Europe and the U.S. still claim the most international visitor arrivals and the highest travel and tourism GDP — and will for the foreseeable future — but Southeast Asia has a big advantage over the other two regions: China.

China’s 120 million outbound travelers, the world’s largest outbound market, are the main tourism feeders for Southeast Asia and most Chinese outbound trips beyond Hong Kong and Macau are to Southeast Asia destinations.

Southeast Asia’s travel and tourism contribution to its GDP grew faster than any other region in 2015 –7.9 percent year-over-year — as the locus of global travel moves eastward and massive middle classes in Southeast Asia see disposable income levels rise, according to the World Travel & Tourism Council’s (WTTC) 2016 economic impact report on Southeast Asia.

That region’s travel and tourism GDP growth is far above Europe’s and North America’s, for example, with 2.5 and 3.1 percent year-over-year growth, respectively.

WTTC projects that region’s international arrivals, which were 105.7 million in 2015, will increase 82% to more than 192 million travelers by 2026. Its travel and tourism total contribution to GDP was $301.7 billion in 2015, or 12.4 percent of total GDP, and that’s expected to grow by 5.8 percent per year during the next 10 years, with much of that growth attributed to China.

“Outbound travel from China was 58 million in 2010 and it’ll be 175 million by 2019,” said David Scowsill, WTTC’s CEO. “When people travel outside of China for the first time they go to Southeast Asia. You have a destination like Singapore creating new products every two to three years to encourage Chinese travelers to come back. Also, people within Southeast Asia don’t need visas to move between many countries so visa facilitation is a key part of it.”

“China also built out its airport infrastructure years ago ahead of demand peaks and we’re already seeing airports like Beijing making expansion because of the demand. Low-cost carrier explosion in Southeast Asia is also fueling this growth. These kinds of carriers do a better job at providing connectivity between smaller cities too, not just large hubs. North American and European legacy carriers are not as good at smaller cities.”

For the first time since the European Renaissance, travels growth is not centered in Europe and the U.S. Southeast Asia’s very mobile and social population — and its Chinese visitors — define many current traveler trends, which Skift’s Manifesto on the Future of Travel in 2020 purports.

Chinese outbound travel spending grew 53 percent year-over-year in 2015 to $215 billion, which helped make Southeast Asia’s foreign visitor spending share of its travel and tourism’s GDP contribution the world’s highest (52.2 percent). The 120 million outbound Chinese travelers in 2015 were up from 109 million the previous year, a 19.5 percent increase, according to the Chinese National Tourism Administration.

Business travel also had a strong showing last year. Southeast Asia’s business travel spending was 28.4 percent of the region’s total travel and tourism GDP contribution, the highest percentage in the world for such spending.

But where does this growing tourism GDP go and how is it used?

“This investment goes into creating the airports, rail infrastructures, hotels and then the second area is to make sure that governments work within themselves and focus a couple times a year on the whole of the travel industry,” said Scowsill. “They do this in South Korea. South Korea holds the whole government accountable for tourism in terms of security, visas, etc and that government wants to work across ministries to help with tourism development. And thirdly, governments work with the private sector.”

“The private sector needs to put up capital to invest in infrastructure because both the government and private sector can’t do it on their own. Brazil, for example, used the private sector to rebuild Sao Paulo’s airport to get it open in time for the 2014 World Cup. That was a big change from Brazil’s previous system from the government [funding projects even if the funds didn’t actually exist for these projects].”

Of course China shouldn’t get all credit. Countries like Malaysia, Indonesia and the Philippines have burgeoning middle classes that also travel. But by far, China outnumbers them all and will continue to play a dominant role over the region’s tourism.

The following charts show the contributions of business versus leisure, and domestic versus foreign, to Southeast Asian tourism: 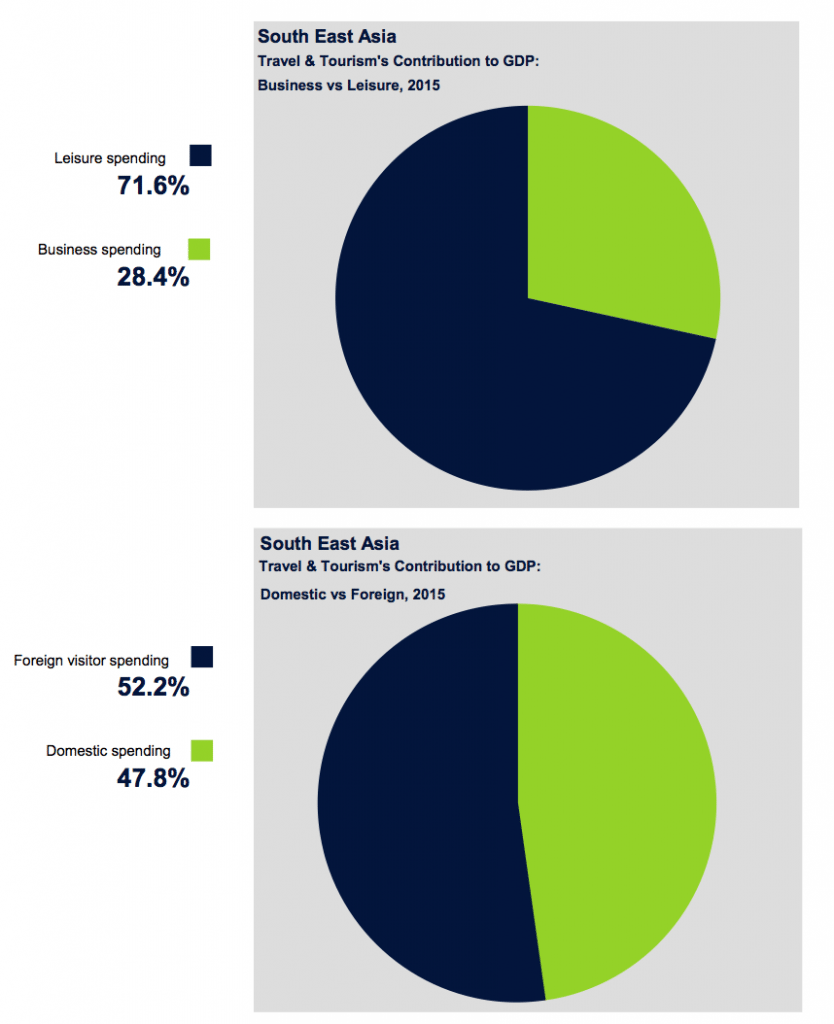