Priceline’s growth is the envy of its online booking peers, and the company sees the business that Huston built at Booking.com as its best path toward continued growth. Priceline’s third-quarter earnings saw its net income rise 39.5% to $833 million, propelled by a 36% jump in hotel room nights.

Asked about the management changes in Priceline’s third quarter earnings call, Boyd said the move was part of the Priceline’s long-term transition planning.

Huston leads “the biggest brand within the group,” Boyd said, adding that it was a “very logical and great choice for Darren to be CEO of the group.”

Boyd said he’s been involved with Priceline for 14 years and there is a personal element in the decision in that it gives him “the opportunity to do some different things.”

Boyd said his highest priority is to ensure the transition goes well, with Huston to assume the CEO role on January 1, 2014.

In turn, Huston said his focus would be “to stay the course,” and to work with the CEOs of the brands in the group to ensure the various units continue to execute.

“I couldn’t be more excited to take this next step with the group,” Huston said.

Several industry insiders said that Huston has been the heir apparent for some time, although the timing of the announcement took people by surprise.

Over the last few years, Priceline, feeding off the growth of Booking.com, has been kicking Expedia’s butt in the global hotel business. Few would have honestly predicted that Expedia Inc. CEO Dara Khosrowshahi would outlast Priceline’s Boyd in their respective CEO positions.

Priceline’s stock, which had been in the elite $1,000 a share club since late September dropped to $971 in after hours trading before bouncing back above $1,000. The stock is up over 60% over the last twelve months. 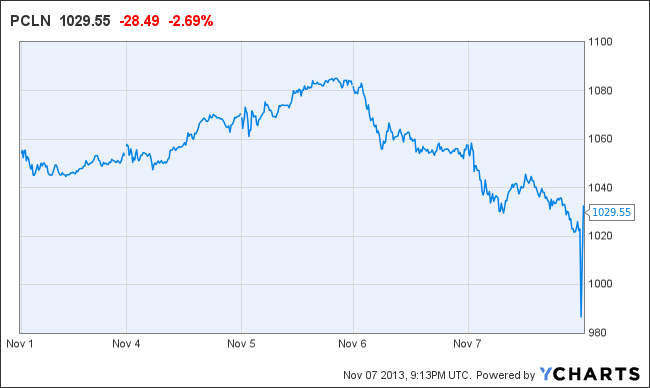 Mr. Huston is Chief Executive Officer of Booking.com B.V. (Netherlands), a wholly owned subsidiary of The Priceline Group and the number one online hotel reservation service in the world, a position he will continue to hold. Since January 2013, Mr. Huston has also been responsible for overseeing certain aspects of the Group’s international business, including inter-brand relations, distribution, and geographic expansion. Mr. Huston has been a member of the company’s Group Management Board since joining in September 2011. Mr. Huston came to the Group from Microsoft Corporation, where he served as Corporate Vice President, Consumer & Online from 2008 and President & CEO of Microsoft Japan from 2005. Prior to joining Microsoft in 2003, Mr. Huston was Senior Vice President at Starbucks Corporation, responsible for acquisitions and new product development. Mr. Huston holds a Masters in Economics from the University of British Columbia and a Masters in Business Administration from Harvard University.

“Darren has done a great job leading Booking.com, the Group’s largest business, delivering impressive growth and share gains,” said Mr. Boyd. “Darren is the right choice to lead the Group and I look forward to working with him closely as Chairman of the Board.”