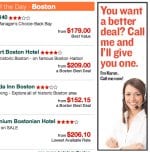 Getaroom is a niche player, but it is steadily growing and its unpublished rates over the phone are very appealing. Traditional online players may want to rethink their call center outsourcing and current practices.

Bob Diener is the sales, marketing and finance guy, who calmly and openly talks up the unique elements of his latest little project.

David Litman is the tenacious tech guy, focusing on the website, the call center operation, and customer service.

In the 1990s and through 2003, they guided their baby, Hotel Reservations Network, which became Hotels.com, as it engaged in a seeming grand theft of hotel market share.

Today, in a second act of sorts, Litman is the CEO of Getaroom.com, and Diener is president.

And, that’s precisely how just they defined their roles throughout their Hotels.com journey.

Working together has been easy, to a degree

Actually, the duo goes back even further than that, as the two have known each other, and worked together basically since their Cornell Law School days, which ended in 1982.

In 2009, years after making big money selling Hotels.com to USA Networks and seeing it later become an Expedia Inc. subsidiary, Litman and Diener founded Getaroom.com, an online and offline travel agency with plenty of twists.

“We’ve been partners for 30 years on a handshake deal,” Litman says.

“We complement each other,” Diener adds. “We’ve never had an argument in almost 30 years.”

That’s fortunate because Litman, based in Dallas near Getaroom’s all-important and company-owned call center operation, and Diener, who makes his home in the Miami area, talk “10 to 15 times per day,” Diener says.

It isn’t often that travel-tech entrepreneurs see lightning strike twice — Gregg Brockway (Hotwire and TripIt) comes to mind as an exception — and it is far from assured that Getaroom will ever even get into the same conversation with Hotels.com in terms of impact.

But, more than three years after launch, Getaroom is expanding globally in key And, it is focusing on broadening its reach to vacation rentals, apartments, villas, and ski resorts these days.

Getaroom differentiates itself with a seemingly unique unpublished rate program which, as the website puts it, enables consumers to “book by phone and save big.”

Consumers can call the Getaroom toll-free number, speak to a company employee in the Dallas call center, and often get a steep discount off a property’s published rate as displayed on Getaroom.com and other travel websites.

I tried it and asked a Getaroom call center agent, some of whom came from Hotels.com, if she could give me a discount off the $399 published rate shown on Kayak and other sites for a room with a king-size bed at a 3-star hotel in downtown Boston for a September 18 stay.

The property wasn’t even listed on Getaroom.com. However, the agent offered the room to me for $265 — a 33% savings off the base rate as shown on Kayak, Hotels.com, and other sites.

Changes in the model

While most online travel agencies and airlines push customers to book online, Diener claims 50% of Getaroom’s bookings take place over the phone and that the model is unique.

The model has been tweaked subsequent to the company’s launch, and for many properties, the call center agent won’t even provide a rate until after the potential guest furnishes his or her credit card details.

“We are much more opaque than what we started with initially,” Diener says. “Our main concern was that we wanted to keep the rate integrity for the hotel.”

That was then and this is now

That willingness to accommodate hotels’ concerns is in bold contrast to what some would say were Hotels.com’s practices in days of yore, when the online travel agency often undercut pricing on the hotels’ own websites.

“The part that drove hoteliers crazy was that they aggressively managed their pricing — cutting rates during low-demand periods and raising them in high demand-periods — often lower and higher rates than the hotels themselves,” recalls Robert Cole of RockCheetah, a hotel consultancy. “They also offered a low price guarantee to position them as a value offering, but in reality, when they offered premium pricing during business peaks, very few travelers ever contested the rate or applied for a rebate.”

Although Getaroom offers great unpublished rates in a hotel-friendly model over the phone, the phone process doesn’t always work as advertised.

Calling the 800 number on the homepage earlier got me to the company’s Dallas call center, but when I went through the online booking process for the Lido Beach Resort in Sarasota, Florida, and phoned a different number listed on the top of the page to see if I could get an unpublished rate, the call was answered by an agent in India.

And, I was offered only the published rate, $158.96, for a room with a king bed, over the phone. There was no unpublished rate, as promised, for the property.

“I’m not sure how you got there,” Diener says. “This is an old link when we referred customers to another service for outlying areas we don’t cover.”

As Getaroom looks to the future and surveys the landscape, Diener says the company is trying to be creative and is not seeking to compete with the rest of the pack as a full-service online travel agency.

Self-funded, Getaroom is not looking for outside funding at this point, Diener says.

A private company with around 250 employees, all of whom have stock options, Diener won’t provide specific numbers, but claims Getaroom will double its sales this year, as it expands into Canada, various ski markets, and Asia-Pacific, too.

“It’s a very different mentality” than working at a $1 billion company, which can’t be as nimble, Diener says.

“The upside is much more significant than at a bigger company,” Diener says.

And, it seems that there is much more than money involved when you are a lifer in selling hotel rooms.

“People have to have passion for the business,” Diener says. “This is a business you love or you don’t.”