Sabre, based in Southlake, Texas, has hundreds of airline customers worldwide using its services for distribution and operations. By buying its once bitter rival Farelogix and its technology and engineers, Sabre said it hopes it will be able to push airlines to more quickly adopt the latest tools and methods for selling their services via online and offline travel agencies. It’s also a tacit admission that Farelogix’s technology was superior in many ways to its own.

Sabre said that the approximately 225 workers at Farelogix, headquartered in Miami, will be brought over as a wholly-owned subsidiary after the deal is closed in late 2018 or early 2019.

“When Sean Menke and Dave said that they wanted Sabre to be the world’s leader in e-commerce and retail not just for airlines but for the travel industry, they had me right there,” said Davidson. “They were clearly serious… and they realized that to reach that goal they had to look at their platform differently.”

To say that Farelogix and Sabre have been “frenemies” for many years is something of an understatement.

Farelogix has sold many products, but one that was especially popular enabled airlines, starting most prominently with Air Canada, to distribute their content directly to agencies, partly by bypassing technology middlemen like Sabre and its peers Amadeus and Travelport.

American later filed a lawsuit against Sabre for alleged bullying, and during the case it included in its testimony a Sabre PowerPoint slide that said, “Our goal is to one, not let Farelogix spread any further and number two, to discontinue the current locations.”

It cited a November 2008 statement by a Sabre executive, who internally said, “We want to make sure we’re still pushing on the strategy of shutting down Farelogix.”

Farelogix and Sabre have fought over the same customers commercially. Today Farelogix has 21 customers, including American Airlines, Qatar Airways, Delta, Emirates, Lufthansa, and Virgin Atlantic, using its services to connect directly to agencies. About a dozen of those are also Sabre customers for various services.

They’ve also snarked at each other in public forums. In the early 2000s, Sabre Holdings chairman Sam Gilliland was one of many executives at so-called global distribution systems who dismissed the rise of alternative technology players like Farelogix.

“Competitors used to falsely accuse Farelogix of selling vaporware or tech that didn’t work,” said Ellen Keszler, a consultant at Clear Sky Associates who was a board member of Farelogix between 2009 and 2017. “But to the contrary, its solutions are the clear leader in enabling innovative airlines to use the latest technologies to drive incremental revenue and product differentiation.”

In 2013, Sabre’s hostilities increased when American Airlines signed a multi-year deal to have Farelogix build a platform to let travel agencies and other partners connect directly to receive its content and in many ways bypass the middlemen of travel distribution, Sabre, Amadeus, and Travelport.

Sabre will fund the purchase of Farelogix with cash on hand and revolver borrowing, and a couple of research analysts expected a minimal impact on its earnings.

The deal poses risks, and the two most notable ones are whether Sabre will be able to retain Farelogix’s airline customers and whether the two company cultures will mesh.

Airlines currently using Farelogix, but not using Sabre as a global distribution provider, will continue to be able to do so, Shirk said.

“Today Farelogix is the leader in the market for many next-generation retailing solutions,” said Shirk. “They’re more versed in what some clients want for some solutions than we are, and so the business models they have, the agreements that are there, we are absolutely excited about supporting those.”

However, some airlines that use Farelogix to help with their direct distribution strategies may not want to continue to use Farelogix under Sabre ownership for the long run. For example, Lufthansa Group might possibly fit in this category, having engaged in recent litigation with Sabre partly over its use of Farelogix’s technology. It was not available for comment under deadline.

On the workplace front, Sabre hopes to have Farelogix’s startup culture metabolism rub off on its teams. “Bringing their DNA in can help be a catalyst to accelerate the cultural change that Sean Menke and I have been trying to drive in the company when it comes to innovation and development best practices.”

Sabre’s and Farelogix’s development shops likely have different habits and practices, and it will require a steady hand to assure the teams integrate well. Sabre’s Kathy Morgan, vice president of product management, strategic initiatives, has been one of the leaders tasked to that job.

Davidson seemed genuinely optimistic about the integration, saying that his team is eager to overcome many long-time obstacles and to dream bigger.

“When you’re two independent companies, even when you’re integrating with a single airline customer, there are boundaries and limits in how you integrate, and those go away with this deal to provide efficiencies in connectivity,” said Davidson.

“For example, several airlines use Sabre’s revenue management systems and, over time, those could be deeper linked into engines that track inventory availability,” Davidson said.

A Victory for “New Distribution”

“Part of Sabre’s renaissance is really establishing a lead on NDC-enabled solutions, and Farelogix, having been at the forefront of NDC, will help,” said Shirk.

What’s NDC, you bravely ask? A bit of brief history:

Starting around 2012, American and Farelogix developed some ways and ideas about retailing airline content that then formed a significant part of an industry-wide movement called NDC, or New Distribution Capability. While NDC originally referred to a set of technical standards, the term has since become shorthand for more sophisticated airline selling, upselling, and cross-selling.

“This is a very interesting acquisition, and it just underscores the importance of the shift towards the NDC and the corresponding ancillary retail sales that it enables,” said Skift Research senior research analyst Seth Borko.

For many years, a widely-held view by many airline executives was that Amadeus, Sabre, and Travelport’s technology for presenting content to travel management companies via desktop systems — as well as to online travel agencies — was inadequate for maximizing the full potential to upsell and cross-sell flyers.

For example, in January 2010 Air New Zealand introduced a new product called Skycouch which was a bundled sale of more than one seat. However, it wasn’t until the end of 2013 that Sabre made the technical changes to enable agents to sell it.

Airlines turned to tech vendors to plug what they saw as gaps in their distribution needs.

Farelogix was one of those vendors. The company, though founded in 1998, gained serious traction with large airlines in 2013 when it launched a software-as-a-service tool that allowed airlines to connect seat and ancillary revenue inventory to direct and indirect channels, as Skift noted in a 2017 profile of Farelogix. 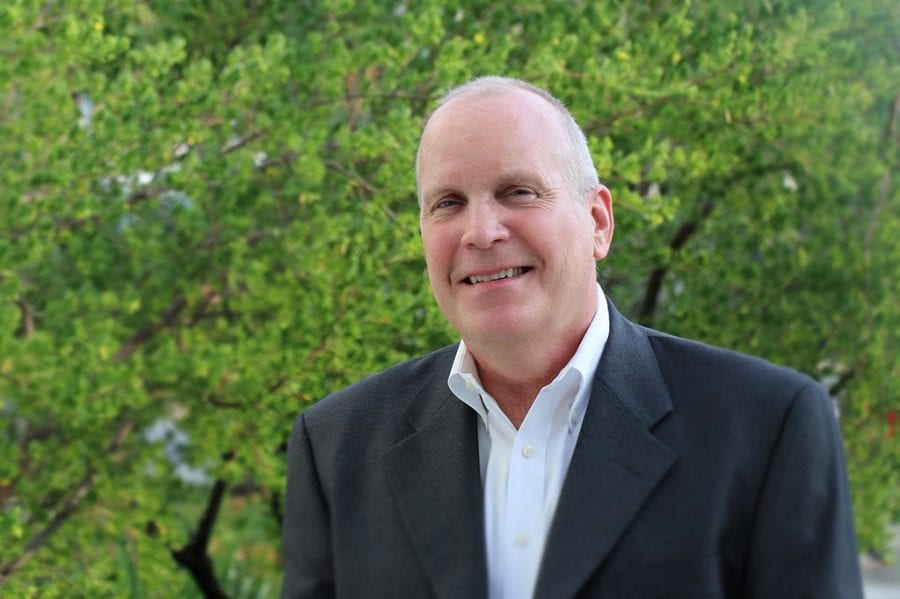 Farelogix CEO Jim Davidson is a regular on the airline conference circuit. His company helps Lufthansa and 18 other airlines with pricing, merchandising, and direct distribution. Source: Farelogix.

NOWHERE ELSE TO GO?

On Tuesday, Davidson painted the deal as a mutually beneficial arrangement. But the deal may partly be a marriage of convenience.

A decade ago, Davidson said he intended for Farelogix to become a large, global tech company. But Farelogix expects full-year 2018 revenue of only about $40 million.

The company’s work may have been too capital intensive with potential revenue gains too distant in the future to attract much outside capital.

Farelogix raised a little over $11 million in external capital, primarily in 2004 and 2005 and almost entirely from asset management firm Sandler Capital.

External capital may have proved hard to come by to fund the scaling up necessary to fuel that dream. An acquisition may have been the only way to continue to grow.

In 2017, one of Farelogix’s smaller but respected competitors, Vayant, sold to PROS (Pricing and Revenue Optimization Solutions), a cloud software company, for only $35 million in cash.

Farelogix’s other competitor most respected by airline executives is Travelfusion, an online travel content aggregator that was one of the pioneers of direct distribution tools using modern programming languages and data exchange methods. In 2015 Ctrip took a majority stake for $160 million.

By those deal comparisons, Sabre’s offer may be the best it could have gotten.

Competitors Left in the Field

As noted above, Farelogix was one of a few smaller vendors that have striven to build solutions to different parts of the distribution puzzle where airlines were dissatisfied.

Other upstart tech vendors included Travelfusion, an online travel content aggregator that was one of the pioneers of direct distribution tools using modern programming languages and data exchange methods. It links hundreds of travel suppliers, especially low-cost-carriers, to online travel agencies and online corporate bookings tools. In 2017, Travelfusion helped build a portal for International Airlines Group (IAG), the parent company of British Airways, to offer its content to agents and corporate clients.

As noted, another provider of retailing and direct distribution tools is PROS (Pricing and Revenue Optimization Solutions), a cloud software company, whose tools are also well respected among airline executives.

Other smaller players include JR Technologies, which provides booking engines, corporate booking tools, and other sales management tools to airlines, consolidators, travel agents, and tour operators. In March 2017, JR Technologies and IAG signed an agreement to cooperate on distribution-related software.

It’s likely the Farelogix name will eventually disappear a year or two after the integration, though executives offered no specifics, commitments, or timetable.

Shirk said he intends to have Farelogix’s revenue contribution and cost be reported as part of the company’s Airline IT unit but it will be run as a subsidiary until a plan for a smooth integration is worked out.

“Upon the close of this deal, we expect this will accelerate Sabre’s development of our end-to-end retailing, distribution, and fulfillment strategy for airlines,” Shirk said.

Subscribe Now
Tags: farelogix, global distribution systems, sabre, sabre airline solutions
Photo Credit: In June 2018, Sabre CEO Sean Menke spoke at Skift Tech Forum in Silicon Valley about his desire to rev up the metabolism and lead a renaissance at the travel technology giant. Sabre, a travel technology giant, has made an offer to acquire Farelogix, a travel distribution specialist in a bid to enhance airline merchandising. Skift