Chimney Rock becomes a national monument for the sake of U.S. politics Skift Take
The monument designation comes less as a sign of respect for the Pueblo Indians and more as move to win over voters in the state who have wanted the official title for some time.
— Samantha Shankman
Share
Tweet
Share
Post
Send

A dramatic rock formation in southwestern Colorado that was home to ancestors of the Pueblo Indians 1,000 years ago now has protection as a national monument — a potential boost for tourism in a state key to the presidential election. 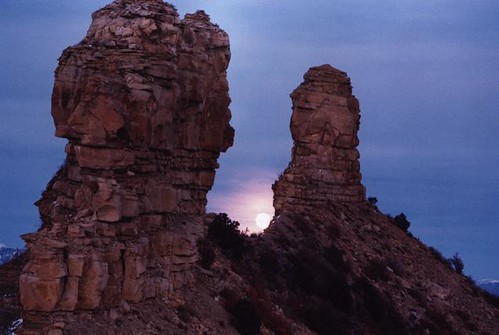 A study shows that monument designation can double a site’s economic impact. Photo by U.S. Department of Agriculture.

The designation — celebrated at the site Friday by Interior Secretary Ken Salazar, Agriculture Secretary Tom Vilsack and Democratic Sen. Michael Bennet — comes as Obama and Republican Mitt Romney intensify their battle for the presidential vote in Colorado, considered a swing state. Romney returns to Colorado on Sunday to campaign.

Yet both Democrats and Republicans — including Republican Rep. Scott Tipton, who represents southwest Colorado — had worked for years to create the monument in the San Juan National Forest west of Pagosa Springs.

“With President Obama’s action and the strong support of the Native American community and others throughout the region, this new monument will bring new economic opportunity to Archuleta County and the Four Corners region,” Vilsack said in a prepared statement.

A study commissioned by the National Trust for Historic Preservation said a monument designation could double the site’s economic impact on the region from $1.2 million today to $2.4 million by 2017.

Some presidential designations of national monuments have been strongly opposed.

President Bill Clinton’s designation of Grand Staircase-Escalante National Monument in southern Utah in 1996 angered many residents and politicians who wanted to tap underground energy deposits there. Montana ranchers and others oppose a contentious federal proposal to convert a vast swath of eastern Montana into a new national monument.

When Obama took office, some Western conservatives were suspicious his administration would go on a national monument-creating spree. Obama has designated two other national monuments: Fort Ord National Monument in California, and Fort Monroe, a former army base in Virginia that was a safe haven for slaves during the Civil War.

Ancestral Puebloan farmers in the Chimney Rock region built more than 200 homes and ceremonial buildings high above the valley floor to be near the sacred twin rock pinnacles. They inhabited the region for more than 1,000 years but had left by 1300. Their disappearance is still a mystery.

The site was designated a National Historic Landmark in 1970.