The Coveted Jet Built for the Economics of the Pandemic 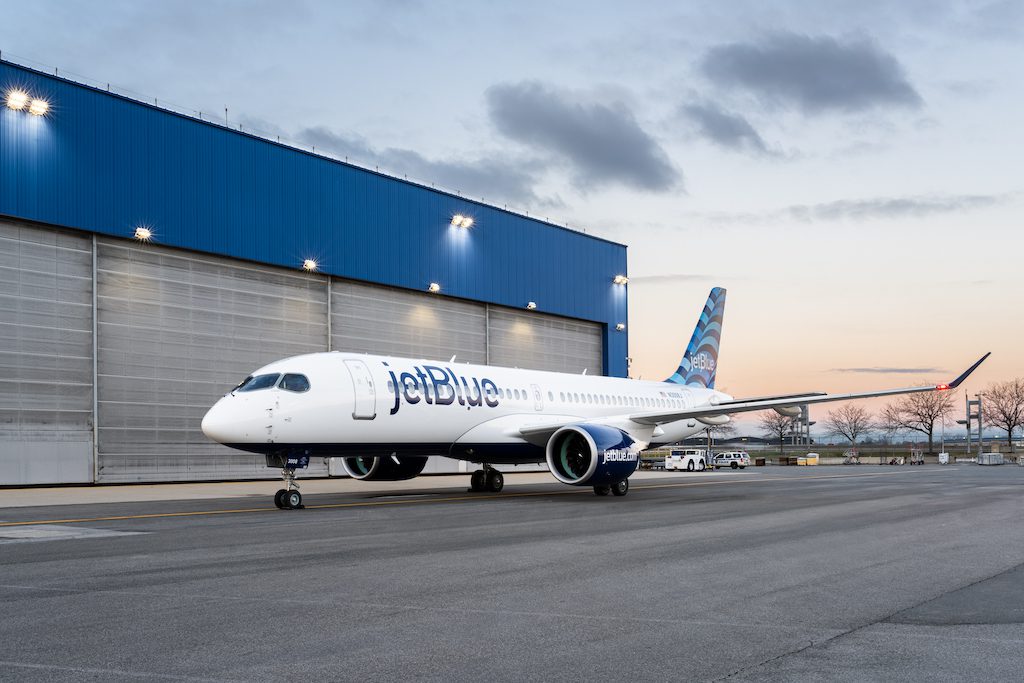 The Airbus A220 is poised to emerge strong from the coronavirus pandemic with airlines keen for its low costs and small capacity. JetBlue is the latest carrier to add the jet as it moves forward with a major fleet transition amid the crisis.

If there is an aviation wunderkind to come out of the coronavirus pandemic, it just might be the Airbus A220.

The small narrowbody jet has proven popular among airlines even as thousands of aircraft were parked amid the historic drop in air travel during the crisis. The A220s size, seating between 100- and 150-passengers, and low costs have proven a sought after elixir to industry executives looking for the lowest cost way to keep flying when every penny matters.

“The A220 was the best performing production passenger airliner,” Cirium head of valuations George Dimitroff told Skift. The jet retained more of its market value compared to other models through 2020 owing to “a combination of its right size for thinner traffic flows, lower fuel burn and trip costs.”

By December, all but 17 of the 137 A220s in service around the globe — or 12 percent of the fleet — were back in service, according to the Cirium Fleets Analyzer database. For comparison, more than 18 percent of all 737s not including the MAX and a quarter of all A320s remain stored.

This is not to say the A220 is more common than either the A320 or 737 in absolute terms. The latter two jets are the world’s most popular narrowbodies with more than 10,000 models in the air at the end of 2020.

Delta Air Lines kept all of its A220s flying even as it parked some of every other aircraft in its fleet early in the crisis. Air Canada took nearly its full allotment of the jets this year despite deep capacity cuts and the cancellation of some later deliveries. And JetBlue Airways has held steady on taking its first A220 that arrived on New Year’s Eve even as coronavirus losses mounted.

Adding a new type of plane to a fleet is no small matter for an airline. In addition to the cost of buying the aircraft, an all-new variant requires everything from training staff and preparing airports for the new jet, to making sure spare parts are in stock for the inevitable maintenance situation.

But for the latest technology plane that JetBlue sees as key to its future? That cost is worth the use of scarce cash.

The cabin of JetBlue’s first Airbus A220 is, slightly ironically, more gray than blue. From seats to the overhead bins and the walls, gray is the dominant palette. Where the airline’s namesake color stands out is on the bulkheads and in entryways where designers used the color to subtly guide passengers into the cabin.

“When you start working on an entirely new aircraft, you realize how many things you actually need to do from scratch just because the learnings are not there,” JetBlue director of product development Mariya Stoyanova told Skift on a walkthrough of the airline’s first A220-300 at New York JFK on Monday. “I don’t think we compromised on anything given the design of this aircraft.”

Amenities are the standard lot for JetBlue. They range from large personal inflight entertainment screens to power and USB ports at each seat, and free high-speed wi-fi.

But the big feature for travelers to look forward to is “space,” something that Stoyanova mentioned more than 10 times during the walkthrough. Space includes at least 32-inches of legroom — or “pitch” in airline parlance — in every row, which is at least an inch more than the industry standard. An 18.6-inch seat width that, according to Stoyanova, is more than on any other JetBlue plane. And even the overhead bins are spacious.

This space ethos is not new to JetBlue. The idea has been part of the airline’s DNA since it began flying in 2000 and continues to be part of its branding, for example the “Even More Space” extra-legroom seating option.

“We wanted to bring humanity back to air travel,” JetBlue founder David Neeleman told Guy Roz on the How I Built This podcast in 2019. The focus for him and his team at launch was to “treat people awesome,” which included offering more legroom and then-uncommon amenities like personal TV screens, and coupling them with superior customer service.

While no-longer the unique airline with personal TV screens, the space ethos continues to be part of JetBlue’s design decisions. For example on the A220, Stoyanova and her team were challenged with how to relocate emergency equipment from the overhead bins to the bulkheads in order to free up storage space for travelers. The solution was a curbed protrusion from the forward wall — dubbed “the backpack” — that met both their storage and aesthetic needs.

“We’d be like what do we do with the backpack? And everybody knew what we were talking about,” she said.

Passenger comfort was a big selling point for the A220 by its developer, the Canadian planemaker Bombardier. Born the CSeries, Airbus agreed to buy the program when it appeared a trade dispute by Boeing could result in onerous tariffs on any U.S.-bound jet. While the tariffs were ultimately rejected, the deal went through with Airbus rebranding it the A220 in July 2018.

Flyers will get to put JetBlue’s A220 to the test in a few short months. The carrier will base the jet in Boston and plans to introduce it on regular flights to Fort Lauderdale by mid-June. However, the aircraft could sub in on other flights beginning this spring.

One benefit of the new plane is its ability to open longer, less popular routes in the future. While JetBlue has yet to name any such routes, examples include Air Canada’s plans to use its A220s to launch the first-ever nonstop flights between Toronto and San Jose, California, and Montreal and Seattle. Both routes were indefinitely postponed due to Covid-19.

The new aircraft will replace JetBlue’s smaller and less efficient Embraer E190s. The E-Jets seat 100 passengers whereas the A220s seat 140 passengers, resulting in what the carrier claims is a 30% per seat cost savings. The E190s are due to leave by the middle of the decade, if not sooner.

The A220 is not entirely immune from the crisis. Air Canada cancelled 12 orders due in coming years citing the crisis and lack of aid from the Canadian government. In 2020, Airbus data shows that it lost 28 A220 orders while its A320neo program gained 56 commitments.

And the 737 Max resumed flying in December ending the more than 20 month grounding. This return allowed carriers like Alaska Airlines to commit to more of the jets for their own fleet replacement.

Fleet renewal is seen as a major theme of the crisis on Wall Street. Cowen analyst Helane Becker expects U.S. airlines to remove up to 1,000 planes from their fleets with a “focus on simplicity and increased efficiency” as they retune their operations, she wrote in a report Monday.

In North America, Air Canada, Alaska, American Airlines and Delta Air Lines have all unveiled sweeping fleet changes resulting from the pandemic. Notable for the A220 was Delta’s decision to retire its Boeing 717s as it shifts to the new generation jet.

JetBlue has maintained its orderbook for 70 A220-300s, which includes the one delivered on New Year’s Eve. That’s one plane for every E190 in its fleet plus 10 extra for good measure.

Photo credit: JetBlue is introducing the all-new A220 in the middle of the pandemic. Courtesy of JetBlue / JetBlue Airways