Why Working Remotely Is Becoming Mainstream Convincing companies to let their employees travel the world has been tough but Remote Year CEO Greg Caplan says it's getting easier as corporate travel becomes more about flexibility.

One of the most common fantasies among employees is to be able to quit their jobs and travel the world. Of course, this usually isn’t possible, and most people make do with brief vacations here and there.

The thing is, technology has made working remotely insanely easy. You can log onto Slack at any hour of the day, send emails, and join conferences via video. Traveling and working are not mutually exclusive, and the positive feelings employees get from exploring new destinations can often translate into higher productivity and less turnover.

This is something Greg Caplan, founder and CEO of Remote Year, figured out early on. His company, which just received $5 million in funding, allows professionals to travel to destinations all around the globe while still being successful in their day jobs. Sitting on the intersection of two major trends — bleisure and remote work — Caplan is seeing his company grow.

If you have any feedback about the newsletter or news tips, feel free to reach out via email at [email protected] or tweet @ikcarey. 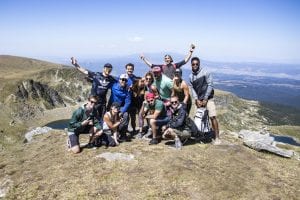 Remote Year Founder Talks About Taking Corp Travel to a Whole New Level: Remote Year flips the average business trip on its head, making it more about the destination rather than the nature of the work itself. As flexibility becomes more important for business travelers, the company sees increasing interest from employees and managers alike.

Amadeus and Sabre Sign Up for New Approach to Flight Selling: New deals mean that offline and online travel agencies will more quickly and commonly see richly descriptive details about what any given airfare includes, such as facts about legroom and photos of premium class seats. But don’t hold your breath in anticipation.

Brexit Uncertainty Weighs on Premier Inn Owner Whitbread: While most economic forecasts think that leaving the European Union will be bad for the United Kingdom, uncertainty over how, when, or even if, Brexit occurs is doing plenty of damage at the moment.

IHG Expects to Prosper Even If the Global Economy Tanks: A slowdown is coming — we don’t know when and it probably won’t be at the same scale as 2008 — but it will happen. A bullish IHG claims its business and its model makes it well-placed to ride out the storm.

JetBlue Airways Pulls Back to Regroup on Latin America and Caribbean Strategy: It isn’t easy being in the aviation business, but airlines have one advantage over a traditional company. Their assets are mobile. If a carrier like JetBlue discovers softness in one region, it can move its airplanes elsewhere.