The Growth and Democratization of Flying Private Any luxury industry experiencing an uptick in new, affluent young customers has a right to be bullish about growth, but it is a combination of logistics, customer service and branding that will eventually set the winners apart from the other players.

The shifting prioritization from ownership to access is shaking up traditional luxury markets, including second homes, yachts and now private jets.

Private jets have a reputation of an elite mode of transportation intended for those in positions of power, needing top security or with no time to waste waiting for scheduled business class flights. The last decade, however, has seen the democratization of private aviation with the introduction and growth of new networks, platforms and services making private jets, or at least a seat onboard one, accessible to the masses.

The first mover and most established network in the North American market is Berkshire Hathaway-owned NetJets which launched in the 1990s and continues to sell part ownership or fractional jet ownership and pay-by-the-hour travel to executives and celebrities.

In Europe, the largest independent private jet broker is LunaJets which operates on an on-demand charter model.

XOJet and Jettly are leaders among the on-demand private aviation booking platforms while Jetsmarter and Blade have apps that offer shared flights services with only a few taps. Sentient Jet created the industry’s first private jet card, which allows customers to buy a set number of hours on private jets with flights available with just 10 hours of notice. The options for jet cards has since exploded in recent years.

And all this is just a handful of the players with a foothold in North America and Europe. 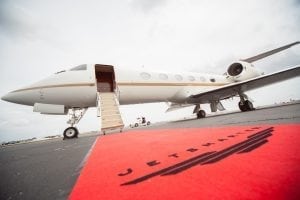 This shift from ownership to access is not unique to private aviation. Luxury as a whole has seen a rise in the share-and-rental economy among affluent travelers as Skift has reported on in the past.

“Bragging rights have shifted from I own a jet, a villa, a yacht to I have saved millions by renting these luxuries when I need them, and I have more flexibility and fewer headaches,” said XOJet CEO Brad Stewart.

“The on-demand or sharing economy drives system efficiencies and for luxury consumers this means greater accessibility at lower price thresholds, which makes these products and services available to a broader market cohort,” added James Henderson, XOJet’s president of commercial operations.

The private aviation market is particularly primed for growth, appealing to business and leisure travelers at different times of the year.

For example, the majority, or 70 percent, of Jettly’s customers fly for business while 30 percent fly for leisure. Although the average age of its fliers is 41 years old, the platform is experiencing a dramatic uptick in millennial customers.

Perhaps most notable, however, is that 60 percent of Jettly’s customers flying for personal or leisure have never flown on a private aircraft.

While Jettly CEO Justin Crabbe’s claim to “truly change the way people fly worldwide” might see bombastic, it is this growth of first-time private fliers and their relatively young age that makes the private jet market so compelling right now.

In respect to age, Blade has done the most to stand apart for a millennial market, using design and branding to build a lifestyle brand in addition to a transportation service.

The average age of its customer base is 38 years old and 45 percent female but the average age falls to 24 for its lower cost millennial heritage brand Montauk Sky, which takes weekend warriors from Manhattan to Montauk for $345 each way.

“Blade always tells a story, from its app design and booking, to the design of our lounges, the outfits for our customer experience team, and our flight attendants on the Blade one jet. In fact, there are 10-12 posts to social media posts created by our fliers for every flight launched,” said Blade spokesperson Simon McLaren.

The demands of this youthful and affluent customer base are high, making customer service surrounding the flight as important as the flight itself.

For example, if a Blade flight is cancelled due to inclement weather, customers are provided transportation in Porsche as part of Blade’s all-weather guarantee.

Although luxury travelers’ appetite for the sharing economy has increased, challenges remain.

The most significant being scale, interchangeability and reliability that can provide a network effect and operating efficiencies that create value for the client, said XOJet’s Henderson.

While it is pleasant to imagine a future of seamless on-demand private flights, or as Crabbe explains, “a future of flying where all flights are flown through a network of private peer-to-peer air operators while the commercial airlines are still stuck to traditional “hub and spoke” routings to reduce costs” — it is a future unlikely to happen.

As Skift Business of Loyalty Editor Grant Martin concluded last month, “Traditional air carriers, routes, and loyalty programs exist the way they do for one big reason — they work.” This was in response to news that membership-based airline Surf Air faces $3.1 million lawsuit for unpaid flight services.

Another challenge is access to the most efficient locations within cities. To amend this, Blade’s team in particular has its sights set on the introduction of next-generation electric aircraft.

“The quieter aircraft will open the possibilities of having more places to land intra-city, enhancing the convenience of urban air mobility and increasing the addressable market on a city-by-city basis. The number one impediment to opening skyports is the impact the noise footprint of the aircraft that land there have on commercial and residential neighbors,” said McLaren.