Disney Cruises Have Big Fans Who Don’t Bring Along Children 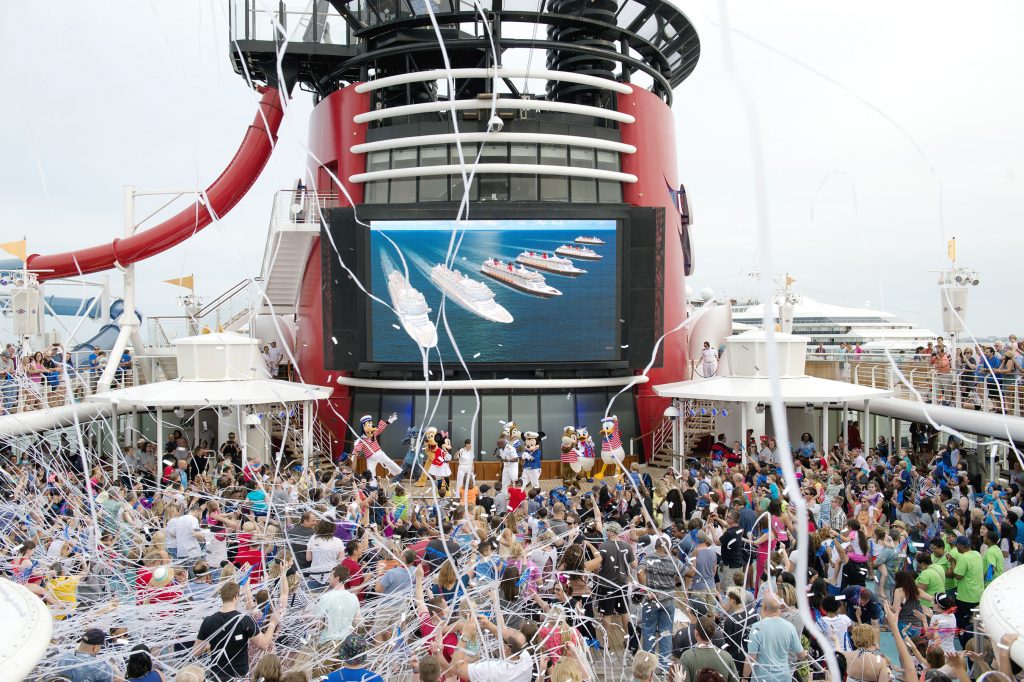 Their obsession started in 2000, when a customer told them about the cruise line. They had already taken the kids to Walt Disney World and thought it would be a fun family vacation—their kids were 13 and 14 at the time. But John wasn’t so sure. As Joanne recalls, “He took his pointer finger and shook it at me and went, ‘If I don’t have a good time, this is all your fault.’ ” Much to John’s surprise, they got hooked, sometimes taking their kids along for the ride, but sometimes not.

Now they often leave their kids in charge of the kielbasa shop and book back-to-back sailings, staying on a Disney ship for 20 days or more. “We don’t even care where we go with them anymore. We just open the brochure, book, and go,” said John, 54. “We’d do more if we could get the time off.”

The Gerritys are not alone. According to the industry website CruiseCritic.com—which is like TripAdvisor for seafarers—Disney Cruise Line gets higher average ratings from passengers without children than from those with them. (The company is immensely popular with both demographics.)

On the cusp of its 20th year of sailing, Disney Cruise Line has been around long enough to have megafans—even if kids who grew up sailing with the company have yet to get their first job out of college. So why do grown-ups have such a soft spot for Disney Cruise Line? “Quality. The quality is there, the food, the cleanliness,” said John. “The crew,” added Joanne, 53. “They are so friendly.”

Disney currently runs four cruise ships, and three more vessels are on the way between 2021 and 2023. With an eventual total capacity of more than 21,000 passengers among the seven vessels—each carries between 2,700 and 4,000 tourists—the company is thinking beyond any one demographic. Industry insiders estimate about a fifth of adult passengers come onboard the ships without children, and they are a growing presence, especially on sailings in mid-September when children are recently back in school.

The first ship, the 2,700-passenger Disney Magic, debuted in 1998 with a unique family focus: It promised everything from extensive kids’ programming to a dining scheme that allows you to eat in a different restaurant every night (so that youngsters don’t get bored), but with the same waitstaff for familiarity.

Disney’s strength, however, is catering to all members of the family—and therefore all ages, according to Ozer Balli, the line’s vice president of hotel operations. Several ship features are designed to give parents time off, such as an adults-only pool, upscale spas, nightclubs, romantic restaurants, and after-hours lounges such as the popular Champagne bar Pink on the 4,000-passenger Disney Dream. But they play well with other grown-ups, too.

Select “Port Adventures” are reserved for adults, such as a Bacardi rum tour in San Juan, Puerto Rico. On Castaway Cay, Disney’s pristine private Bahamas island, a patch of beach is reserved for those aged 18 and up, and a 5-kilometer run is popular with adults. Others are attracted by the tug-at-your-heartstrings, Disney-centric musicals or the first-run movie showings in digital 3-D. Some even say they’re in it for appearances by characters such as Disney princesses, superheroes, and, of course, Mickey and Minnie Mouse.

“The character meet-and-greets are great because the lines are generally shorter than in the parks,” said Heidi Leppert, 35, who lives near San Diego, frequents Disneyland, and recently took her first Disney cruise. “So if you want to get your picture taken with Mickey or Minnie, you may only have to wait in line for 10 minutes.” Her husband, Jason Leppert, 33, founding editor of the website PopularCruising.com, has now sailed with Disney 10 times and is a fan of the AquaDuck water coaster on the Disney Dream and its sister ship Disney Fantasy.

But wait. How are Disney cruises relaxing when you’re surrounded by hundreds if not thousands of screaming kids?

“We get asked that question,” said Joanne Gerrity. “Neither of us is bothered by them. It’s not the kid anyway—it’s the parent who’s the problem.” John, her husband, added, “On Disney Cruise Line, the children are generally better behaved than they are on some of the other lines. I think they are more content with the kids’ program.”

There are also kids-only and adults-only areas. “They keep them separate,” said John. “We don’t find we have any trouble with that; probably not as much as anywhere else you’d go, like in a public restaurant.” Plus, the Gerritys don’t drink alcohol and don’t care that there ’s no casino onboard Disney ships. Typically they ’re in bed by 10 p.m.

Joanne added that she and John enjoy watching interactions between the crew and the kids onboard, especially in the dining rooms. “They come along and cut their food. They hug them. It’s really warm to watch that,” she said.

“What I usually tell people is if you’re an adult and the idea of going to the parks is horrible to you, then you might not like the Disney cruise,” said Heidi Leppert, the lover of character meet-and-greets. “It’s going to be in the same genre.” But if you want to get that feeling of stepping on the ship and feeling like a kid again, the same way you do when you ’re going to the parks, then a Disney cruise is great.

“There’s a subculture of adults who, like us, have these great feelings about going to Disney,” she said.

That includes David and Laura Valovcin. After petting snow dog puppies in Skagway, Alaska, the pair were about to try their hand at gold panning on a shore excursion off the 2,700-passenger Disney Wonder.

“We’re big kids when it comes to this,” said David, 40, who works in information technology for Nasdaq. On his third Disney cruise, he was sporting a Donald Duck T-shirt and cap.

“We’re Disney fans,” said Laura, 37, a schoolteacher on her fifth sailing with Disney Cruise Line. “We also visit the parks at least once a year, and I think we just love the experiences they offer.”

Among the experiences the Lepperts and Valovcins would recognize from the parks are giant smoked turkey legs, served on Pirates in the Caribbean night. The show after dinner would ring a bell, too: a lively deck party comes with fireworks and an appearance by Jack Sparrow and Captain Hook. While kids may don hats and eye patches, some adult passengers go in full pirate regalia. “It’s fun to watch,” Heidi said.

Even among premium cruise lines, Disney claims some of the industry’s highest ratings. It’s consistently lauded for quality and attention to detail, said Colleen McDaniel, senior executive editor of Cruise Critic. In February, the website’s 2017 Cruisers’ Choice Awards honored Disney with eight first-place honors—outranking traditionally high-end brands such as Celebrity and Princess cruises in the mid-sized and large ships categories, and taking top nods for its shore excursions, service, and cabins, among other things.

Innovative adult programming, McDaniel noted, takes place both on the Disney ships and off, but conceded that Disney fans are likely to have the most fun among passengers on the ships: “You can’t escape the Disney elements onboard—Mickey, the princesses, the movie-themed entertainment—but why would you want to?

As they ready for their 100th voyage, the Gerritys certainly have no desire to sidestep the Disney magic. After one particularly memorable cruise, when the high school sweethearts celebrated their 25th wedding anniversary, John had a tattoo inked on his upper right arm featuring the cruise line’s red, white, and blue logo, complete with Mickey Mouse head.

“I said to Joanne, ‘What can we do to thank the crew?’ There ’s just so many of them you can’t give them anything. Then I was watching a TV show about the military guys getting tattoos for their units and I thought, ‘There you go.’”

With an admitted aversion to needles, John said he’s nonetheless happy he got the tattoo. “Everybody wants to take a picture with it,” he said. “It’s a big hit.

This article was written by Fran Golden from Bloomberg and was legally licensed through the NewsCred publisher network. Please direct all licensing questions to legal@newscred.com.