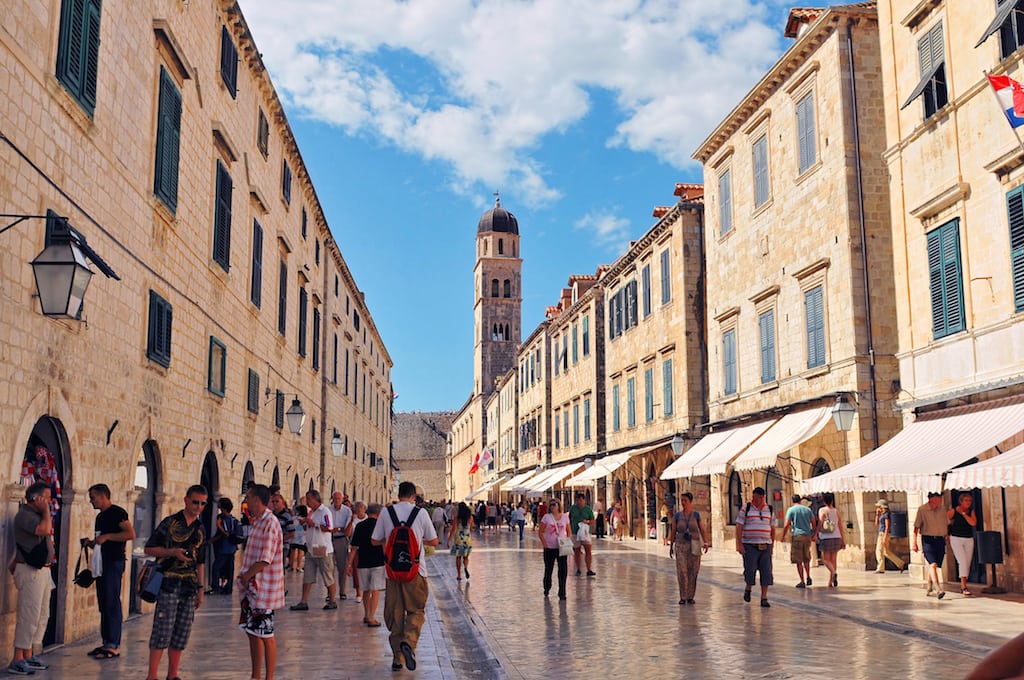 Skift Take
Everyone comes for the old city, but development restrictions need to be loosened so that the city does not turn into a set that only tourists and film crews love.
— Jason Clampet
Share
Tweet
Share
Post
Send

With Dubrovnik’s medieval promenade choked with floodlights, camera booms and a downed spaceship parked against a stone pillar, Desiree and Roger Hamilton had to dine in a more mundane corner of the 1,400-year-old city.

Walt Disney Co.was filming the eighth installment of the “Star Wars” series in the center of the Croatian port, which also has played King’s Landing in HBO’s “Game of Thrones.” For a week this month, visitors were shunted off the Stradun, the central avenue of stone houses, as stagehands lugged blue crates on cobbled walkways and electricians snaked thick cables past outdoor cafes on the Mediterranean squares.

“The city looks like a stage in Disneyland, and it would be devastating if it becomes just that — a stage,” said Desiree Hamilton, after she and her husband, both Britons living in Pennsylvania, gulped down a bland tourist meal in the cramped bistro. “It’s been spoiled by the movie shooting. It certainly spoils it for tourists who want to see the city.”

As Croatia’s most-photographed tourist resort prepares for the summer season, Mayor Andro Vlahusic is pushing the walled city as a living stage for film and television productions. Some city officials, property experts and locals say that the strategy may be working too well. The very tourists who come because of the films have to fight for lodging and space, threatening to overrun the infrastructure and the local hotel industry.

For Croatia, tourism in cities like Dubrovnik, which was bombed and under siege during the 1991 war for independence from Yugoslavia, will help secure stable economic growth after a six-year-recession ended last year. The European Union’s newest member is betting that western tourists will choose Croatia and its 5,800 kilometers (3,600 miles) of seashore over resorts in the Middle East and northern Africa because of safety concerns.

“You don’t have to set a stage in Croatia, as it has natural beauty, natural history,” Croatian Prime Minister Tihomir Oreskovic said in an interview. “Our role is to further enhance what the country already has to offer and to further elevate global interest in Croatia.”

The city is trying to catch up. Outside the walled-in center, a new electrical substation is beginning operations and a concession has been awarded to develop a cruise-ship port in nearby Gruz. The Belvedere Hotel, owned by Russian billionaire Viktor Vekselberg, is slated for reconstruction, as is the abandoned Kupari bay resort. Both are being developed jointly by Russia’s Avenue Group and the Ritz-Carlton chain.

But that may be too little, too late for a city that is sandwiched between tall scrub hills and the rolling Adriatic Sea. And rooms and apartments rented out by locals living within and outside the thick stone walls can’t meet all the demand.

Dubrovnik Tourist Organization official Eta Lovic said the city’s hotels and rooms have been booked solid every season for the past few years and “tourists always ask us to find them that one free room that we don’t have.”

At the same time, development inside the historic center is hampered by a law forbidding new construction above the old town that can be seen from within the walls. Any renovations in the UNESCO-protected downtown are strictly scrutinized by city and regional officials and there is no guarantee of approval.

“Tourism is booming and there’s still potential to grow, but the question is how long the city will be able to cope,” said Kieran Kelleher, the director of Dream Estates Croatia, a division of Savills, the London-based real-estate firm.

Mayor Vlahusic, a medical doctor and former health minister, decided to promote Dubrovnik through film and television when he took over city hall seven years ago. He offered use of the old town for free to HBO for “Game of Thrones,” counting on the tax revenue derived from hospitality for the city coffers.

He extended the same offer to Disney unit Lucasfilm when he negotiated with it, he said. Disney and Lucasfilm didn’t respond to requests for comment.

The resulting wave of tourism — and tourist-related revenue — should give city officials the cash needed to keep Dubrovnik preserved and let it invest in museums and exhibitions, Vlahusic said as he sauntered past tourists gawking at “Star Wars” props.

“We want to be a living city, not an abandoned town,” said Vlahusic. “We must respect our heritage, but we should also fill it with entertainment.”

But that may not be enough.

“We are not against the filming, but we are against a chaotic approach,” both in film planning and the long-term vision of tourist growth, said Ivan Vidjen, a member of both the city council and a local conservationist group. “You have to wonder when enough is enough.”

Gina Pecotic, a local pastry chef, doesn’t ask herself that question. She’s played a peasant, a spice seller, and a lady-in-waiting in “Game of Thrones.” During a recent personal tour, she showed off filming locations including winding alleys along the stone walls and the stairs where the queen of King’s Landing walked unclothed.

“I wish we knew how to use the popularity,” Pecotic said as she watched “Star Wars” stagehands push equipment past the central coffeehouse. “This is a new future.”

–With assistance from Peter Laca and Christopher Palmeri.

This article was written by James M. Gomez and Jasmina Kuzmanovic from Bloomberg and was legally licensed through the NewsCred publisher network.

FREE REPORT: The Rise of Destination Marketing Through Movies and TV