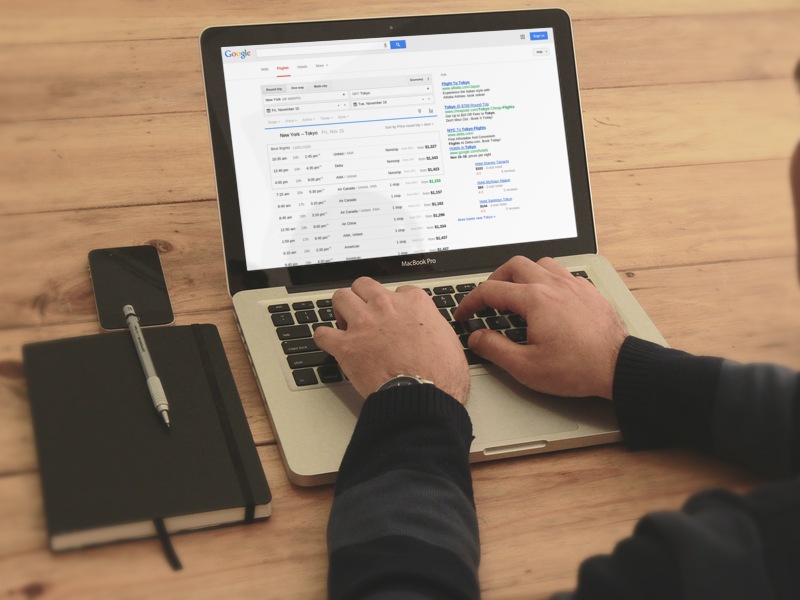 Google is already the dominant player in travel advertising but now, after four years of acquisitions and product development, the search giant is finally integrating its flight and hotel products and becoming the booking power some feared.

Earlier this season we released a report in the Skift Trends series, Deep Dive Into Google’s Travel Ambitions.

Below is an excerpt.

Oliver Heckmann, a Google vet of nine years, took the helm of the 850-person Google Flights and Hotel Ads product teams in the fall of 2014. Heckmann gave an exclusive interview to Skift from Google’s Mountain View, California headquarters prior to the launch of Google’s new vacation-destination search in late 2015.

The new feature integrates flight and hotel recommendations on smartphones in a way that Google hasn’t done before. Heckmann detailed Google’s travel strategy, including for its new Book on Google functionality and Hotel Ads Commission Program.

An excerpt of that interview is below. Subscribe or purchase the report for full access to the interview and other exclusive insights on Google Travel from industry experts.

Skift: What’s ahead for Google Travel? As you know, you guys are already Google but does upper management say to you, “Hey, let’s take this thing forward. We want to be the next Booking.com or the next Expedia in travel?”

Heckmann: No, it’s quite different than that. We have a couple of things coming together nicely now. I mean Google flight search, Google hotel search and Hotel Ads. Those are kind of the basic building blocks that we’ve been working on in the last year, so we’re very happy with how they’ve turned out. Flight search is still doubling [its] user base every year for years in a row. We’re working with our partners so, we’ve increased the number of clicks that we send to partners by 250 percent in the last year.

Skift: Right, but it’s still relatively small in the ecosystem.

Heckmann: It has become quite significant in the ecosystem. When we talk to airlines, they take us seriously now. We have some numbers that make us quite proud.

Skift: What has made the numbers increase? Is it just the quality of what you’re doing or something else?

Heckmann: The flight search team has a strong focus on what’s good for the user. It is one of the strongest user-focused teams that we have. We’re doing a number of things differently than the rest of the industry. First of all it’s easy to use, tremendously fast, we put an insane amount of effort in making it comprehensive and having the best possible data set that we can have in there. There have been a number of technical innovations that we’ve been driving. Some of them were needed to make it really fast, but we’re also basically trying to predict what users would normally do and want and execute, all of that.

Skift: What’s the latest on Book on Google? How is that progressing?

Heckmann: Book on Google is actually a big and important thing. So if you take a step back, one trend that we see across all of Google when we look back across all verticals, including travel, but not exclusively to travel, is a shift to mobile. Everybody is on his or her phone all the time. Whether they’re standing in the supermarket, they’re sitting at their sofa at home, in a restaurant, in the bathroom, wherever. People are on their phone all the time so there are multiple changes.

The obvious change was screen sizes are small, it’s harder to type stuff. The not-so-obvious thing is actually the session lengths have changed. In the past I might have done travel planning at home in front of my desktop computer the whole evening, or a full day on the weekend to plan everything. That’s happening less and less. It’s increasingly happening in what we call micro moments, small moments of time in between. There are many more of them, naturally, but they’re so much shorter.

Skift: Are these micro moments stretched out over more days?

Heckmann: It’s stretched out over many months. It depends exactly on the trip, not necessarily if I have to fly next week on a business trip, then it’s not going to be stretched out over months. We see micro sessions continuing on the same macro tasks over more than two months, for example. So that’s an effect and it’s a big change. It’s also a great opportunity because there are so many of these micro moments where an advertiser can kind of reach a user at the right time.

The small screen sizes don’t lend themselves to having 20 tabs open and explore all the flexibility that at least a leisure traveler typically has when traveling. “Oh I could go first week of August, I could fly on Monday, and I could fly on Friday, Saturday, and Sunday,” all of that is possible. On a desktop you might have opened 20 tabs and explored the small subset. On a phone that’s very hard to do.

Let’s assume you do that and you find something. Now you want to book the ticket. I’m a leisure traveler. I don’t remember the password I needed two years ago when I flew with JetBlue. You have to sign up for that, recover the password, and figure out how copy and paste works on the device. Go to the email program, copy the temporary password there, set up the new one. I’m pretty sure many users will be lost and not convert in that moment.

That’s why we introduced Book on Google for flights and hotels, and as the micro moment spins so we’re doing this in other areas as well. For example, in Shopping it’s called Buy on Google but it’s the same thing. We allow you to basically convert directly on Google, saving you clicks. The additional advantage is you’re more likely to actually have your payment credentials set up with Google.

We want the airline, or the hotel, or the online travel agency to own the customer relationship. They’ll be sending the email to the user, they get the email address, credit card information and all of it. They own the customer relationship. The difference is the conversion happens on a Google-hosted page instead of a seller-hosted page, and the advantage of that is it’s easier to convert. Fewer clicks, more likelihood of payment with entry setup.

Photo credit: Searching for a flight on Google Flight Search. PlaceIt by Breezi