Skift Take
We constantly wonder how many of the TSA’s problems could be solved if they treated the employees better and were able to retain more qualified, competent workers.
— Grant Martin
Share
Tweet
Share
Post
Send

Happy new year business travelers. While you were spending time with your loved ones over the holidays, the Transportation Security Agency was updating its policy on checkpoint body scans, making it mandatory — at their discretion — to participate. This means that if you were the opt-out sort of person before and if agency disagrees they can force you to take the scan. Or miss your flight.

Details and reach of the update are still a bit sketchy, but it seems to be aimed at a tiny fraction of travelers that the TSA urgently wants to scan. For most people, the option to opt-out should still be in place.

Still, it’s a curious amendment to make to a rule with not a lot of details surrounding it. Hugo Martin over at the Los Angeles Times has the full details.

.@RepPeteKing on @TSA making body scanners mandatory: Too much has gotten through. Inspections have not been effective enough. 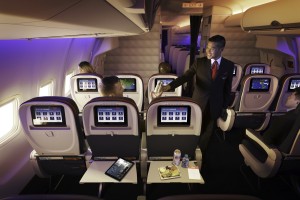 Etihad Dealt Defeat on Air Berlin Code-Shares by German Court: A German court has ruled that Etihad Airways and Air Berlin can’t continue code-sharing on some of their routes beyond mid-January. Read more at Skift

Delta Is Out-Innovating All Other Airlines With Its Branded Fares: Airline marketing and ancillary revenue consultancy Ideaworks has announced its list of the top five airline marketing innovators for 2015, and listed Delta as the industry’s best at building revenue through ancillary sales, including its “branded fares” and Comfort+ product. Read more at Skift

How the World’s 30 Best Airline Brands Ranked With Consumers This Year: Brand Finance released its report of the Top 30 airline brands for 2015 in February of this year, as a sub-set of its report on the most powerful brands in the world. While the market numbers behind these rankings are sound, we wanted to see how well these elite airlines improved their connections with consumers over the year. Read more at Skift

NYC Airport Lounges Are Finally Improving: New clubs and renovated facilities are cropping up in a bid to get more of us to upgrade out of coach. Read more at Conde Nast Traveler

TSA threatens to stop accepting driver’s licenses from nine states as of Jan 10: When Congress passed the 2005 Real ID act — mandating easy sharing (and intrinsic insecurity) — of driver’s license data, they insisted compliance by states with the rules would be voluntary. Read more at BoingBoing

Video: Why Restaurants Foretell the Next Tech Disruption in Travel: Greg Hong, CEO and co-founder, spoke at the Skift Global Forum. Hong’s talk on “Why Dining is The Next Frontier of Disruption in Travel” explored the ways in which technology can improve the dining experience. Read more at Skift

What 10 Travel Brand CEOs Said About Personalization in 2015: Most travel brands saw their industry with tunnel vision this year through the ambient ‘authentic,’ ‘millennials’ and ‘personalization’ catch phrases as marketing campaigns rolled out, flights and hotels were at capacity and some destinations welcomed a record number of visitors. Read more at Skift Predicting the Rise of the Smart Hotel in 2016: For those of us who cover the hospitality industry, we hit a plateau in 2015 with the dismissal of Starwood Hotels CEO Frits van Paasschen, followed by Marriott gobbling up the 1,200 Starwood hotels in the hotel merger of the century in November. Read more at Skift

Millennials to Hotels: Stop Trying So Hard! As a Millennial, I’m here to say you don’t have to woo us with your in-room acoustic guitars. Yes, the Freehand Chicago has cute Crosley radios in its rooms, but I was more excited by the bedside outlet where I could charge my phone while it rested on the nightstand. It turns out we’re not that different from our parents. Just don’t skimp on the free Wi-Fi. Read more at Conde Nast Traveler

A review of the new Times Square Señor Frogs, for your enjoyment.