Delta’s on-time performance has been so smoking hot over the last few years that it’s employees are starting to program their watches by it. The airline has become so confident in their operations that it’s now offering a guarantee to business travelers on corporate contracts: If it falls behind American and United, it’ll refund a portion of its fares.

It’s a clever tactic to pull in more contracts, and right in line with Delta’s strategy to cater to (high spend) business travelers.

But will traveling customers see any direct benefit? Most likely they’ll see the long-term benefit of better competition over on-time performance. Those affected by the refunds, however, will probably only earn credits on behalf of their employers.

Pax on my UA flight, after four drinks (on phone): “We went via South America.” (We were 14mins late.)

Interview: Ryanair’s CEO on Trans-Atlantic Service, In-Flight Wi-Fi and Unbundling: Ryanair CEO Michael O’Leary addressed the press in Copenhagen yesterday to announce 15 new routes to Europe out of the Danish capital, despite the airline’s ongoing dispute with Danish labor unions, which forced Ryanair to close its bases in at Copenhagen and Billund airports. Read more at Skift

Aeroflot to Gobble Up Its Russian Regional Rival Transaero: Russia’s second-largest passenger airline, the struggling Transaero, will be taken over by the country’s top carrier, Aeroflot. Read more at Skift

Delta to Pay Business Travel Clients If On-Time Arrivals Don’t Beat American, United: Basking in an on-time rate that beats rivals, Delta Air Lines Inc. promises to pay up if it can’t get road warriors to their destinations more reliably than American and United. Read more at Skift Virgin America Can’t Come Up With Enough Flights for Its New Gates in Dallas: Virgin America has little love right now for Love Field. Doing business at the small Dallas airport has posed a struggle for the airline since relocating there last fall. The airport has 20 gates, and Southwest controls 18. Virgin America hasn’t figured out how to launch enough flights from its two gates. Read more at Skift

10 Hacks for Making Airport Food More Tolerable and Affordable: It turns out that there is a lot you can do to make fast food healthier, less expensive and definitely less boring. Read more at Frugal Travel Guy

Technology Giving Growing Asian Airports an Edge Over Older Rivals: As passenger numbers continue to rise, airports around the world are challenged to meet demand. Read more at Skift In-Flight Calling Should Be Up to Airlines Says U.S. Transportation Department: Airlines should be able to decide whether passengers can make phone calls during flights, a committee told U.S. regulators weighing the issue. Read more at Skift

Airplane Seat Size, Hotel Fees Should Be Disclosed Up-Front, Fed Panel Says: A federal panel says airlines should clearly disclose the cost of change and cancellation fees, as well as the size of the plane’s seats, before a passenger buys a ticket. Read more at Skift

The Smart Travel Jacket That Has Raised $7.2 Million and Counting on Kickstarter: If someone decided to bury a time capsule to capture the essence of air travel during the 2010s, they might want to include the Baubax Travel Jacket, with its nine utility pockets for an iPad, portable charger, mobile phone, drink, sunglasses, and passport holder, as well as a built-in inflatable neck pillow and eye mask. Read more at Skift

Announcing: The Winners of Skifties 2015 Social Media Awards for Travel Brands: In this second year it is important to recognize travel brands that have turned social media interactions into quantifiable business objectives. Skift acknowledges this shift from social media’s early purpose of acquisitions and interactions to drivers of awareness, consideration, and conversions. Read more at Skift 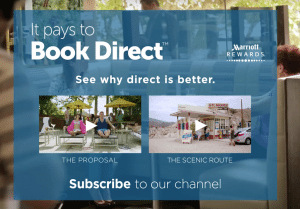 Hotels Unbundled: The 52 Startups Marriott and Hilton Should Be Watching:The hotel industry has undergone major shifts in the last decade thanks to tech, due to the rise of online travel reservation portals and distributed hospitality platforms, like HomeAway and Airbnb. Read more at Skift

Hotels Fight Back Against Sites Like Expedia and Priceline: For years, travelers have been drawn to online sites like Expedia, Travelocity, Orbitz and Priceline to find and reserve hotel rooms, flights and rental cars. Read more at The New York Times

Hilton’s New Partnership With Uber Will Extend Into Its Loyalty App: Hilton is hailing the ride sharing service Uber to help guests reach its hotels and then explore the city where they are staying. Read more at Skift

What the On-Demand Economy Is Teaching Us About Hotel Bookings: Regardless of technology, hotel guests can still book rooms in a roughly on-demand way by simply walking up to a property’s reservation desk, calling into the hotel or using a website offered by either the hotel or a third-party online ticketing agency or the like. Read more at Skift