I used to love Frontier Airlines. Service was great. The in-cabin experience was unique. There were critters on the tail of each airplane. But something happened to the airline in the last few years. Whether the legacy carriers forced it out of the business or the airline was lured in by the profits of Spirit, Frontier adopted an ultra-low-cost model, driving fees through the roof and customer sentiment through the floor. And while that general style of business may work for Spirit, customers weren’t having it with Frontier. Everyone suffered. Frontier fell out of favor. Plagued with customer complaints, Frontier’s CEO stepped down last week.

Can the airline survive this worst of times? Perhaps, but it may first need to rebuild its relationship with its customers and its staff.

@denbizjournal it was time for a change…Frontier is not in a good spot. Denver no longer supports the once beloved company.

U.S. Airlines Issue Report That Argues Gulf Rivals Are Doing a Great Job: Persian Gulf carriers expanding rapidly in the U.S. are diverting passengers from Delta, American and United instead of attracting new travelers as they have said, according to a study by a group representing the U.S. airlines. Read more at Skift

Interview: Flush With Profits, Delta CEO Is a Portrait of Optimism: Delta Air Lines CEO Richard Anderson leans back in his chair, smiles and explains why he’s so happy. Read more at Skift

Frontier Airlines CEO Resigns After Customer Complaints Rise: The CEO of Frontier Airlines resigned and was replaced by the carrier’s chairman and president, who vowed to improve a record of frequent flight delays and customer complaints. Read more at Skift

United’s Improvements Could Make LAX One of the World’s Priciest Airports: As part of a new image campaign that includes the beta release of a new website with a mood setting, United Airlines has announced that it will spend more than half a billion dollars ($573 million) to refresh “virtually all” of its customer-facing spaces at Los Angeles Airport (LAX). Read more at Skift

Hertz Raises Rates and Will Close 200 Locations: Hertz Global Holdings Inc. and Avis Budget Group Inc. rose after Hertz said it’s raising prices by as much as $5 a day in June in expectation of a busy summer travel season. Read more at Skift

Spanish Airports Adding Free and Unlimited Wi-Fi Access for Passengers: Spain’s airport authority says it will start providing free and unlimited Wi-Fi in 46 airports across the country by the end of the year. Read more at Skift The World’s Best Surfers Want to Teach You About Airline Safety: Air New Zealand continues to be a leader in airlines’ growing fight for the best safety video. Read more at Skift 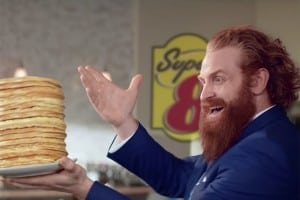 Midwest Hotel Hopes to Set An Example in Fight Against Sex Trafficking: Hotel workers in the Omaha area are undergoing training on how to spot women and minors being forced into prostitution. Read more at Skift

Wyndham’s New Loyalty Program Puts Focus on High-End Rewards: Think of any hotel loyalty program off the top of your head and chances are that you’ll come up with either Hilton, Marriott, Hyatt or Starwood, four of the behemoths in the industry. They’re popular for a reason: They’ve got award-winning loyalty programs with cobranded credit cards and they have a wide spectrum of hotels all over the United States. But is there space for another player within that scrum? Wyndham thinks so, and it is retooling its loyalty program to prove it. Read more at Skift

Reddit is putting together a solid aid package together to help out in Nepal. Donate here.

Subscribe Now
Tags: skift business newsletter, skift business traveler
Photo Credit: The CEO of Frontier Airlines resigned and was replaced by the carrier’s chairman and president, who vowed to improve a record of frequent flight delays and customer complaints. Frontier