This Monday’s Business Traveler newsletter was almost delayed because the Skift corporate jet spent a large part of the morning circling above London’s Heathrow Airport. It’s a pretty common occurrence for business travelers in Heathrow — if your flight gets in two minutes early, one minute late or is subject to any sort of inconsistency in its flight plan, you’re going to end up circling over downtown London.

Why so much circling? Because Heathrow, the biggest hub through which all UK flights connect and the arguable front door to the region’s economy only has two runways.

San Francisco has four. So does JFK and Frankfurt. Atlanta has five and O’Hare has something like 40. Even freaking Cleveland has three runways, and they lost their city status ten years ago.

Heathrow’s expansion, as you guessed, has been mired in politics. On one side, the vast majority knows that economic growth comes from the basic ability to let people into your country. But a strong rebel faction wants to cut down on noise and any further construction.

To me, both sides look too far beyond the basic of need of today’s business traveler: We just can’t get in to Heathrow on time. Fix that, then worry about politics later.

Circling the air above heathrow is like a slow flush down the aviation loo. U.S. Airlines Vs. Gulf Carriers: What Open Skies Battle Means for Consumers: If you have to fly from New York to New Delhi on April 1, you can book through one of the three big U.S. airlines for at least $1,100 round trip. Or you can take one of Emirates’ luxurious Airbus A380s for less than $900. That choice is at the heart of the complaint raised by Delta, American and United Continental with U.S. regulators. Read more at Skift

Inside Delta Air Lines’ Hollywood to SXSW Party Plane: Everyone on Delta Air Lines Inc.’s 11:30 a.m. flight from Los Angeles to the South by Southwest festival on Friday will get expedited security processing, complimentary cocktails and a chance to win first-class tickets to London and New York. Read more at Skift

Strike by Norwegian Air Pilot Ends 11-Day Action Against Low-Cost Carrier: Hundreds of pilots flying for Norwegian Air Shuttle have called off an 11-day strike that affected about 200,000 passengers after reaching a deal Tuesday with the budget airline. Read more at Skift United Steps Up Its Domestic Airport Lounge Game: Airport lounges have suffered over the last dozen years as airlines repeatedly cut back on amenities and terminals improved their own offerings. Read more at Skift

Ryanair Makes Valencia’s Notorious Ghost Airport Its New Spanish Home: Ryanair has reached an agreement to bring one of the world’s most notorious ghost airports to life. Read more at Skift 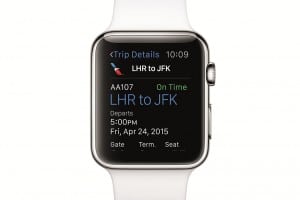 Yelp CFO: We Will Win Despite Google Roadblocks: Yelp, which plans to double its online and offline marketing spend to $20 million in 2015, will “win” in the long run despite Google’s “roadblocks.” That’s the view of Yelp CFO Rob Krolik, who spoke at the Piper Jaffray Technology, Media and Telecommunications Conference in New York City March 11 and discussed Google’s algorithmic tweaks and the alleged roadblocks that Google presents to Yelp’s users. Read more at Skift

Big Taxi Turns to Smarter PR and Better Apps to Take on Uber: David Sutton is looking for the worst possible news about Uber Technologies. Sutton is a hired gun in the dirty war that’s broken out between old-line taxi companies and Uber, the ride-share phenom. His client, a powerful trade association, represents 1,000 taxi and limousine firms worldwide. These firms want to kill the young juggernaut—or at least buy themselves enough time to develop rival car-hailing apps. Read more at Skift

All the Apple Watch Travel Apps Ready for Launch: Five months after revealing the Apple Watch, the company today announced pricing for the device as well as a release dates and more details about its features. Read more at Skift

Top Hotel CEOs Say the Industry Won’t Copy Airlines With Fee Frenzy: Airline fees may be the bane of many travelers, but other sectors of the travel industry look with envy at this easy source of revenue. But will they be as successful getting consumers to hand over more money? Read more at Skift

U.S. Leads the Charge as Hotel Prices Increase Globally for the Fifth Year in a Row: Each year, Hotels.com publishes the Hotel Price Index, which details the rise or decline in global room rates. Although most of the world saw an increase in the average cost of a hotel room in 2014, according to the most recent report, North America was an over-achiever, achieving the highest regional increase rate of 5 percent. Read more at Flyertalk

Qatar Airways Getting Into Hotel Business With Heathrow Purchase: Qatar Airways bought the Sheraton Skyline Hotel at London Heathrow’s airport in a first foray into lodgings outside the Gulf, and said it’s planning to add further properties in the U.K. and North America. Read more at Skift

Broke Ass Stuart’s Kinda Late Show is picking up steam. On its most recent episode they interview the Double Rainbow fella.