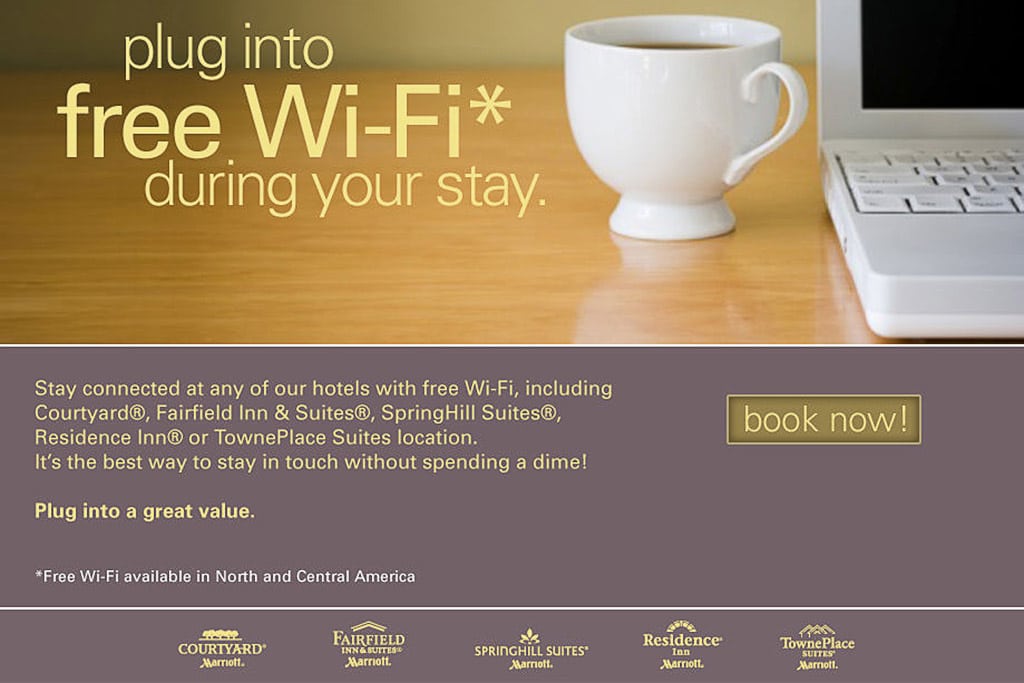 Thanks to literally every single technology-literate human being throwing a fit over Marriott blocking Wi-Fi hotspots, Marriott backed down from its draconian plans last night. Our own Dennis Schaal did some great reporting on the news here.

Whether this strategy will stick is anyone’s guess. Marriott continues to press for clear rules from the FCC on what can and cannot be blocked, and as Dennis rightly points out, once they find a loophole they’ll take it. Perhaps some day when internet is classified as a public utility the rules will become clear. Like water or electricity, hotels shouldn’t charge for Wi-Fi.

Here is what I am not clear on. How did they think they were going to get away with this in the first place? I mean were guests simply going to roll over while they say you cannot use your own devices?

– ZenMaster re: Marriott WiFi on Engadget JetBlue’s Impending Bag Fees May Already Be Hurting Its Brand Reputation: JetBlue’s brand reputation took a hit over the recent holiday travel period among likely travelers, and it hasn’t even implemented its new bag-fee policy yet. Read more at Skift

Comparing United and American Airlines’ Latest Bid for Business Travelers’ Loyalty: On the surface, the American and United promotions are quite similar. High-level elites booking premium (first or business) cabins can earn up to 12,000 bonus award miles per long haul segment while standard loyalty members earn 3,000. Digging a bit deeper though, differences start to emerge. Read more at Skift

Thieves Targeted American Air and United’s Loyalty Programs: Thieves with stolen usernames and passwords have broken into customer accounts at American and United airlines and in some cases booked free trips or upgrades. Read more at Skift

Air France Shows How Great Aircraft Interiors Come Together: If you’ve wondered what it takes to get those lovely cabin interiors renderings to fly, Air France has released a new video which gives us all a peek behind the curtains. Read more at Skift

London’s Heathrow Can’t Match the Growth of Gatwick Airport: London’s Heathrow airport, which has operated close to capacity since the start of the decade, boosted passenger numbers 1.4 percent to 73.4 million last year as airlines deployed larger jets to make the best use of slots. Read more at Skift

CBP Preclearance Facility in Abu Dhabi Expands to Cover All Etihad Flights Bound for U.S.: Etihad Airways flyers traveling from Abu Dhabi International Airport (AUH) to the U.S. will soon be able to clear customs before they arrive. Earlier this week, the UAE flag carrier announced that preclearance through U.S. Customs and Border Protection (CBP) will be available for all Etihad passengers starting Thursday. Read more at FlyerTalk

United Airlines Wants to Outsource 2,000 Airport Jobs to Save Money: United Airlines is considering cutting up to 2,000 jobs at 28 airports around the country and hiring a contractor to do the work. Read more at Skift First Travel Impact From Paris Attacks: EU Parliament May Revive Air-Passenger Terrorism Law: The European Parliament may revive draft legislation that would force airlines to give national governments in Europe information on passengers, highlighting renewed terrorism concerns after the attacks in Paris. Read more at Skift

Marriott Bows to Pressure on Wi-Fi Blocking But There’s Lots of Wiggle Room: Facing a firestorm of criticism from frequent guests as well as Google, Microsoft and the news media, Marriott International has backtracked in its bid to block consumers’ personal Wi-Fi devices during conferences at properties that it manages, but the chain and the entire U.S. hotel industry still have plenty of wiggle room. Read more at Skift Interview: Relais & Châteaux CEO on Maintaining Experiential Standards: In the vast space between independent hotels and global hotel brands sit several hospitality consortia and organizations that provide some of the same marketing and promotional functions as large operators while remaining dedicated to the unique characteristics of their portfolio properties. Read more at Skift

Anyone interested in picking up (or unloading) expiring upgrades might be interested in checking out the exchange started over at The Points Guy. Come one come all.