Business-to-business travel startups are loosening their top buttons when it comes to how they socially connect to fans and prospects.

All things considered — company size, budget and resources — these startups need to be selective about the social media platforms they commit to.

Adara, Boxever, Rezdy, and Xola understand that the audience has different expectations on each network. In the early stage, the goal is often to build awareness and consideration through content production and curation; introduce and celebrate the team; and motivate potential customers to access free resources, often in exchange for their email addresses.

These elements can then lead to offline conversations.

Given that startups usually have their heads down as they toil at refining their product during launch, creating a brand presence on social media becomes more feasible at a later date, sometimes around year three.

Anecdotally, B2B travel startups started to become more competitive on social in 2013 and this trend highlights how other companies need to follow suit regardless of their stage of development or how far they are from their launch dates.

Just as more established B2B travel technology companies are humanizing their brands on social, B2B travel startups are learning to differentiate their content on LinkedIn, Twitter and Facebook and are moving away from a business tone to more casual talk.

Here’s how four startups position themselves to leverage their brands’ presence on social media — not indicative of the actual succeess of their product:

Adara, founded in 2009, uses its data trove to connect online advertisers with potential customers. The company has been heavily focused on product and business development, and this year it is doubling down in  social media and seeking inspiration from business-to-consumer companies. Adara recently hired agency partners to help implement its social media strategy and to serve as a sounding board.

Elizabeth Harz, Adara’s President, Media said, “Overall, like other B2B companies, we see a growing need to expand our social media efforts to better understand what our clients need to be successful.” Although Adara’s strongest presence is on LinkedIn, it hopes to fine-tune its content and engagement approach for each platform. Boxever Contributes to the Dialogue

Big data is a hot topic for most enterprises. Boxever, founded in 2011, unifies customer data to provide a more personalized way to understand, reach, and convert flyers. According to Allyson Pelletier, VP of Marketing at Boxever, “Since we’re a B2B company, we’re really trying to get in front of business buyers. From a lead-generation perspective, it’s really less about calls to action and it’s really more about participating in the [broader] conversation that’s going on in these environments.”

Boxever is participating on Twitter and LinkedIn, and the team has seen new faces pop up on both networks. When asked about not having a presence on Facebook, officials say it would take a deep commitment, and the team is focusing instead on business-oriented conversations. 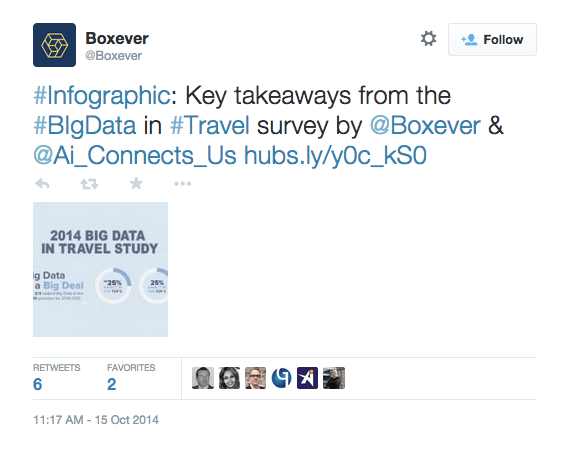 Thought leadership is essential to building a reputation as an expert. Rezdy, launched in 2011, is a white-label booking platform that caters to 50 verticals, including whale watching and surfing, and 12 product types such as multi-day tickets, rentals and lessons.

Rezdy’s social team shares thoughtful information with the community, but takes it a step further. Christabell Tani, Marketing Manager at Rezdy, said that they searched for groups with relevant topics and posted helpful tips that created new customer interactions. Though you can’t see this type of activity on its LinkedIn profile, Tani said it translated to click-throughs and moved conversations to the second part of the sales funnel — consideration.

Despite Rezdy’s larger audience on Facebook, LinkedIn has a more captive audience. Tani explained, “On Facebook, we’re constrained for time to be more conversational; it takes time and effort to build the community. We’re looking to humanize our brand more on LinkedIn.” 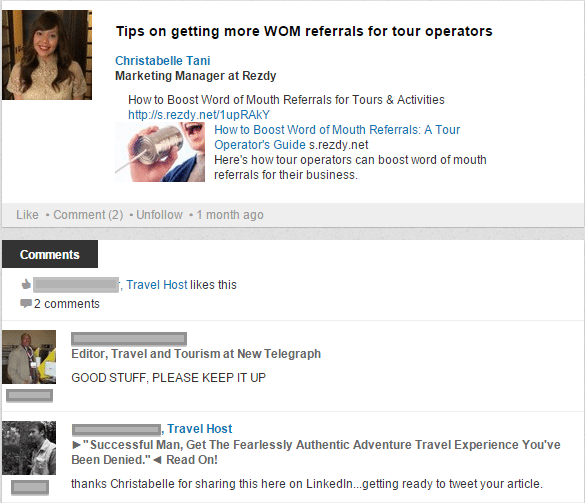 Xola Gets Methodical and Casual

Transitioning from a beta to market is a process. “When our customers started saying, ‘Wow, you really helped my business, and we have other businesses that may benefit and refer to Xola,’ that’s a good litmus test when you’re ready to go to market, said Scott Zimmerman, CEO at Xola, which was founded in 2011. That started happening in 2013, and in September, Xola hired Julia Barrero to lead Content & Strategic Marketing.

In this short period of time, Barrero claimed that the web traffic from social media rose from 8% to a third, and HubSpot data showed Facebook as the primary driver at 52%, which was larger than the contribution from Twitter and Google+. The current social strategy is proving effective, Barrero said.

Xola, which offers a booking and marketing platform for tours and activities providers, sees the content having a longer life on Facebook than on Twitter so that’s where it chooses to be more present and open about the company’s personality. Company photo posts that are timely and fun can take an inside joke to build considerable kudos from fans.
Post by Xola.