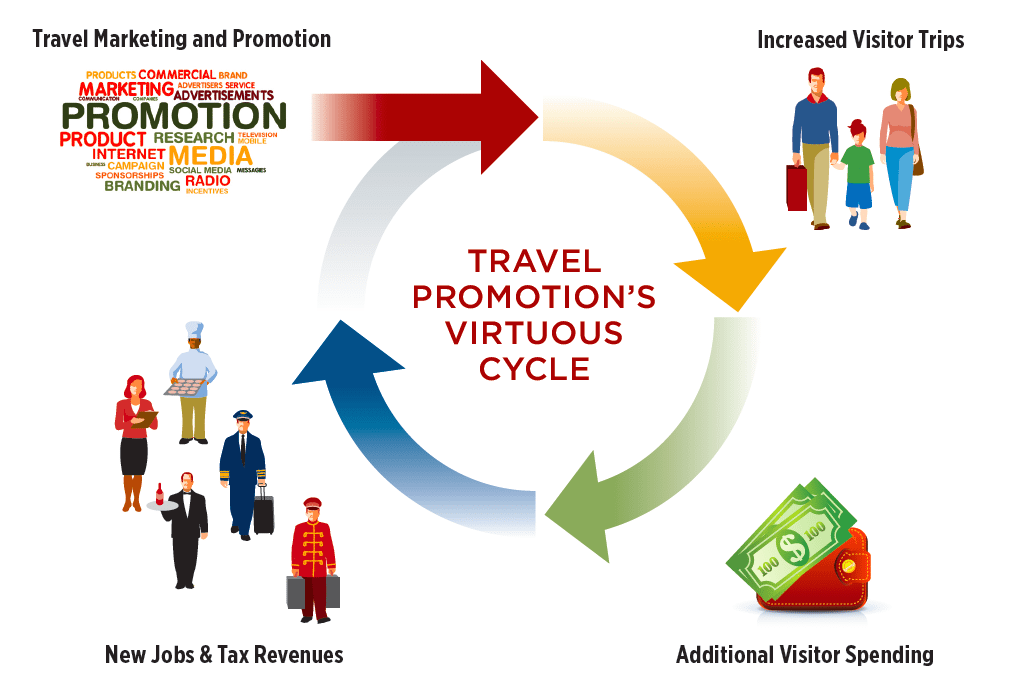 Claims of an unyielding network effect are often so much hot air such as when Expedia claims that it has "mutually beneficial supply agreements" that reinforce its global marketplace. Still, when companies such as TripAdvisor, which attracts more than 100 user reviews and ratings per minute, truly achieve a network effect, their growth can be exponential.

It is sometimes a wonder that so many travel startups fail and that even mature travel businesses slump when you consider that companies such as Expedia, GoPro, TripAdvisor, and Sabre make it all look so easy as they tout their purported “virtuous circles” or “virtuous cycles,” and paint a portrait of seemingly unrelenting growth.

What is the “virtuous cycle” and why does it matter?

Consider that Expedia over the years has published depictions of its virtuous circle and virtuous cycle (2010), noting that “scale drives opportunity to enhance supplier, traveler & advertiser value propositions,” and this, in turn, “rewards stakeholders.” It is ironic that despite the network effects of Expedia’s “volume and global reach” and the consequent impact on travelers, supplier partners and advertisers, Expedia’s king-of-the-hill status has been toppled by TripAdvisor as the “largest online travel company in the world.” TripAdvisor touts the attractiveness of its business model, where content brings eyeballs, “audience drives leads,” and community builds content, which leads to ever larger audiences. The latest stock-market IPO darling, GoPro, which raised $427 million at its Nasdaq debut, states: “We believe our business focus results in a virtuous cycle and a self-reinforcing consumer acquisition model that fuels our growth. Our products in the hands of our customers enable compelling, authentic content that organically increases awareness for GoPro and drives demand for our products.”

Note to GoPro: As a mobile and video-gadget company, couldn’t you have come up with a virtuous cycle graphic that was a bit more visually appealing?

If numerous travel companies tout their potential for endless expansion a bit too vociferously in these virtuous cycle/circle graphics, then Rich Barton, venture partner at at Benchmark Capital and founder of Expedia, argues that many companies confuse the distinction between scale and a network effect.

Inside and outside travel, a network effect is often the holy grail.

“However, everyone wants one, and what happens is they confuse economies of scale with a network effect, conveniently,” Barton says. “They think, well, business gets better as we get bigger, costs go down etc. No. To have a true network effect the value of the nth user must bring non-linear benefit to the whole system, entrenching a platform.”

A Bit Fluffy, But Some Truth in Virtuous Cycles

Jeff Richards, managing partner of GGV Capital, says virtuous cycles sound a “bit fluffy,” but they can be “accurate to some degree. Scale is a big deal in Internet and mobile businesses. I’m not sure how ‘virtuous’ they are (virtuous means ‘having or showing high moral standards’).”

“Scale enables economies of scale,” Richards says. “It tends to drive down prices for consumers, which is a good thing. Prices going down for consumers means somewhere margin has come out of the system. Travel agents — gone. Hotels charging consumers full price at the last minute — gone.”

When companies reach scale, Richards says, this spurs technology investment, which can “drive better experience for both supply and demand.”

But scale, Richards says, isn’t the be-all and end-all.

In other words, innovation can trump virtuous circles and damage the perfect circle.

“Perhaps it is ‘virtuous’ for the innovators, consumers, and suppliers who embrace the innovation,” Richards says. Not so virtuous for incumbent players who can’t adapt. Unless you have a fixed supply with high cost of entry and regulation (see airlines).”

Among other examples of travel businesses and organizations waxing on about the benefits of the virtuous cycles they embrace:

U.S. Travel boats of the virtuous cycle inherent when travel advertising triggers an increase in visitors, visitor spending, as well as new jobs and tax revenue. On the virtuous cycle of travel marketing and promotion, Chicke Fitzgerald, CEO of Solutionz Holdings, says “the challenge is that all investment in innovation in the industry continues to focus on inspiring vacation travel (which represents just 8% of overnight travel in the US) and capitalizing on business travel (25% of overnight trips), when travel spending really comes from the other 67% of travel that is pure ‘life’ (care travel, event travel, life event travel).”

“Investment in the niche that is vacation and business travel is simply not sustainable long term,” Fitzgerald says. “You can’t serve 32 people in a room of 100 and ignore the other 67. “It just doesn’t work.”

Travel tech com pay Sabre didn’t publish a graphic, but described its own alleged virtuous cycle in its IPO papers:

Consultant Daniel Edward Craig of Reknown argues that the reputation management industry is one big virtuous circle where user reviews trigger hotel improvements, which lead to greater  guest satisfaction, better reviews and increased demand — and so on. Whether it is the purported virtuous cycles of Expedia, TripAdvisor, GoPro, Sabre or other travel businesses employing this online travel meme, creating and maintaining a network effect is never as simple a proposition as they portray.

Savvy investors cut through the fluff and decide for themselves whether the virtuous circles are really myth or viable growth tracks.