Skift Take
Google could nab Yelp, but after Zagat and Frommer’s and the impending death of Google Plus, how much more destination info does it really need? OpenTable seems like the much more attractive target.
— Jason Clampet
Share
Tweet
Share
Post
Send

Google, Yahoo! Inc. or Facebook could go after Yelp to get a slice of the $75 billion in local advertising spending that’s moving away from traditional sources such as newspapers, B. Riley & Co. said. EBay Inc. could be another suitor for Yelp, according to MKM Partners LLC. Yahoo — poised to get a more than $10 billion windfall when Alibaba Group Holding Ltd. goes public — also could be interested in now-cheaper targets such as smartphone advertiser Millennial Media Inc. and Pandora Media Inc., said CRT Capital Group LLC.

“Some deals that were just out of reach before may now happen,” Rob Sanderson, an analyst at Stamford, Connecticut- based MKM, said in a phone interview. “There’s sort of a new- guard/old-guard thing going on in the Internet sector and the new breed of companies is growing very, very fast. The old-guard companies, like EBay or Google or Yahoo, would like to get more exposure to these areas.”

Representatives for Yelp, OpenTable, Pandora, Yahoo, Facebook, Google and EBay — all based in California — declined to comment, as did a representative for Baltimore-based Millennial Media.

Technology shares erased some gains from a rally in the Nasdaq Composite Index that drove valuations to about double that of the broader S&P 500 benchmark in March. The Nasdaq has since fallen 6.6 percent from its March 5 high.

The decline has more to do with a shift in the way investors are assessing these high-growth stocks, and less to do with companies’ individual earnings power, Sanderson said.

“There’s always something on the margin here or there for each of these companies, but nothing fundamental that would change the opportunity or the outlook,” Sanderson said. This “is an exceptional buying opportunity” for shareholders.

The same may also be true for corporate acquirers, he said.

Yelp is down 45 percent from its 52-week high of $98.04. Last week, shares of the San Francisco-based company fell to 13.4 times its sales in the past year, the lowest multiple since July. 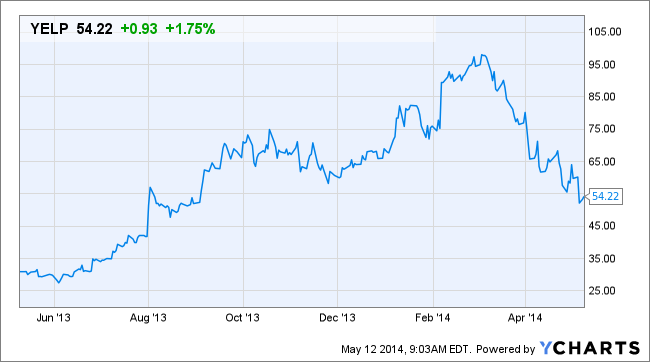 For interested buyers, which also may include Apple Inc., “it’s definitely easier to justify the price,” Blake Harper, a Baltimore-based analyst at Wunderlich Securities Inc., said in a phone interview. Yelp, which closed last week at $54.22, has a market value of $3.9 billion.

Buying Yelp would help larger technology providers gain a stronger presence in local advertising as about $75 billion in spending that had been earmarked for traditional platforms comes up for grabs over the next five years, said Sameet Sinha, a San Francisco-based analyst at B. Riley.

“Local advertising is a nut that nobody has been able to crack,” Sinha said in a phone interview. “But now I think there’s actually an imperative to crack that nut. And Yelp is a premium property there. It is well-known, well-regarded among most consumers.” 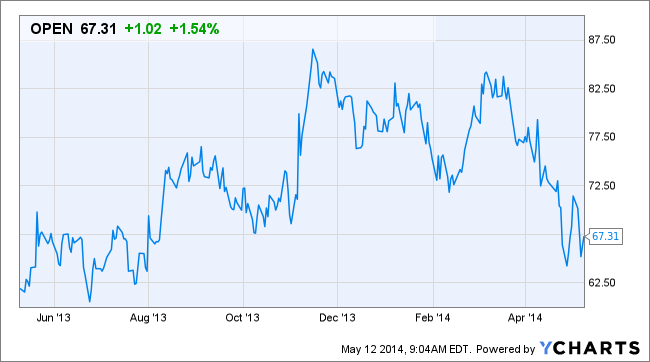 Yelp’s restaurant and bar reviews are increasingly accessed through mobile devices, which may appeal to companies that are trying to stay ahead of a consumer shift to smartphones, said Tom White, a New York-based analyst at Macquarie. For EBay, Yelp offers the local business relationships and mobile-user base needed to draw more consumers to its pay-by-smartphone platform, said Sanderson of MKM.

Yelp’s revenue multiple is still more than double the median for U.S.-based Internet media and services companies valued at more than $1 billion, according to data compiled by Bloomberg. And any buyer may have to offer more than the company’s March high, at least an 81 percent premium, to get a deal done, said Kerry Rice of Needham & Co.

“I don’t think there’s any reason for them to have to sell the company,” the San Francisco-based analyst said in a phone interview. “Unless it’s a very attractive offer, I don’t think it would be consummated.”

For buyers looking for a cheaper option, OpenTable may be an enticing target, said White of Macquarie. With a price-sales multiple of 7.9, San Francisco-based OpenTable trades at about a more than 40 percent discount to Yelp, according to data compiled by Bloomberg. The company’s market value of $1.6 billion is less than half that of Yelp.

OpenTable “would be a good asset for anyone trying to build out a local or mobile ecosystem,” White said in a phone interview. It “checks a lot of the same boxes” as Yelp.

Analysts forecast a 57 percent climb in Yelp’s revenue this year alone and a 19 percent rise at OpenTable, compared with a 13 percent slide in sales at Google and a 4 percent decline at Yahoo, according to estimates compiled by Bloomberg.

Other acquisition candidates may include Pandora or Millennial Media, which have slumped 15 percent and 54 percent, respectively, so far this year, said Neil Doshi, a San Francisco-based analyst at CRT Capital.

Pandora is a leader in online radio and has been able to thwart most competitive threats so far, said Doshi, who sees the $4.6 billion company luring Google, Yahoo or Apple. Millennial Media, which sells advertising space on mobile devices, may appeal to Google or Yahoo as way to expand their reach in one of the fastest growing digital marketing areas, he said.

With assistance from Anthony Palazzo in Los Angeles, Olga Kharif in Portland and Leslie Picker in New York.