Skift Take
Despite the disruptive weather, it was a strong first quarter for U.S. airlines — even the ones everybody complains about. That is if your name isn’t spelled U-N-I-T-E-D.
— Jason Clampet
Share
Tweet
Share
Post
Send

Despite having its fifth year in a row as the most complained about airline in the United States, Spirit Airlines posted strong first quarter earnings today, driven largely by passenger growth.

For the first quarter 2014, Spirit’s total operating revenue was $438.0 million, an increase of 18.2 percent compared to the first quarter 2013. Adjusted net income was $37.8 million and GAAP net income was $37.7 million. This helped Spirit realize a pre-tax margin of 13.7 percent compared to 14.4 last year, as well as helps continue the airline’s position as the most profitable airline in the U.S.

“During the first quarter, our team did a great job serving our customers while overcoming the challenges caused by numerous severe winter storms and managing to the new crew duty and rest rules,” said Ben Baldanza, Spirit’s Chief Executive Officer.

“Our solid operational and financial performance in the first quarter is a great start to the year and provides a firm foundation as we grow our business and bring our low fares to more people in more places.”

Weather caused Spirit to cancel 256 flights this quarter as opposed to 59 the previous year. Compared to the tens of thousands of flights cancelled by United, JetBlue, and American, this was minor.

Although it’s fighting to end price transparency in Washington, D.C., Spirit breaks down where that $134.20 comes from. Average ticket revenue per passenger flight segment was $77.79, meaning the average passenger pays an additional $46.41 in fees. That means that, on average, fees at Spirit increase the cost of a ticket by 60% of cost of the fare.

Spirit also took delivery of two new Airbus A320 aircraft in the quarter and spent $73.2 million on deposits for new aircraft. 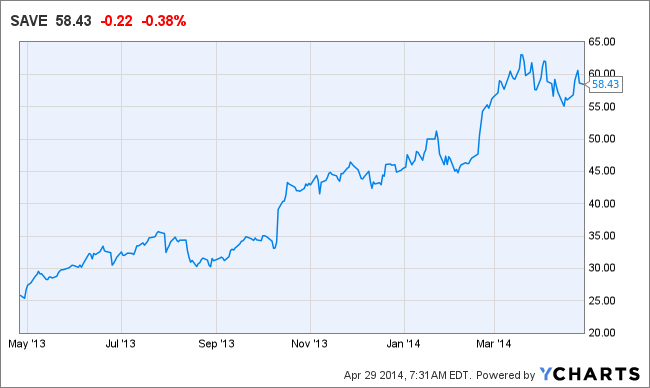 SAVE data by YCharts

Subscribe Now
Tags: earnings, low-cost carriers, spirit airlines
Photo Credit: Spirit did not break down how much it made from advertising on and in its planes. Spirit Airlines