Priceline is the most expensive single stock on the S&P 500, and if it wants to become more accessible with a wider investor base, it might look at the reception to Apple's move and follow.

Apple has long been a trend-setter whose hot products attract imitators, and now its recent stock split might help revive a trend from the 1990s that has all but disappeared on Wall Street.

On Wednesday, the iPad maker and largest U.S. company by market value said it would do a seven-for-one split, knocking its share price down from the $500-plus level to something closer to $75. The stock is up 8 percent on Thursday.

It becomes the fourth member of the S&P 500 to announce a split in 2014. That is a pretty paltry pace when compared with the late 90s, when nearly 100 companies split their stock to attract more investors. Apple Inc’s move might inspire others, some believe, but only modestly.

“It could become a bit of a trend when you see a name like Apple decide to split the stock,” said Ken Polcari, director of the NYSE floor division at O’Neil Securities.

Polcari said Priceline Group Inc, the most expensive single stock on the S&P 500, is a prime candidate. Other pricey stocks such as Chipotle Mexican Grill Inc, trading above $500, or Amazon.com Inc, above $300, could follow.

“You get stocks like Priceline that trade above $1,200 – maybe they’ll look at this, see the excitement it generates and decide to do the same thing,” Polcari said. “Google also sticks out there as a potential name that could be split with no problem.”

Stock splits do not change the value of the company, one reason why Apple CEO Tim Cook said just two years ago that a split does “nothing.”

That is a view many corporate managers shared in recent years, as the institutional investors who own the vast majority of shares are not concerned about individual share prices. 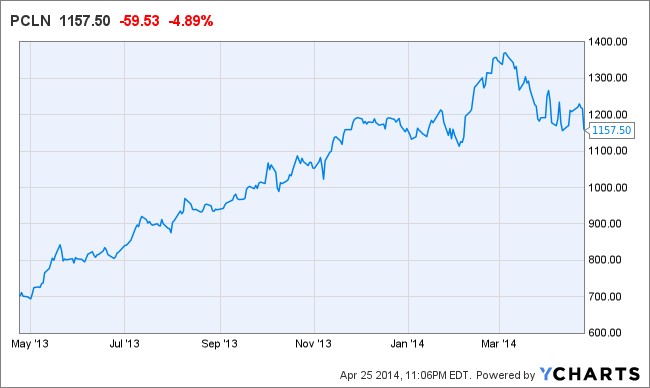 According to Standard & Poor’s, in every year between 1997 and 1999 at least 90 S&P components split their stock. After the dot-com bubble burst, splits went out of favor and have become uncommon. There have been just 75 splits since 2008.

Cook now feels differently, saying on Wednesday that the company was taking the action “to make Apple stock more accessible to a larger number of investors.”

Apple currently carries the third-highest price in the S&P 500, behind Priceline’s $1,219.95 and Graham Holdings Co’s $690.68. In the broader S&P 1500 Composite Index , there are 26 companies trading at $200 or more a share, including well-known names such as Visa Inc and Regeneron Pharmaceuticals Inc.

“I think other companies will follow suit because it’s difficult to buy round lots when a stock price gets too high,” said Kim Forrest, senior equity research analyst, Fort Pitt Capital Group in Pittsburgh.

“Higher prices per stock makes them difficult to buy for $500,000 portfolios.” (Reporting by Rodrigo Campos. Editing by Andre Grenon)